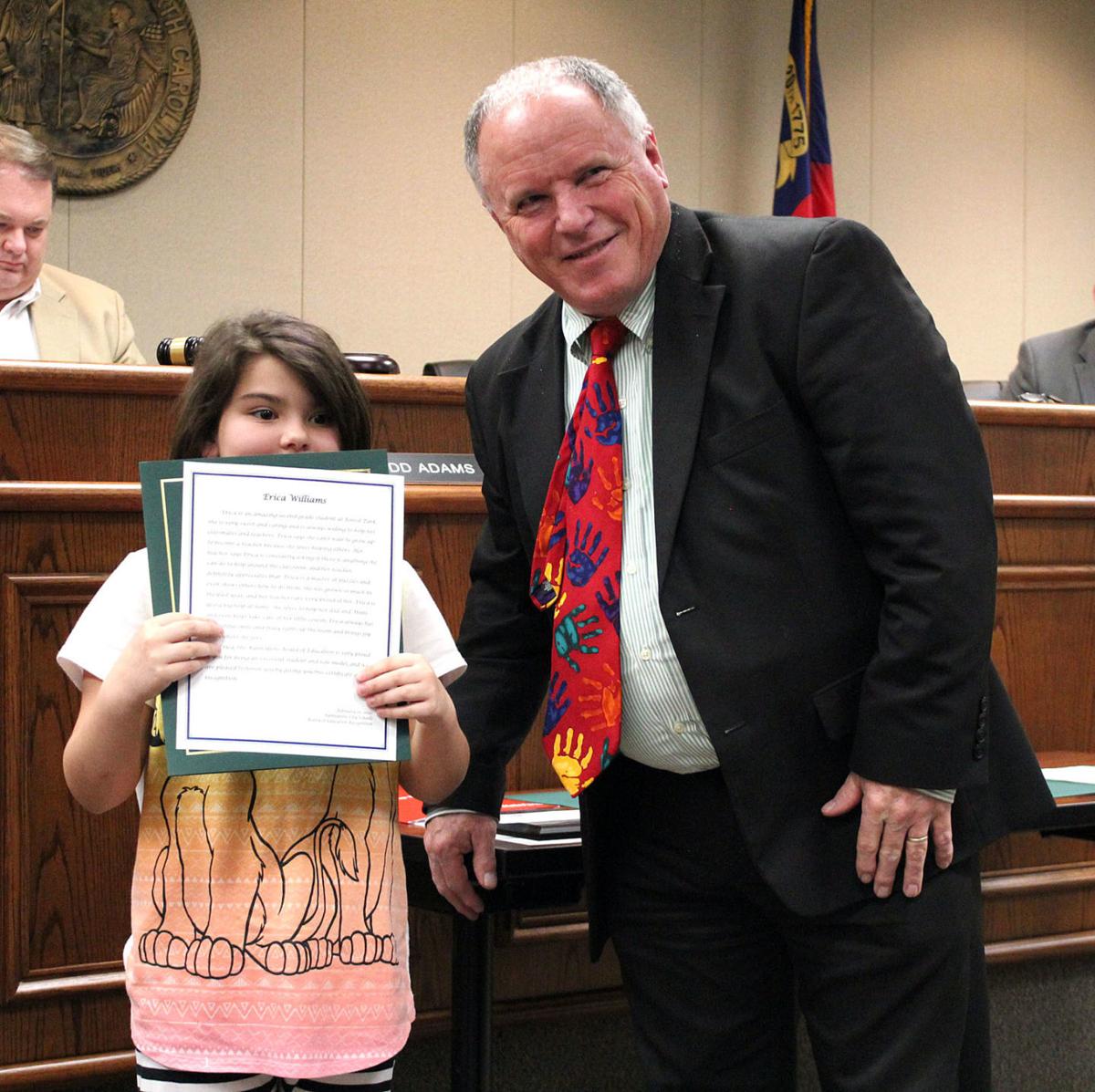 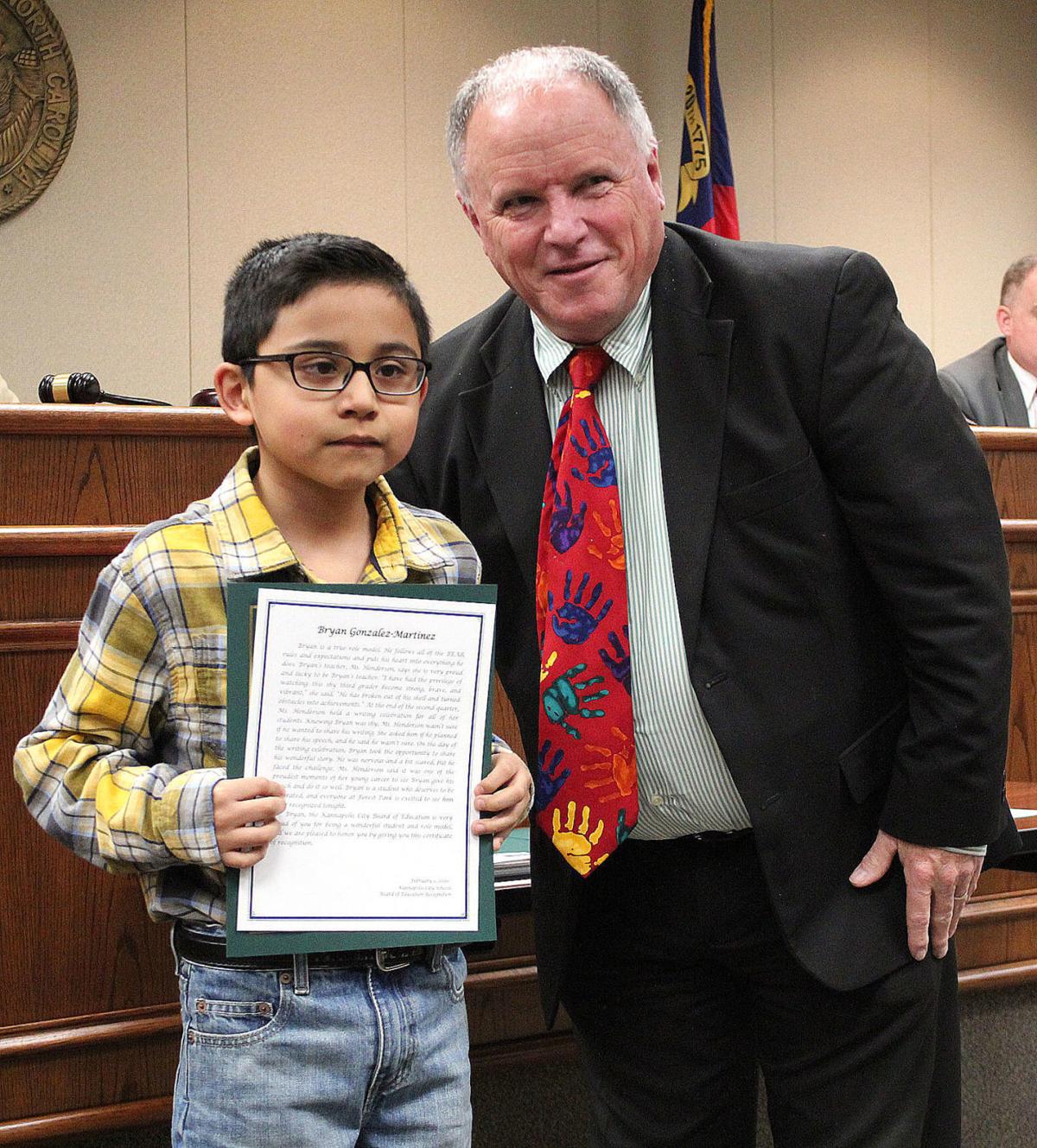 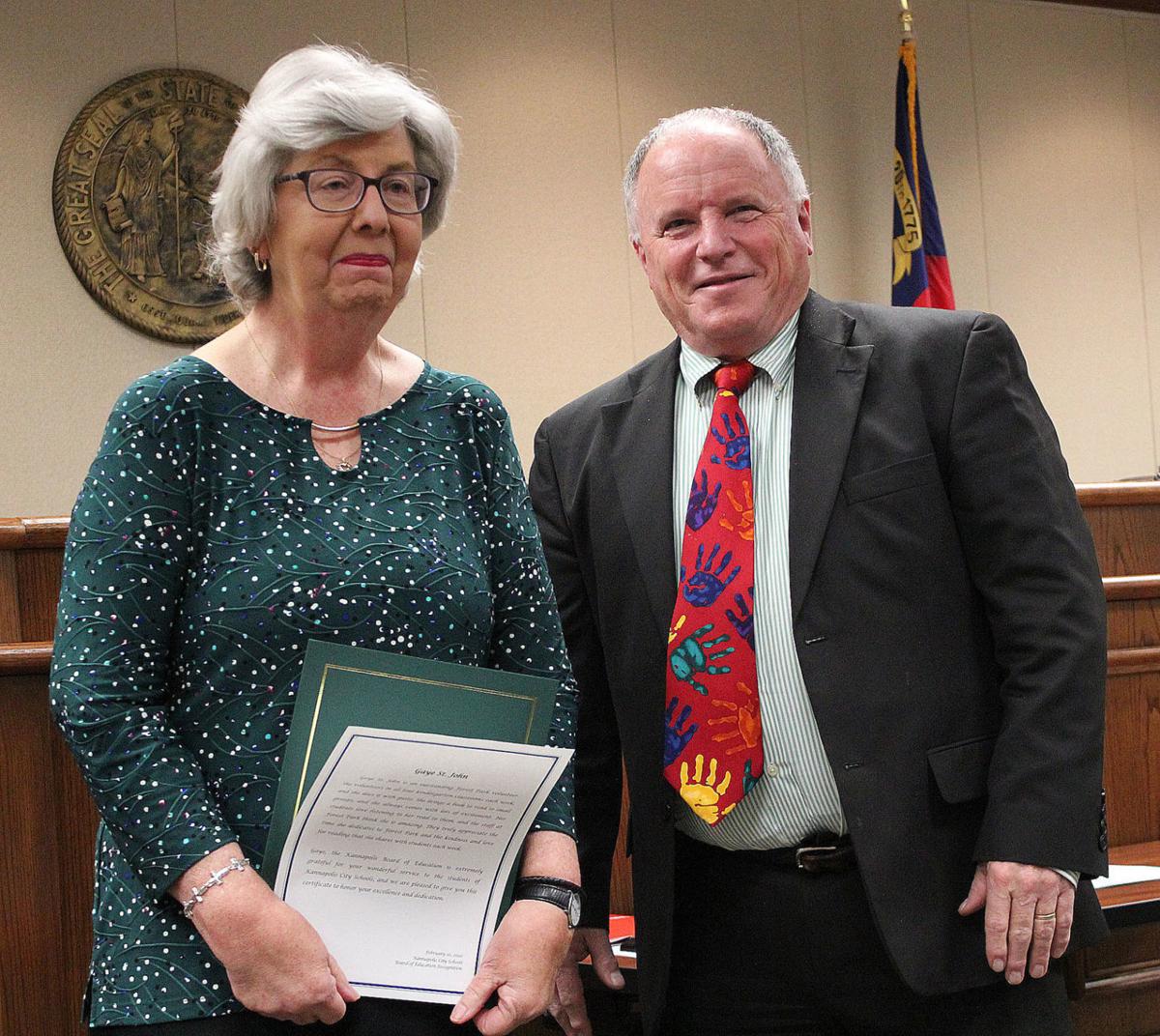 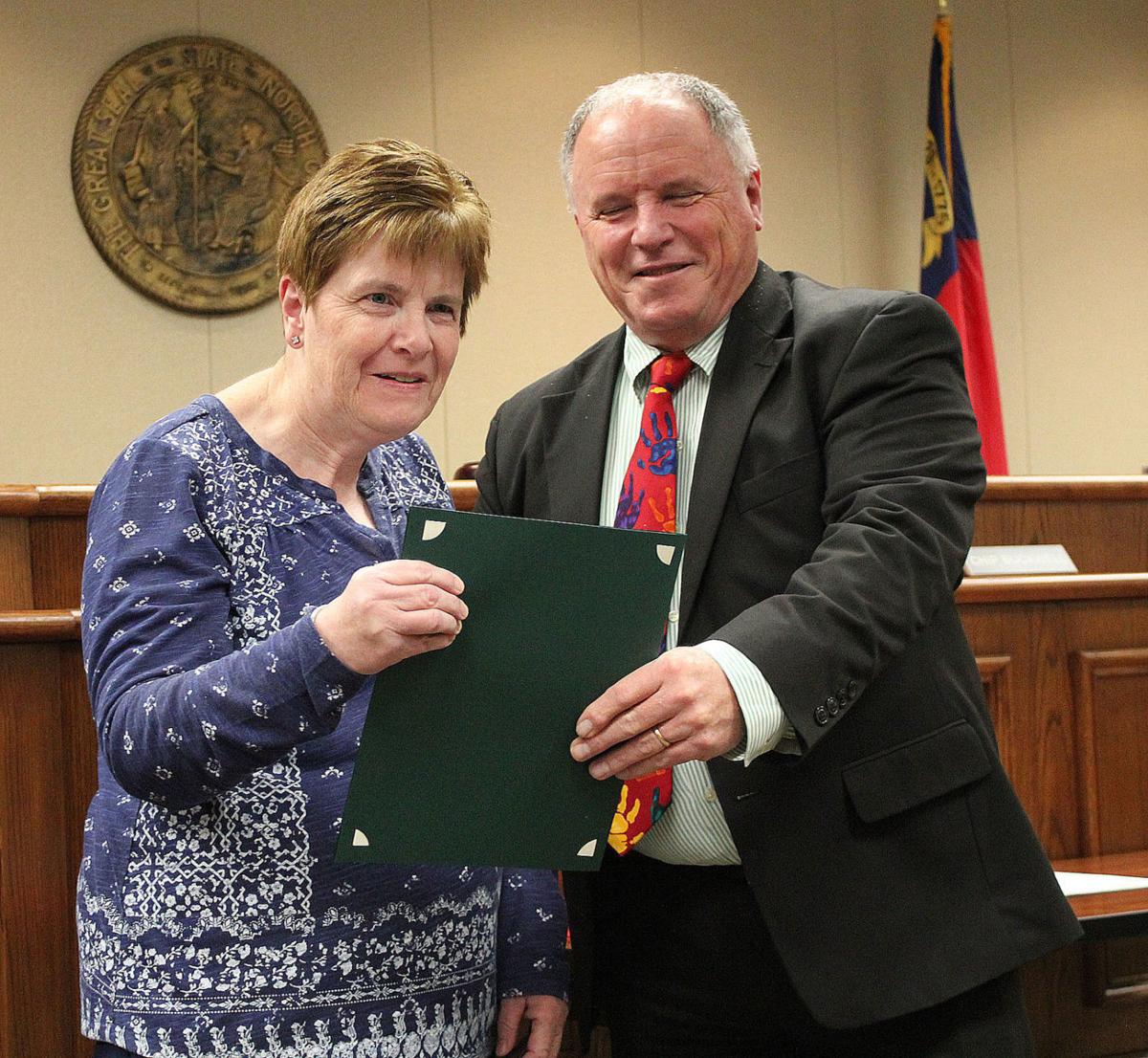 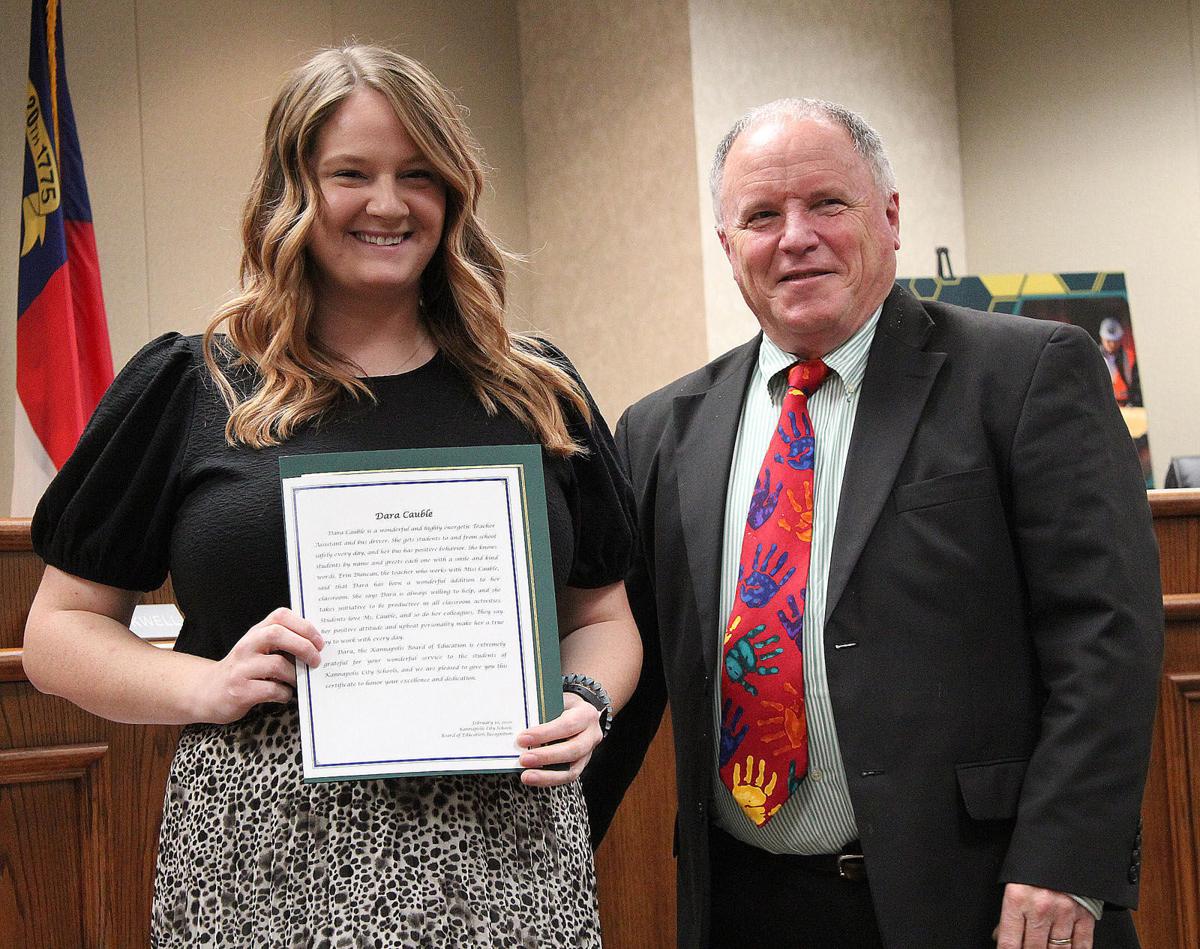 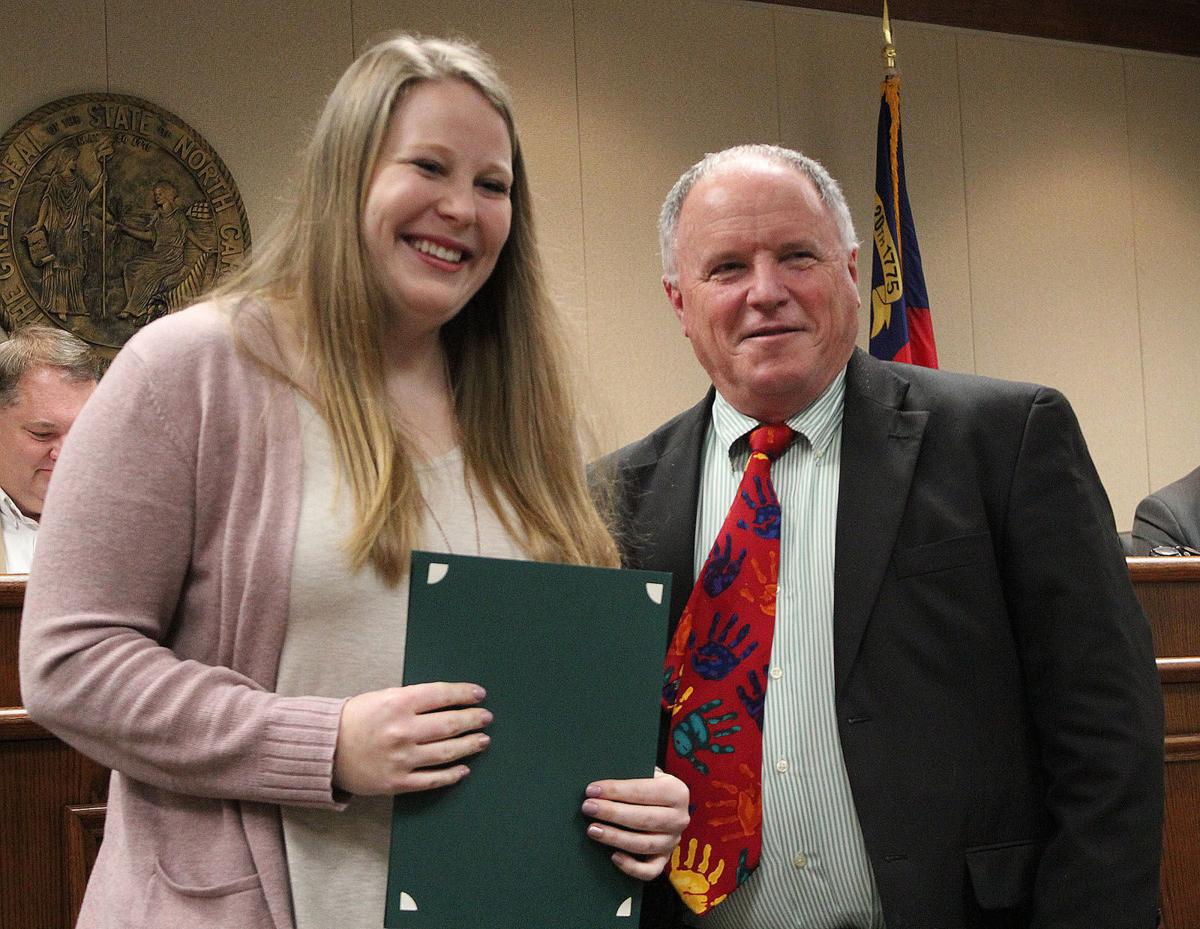 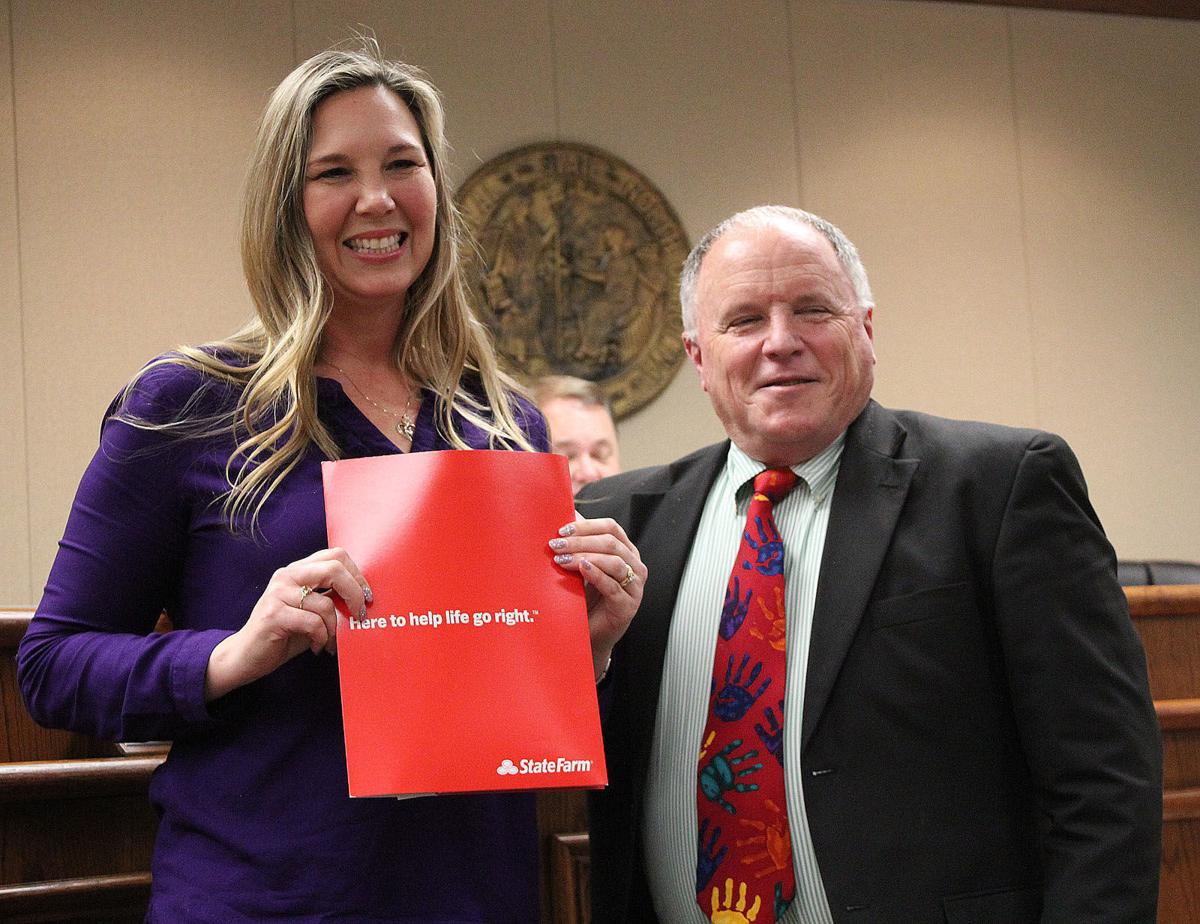 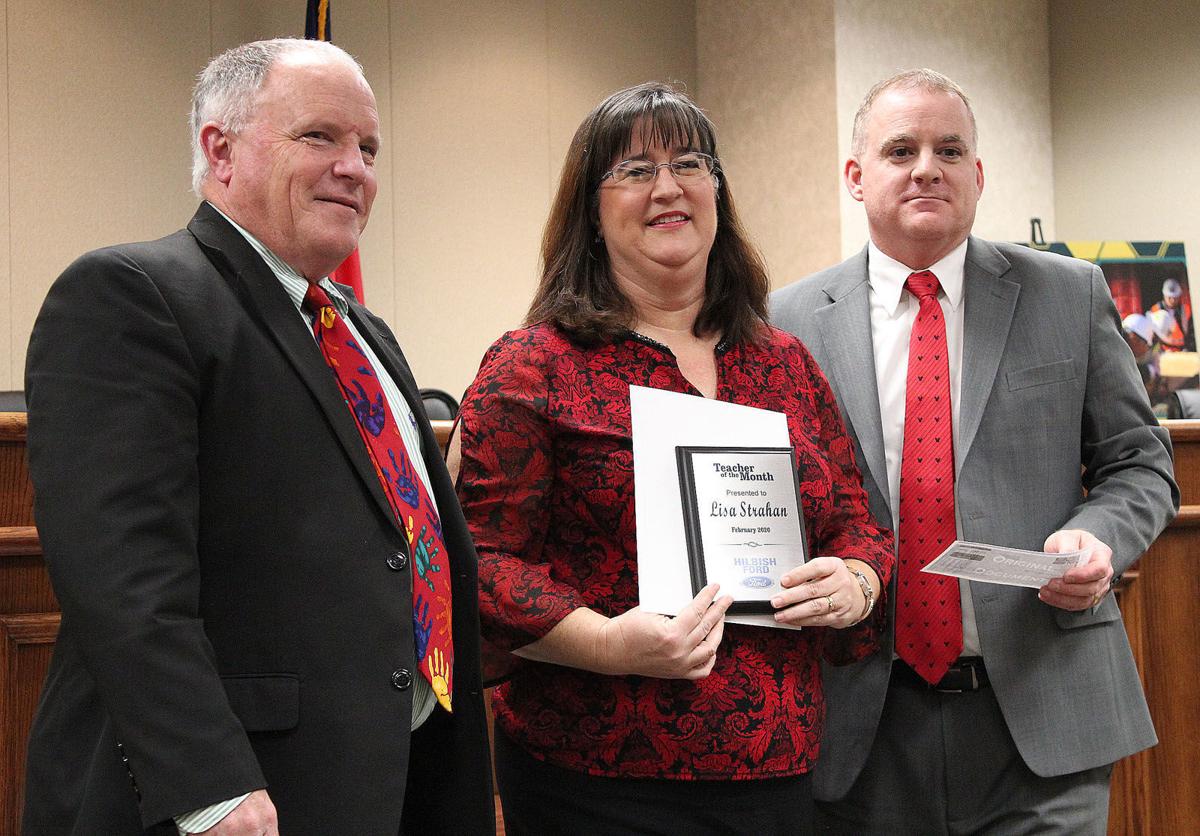 Kannapolis City Schools Board of Education honored Lisa Strahan as the Hilbish Ford Teacher of the Month on Monday. 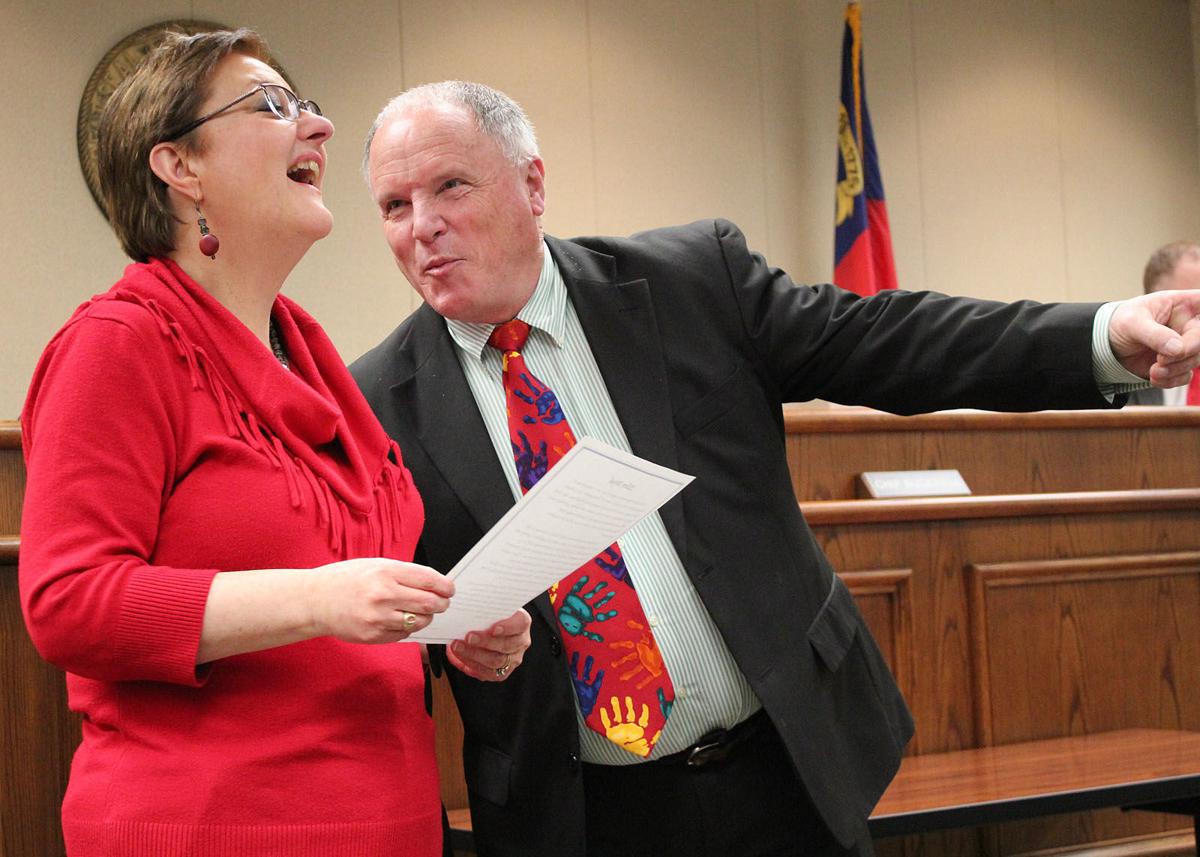 Kannapolis City Schools Board of Education gave special recognition to Director of Community Relations Ellen Boyd at Monday's meeting. Boyd is retiring at the end of the February.

Kannapolis City Schools Board of Education honored Lisa Strahan as the Hilbish Ford Teacher of the Month on Monday.

Kannapolis City Schools Board of Education gave special recognition to Director of Community Relations Ellen Boyd at Monday's meeting. Boyd is retiring at the end of the February.

KANNAPOLIS — The state of North Carolina approved 27 bonuses to teachers in Kannapolis City Schools after their students’ success in testing over the last year. All the bonuses were performance-based and stem from how their classes did on the state’s End of Grade assessments.

In all, the teachers stemming from eight areas of the district received around $94,000 in combined bonuses, with each receiving $2,000 to $6,000. The teachers cannot be named due to confidentiality.

The Kannapolis City Schools Board of Education announced the bonuses at Monday’s meeting.

“It’s really cool that the state did that,” said KCS Superintendent Chip Buckwell. “I wish the state had figured out a way to pass the budget so all the teachers could get a raise out of that, but it wasn’t possible this year.”

This is roughly the same number of teachers who received bonuses for student growth last year as well, according to Buckwell.

And again, as much as Buckwell says he wishes all teachers received bonuses such as this on an annual basis, he was proud to see these educators honored by the state.

“I think it’s significant because it shows that our kids are growing a lot, and our teachers are performing well based on other teachers in the state,” he said. “It’s significant in that teachers deserve more than they get anyway, and this is always helpful to teachers.”

Buckwell wanted to make this clear: He absolutely believes there are better ways to reward teachers.

“I think the biggest mistake we made was when we took teachers basically out of the loop with assessing how the students perform with the grade level because the teacher has them for 170-some days a year, and we assess on four days,” he said. “And those assessments are what count.

“We don’t give teachers enough credit, I don’t believe, for the work that they do, or knowing whether a kid’s performing at grade level or not. We allow that to be assessed by a test, which doesn’t make a whole lot of sense.”

While Monday’s Board of Education meeting in Kannapolis was short — KCS Director of Community Relations Ellen Boyd surmised this set a record for shortest meeting in her time with the district — some important things did go on.

Kannapolis’ CTE programs will be adding a Public Safety program to its offerings as well as an HVAC and Mechatronics program in 2020.

She also said 99 percent of those enrolled in the district’s CTE programs graduate from KCS.

And while this was not mentioned at the meeting, it should be noted that Daryle Adams was named the CTE Administrator of the Year in North Carolina on Tuesday at the state conference.

The Independent Tribune will have more on this story in coming days.

Here is the resolution in its entirety:

“Whereas, in 1997, the General Assembly created the Civil Penalty and Forfeiture Fund in G.S. 115C-457.1 and provided that the clear proceeds of all civil penalties collected by state agencies should be paid into the fund; and

“Whereas, the legislature declared that such funds should be used exclusively for school technology and appropriated to the individual public-school units on a per pupil basis; and Whereas, public school units are in dire need of additional technology funding; and

“Whereas, according to the Department of Public Instruction (DPI), only 38 percent of North Carolina’s 115 local school districts in 2018-19 reported having achieved the State’s 4-year replacement goal for student devices (Chromebook, iPad, laptop, etc.); and

“Whereas, more than 30 percent of school districts in 2018-19 reported having no resources budgeted for replacement devices; and Whereas, investing in current technology is necessary to achieve a 21st century education that utilizes innovative, collaborative, and learner centered experiences; and Whereas, since 2008, the public schools have received only $18.1 million, approximately 2.5 percent of the total amount owed; and

“Whereas, the defendants have not fulfilled their constitutional obligation to make up for the remaining $729,699,823 that was diverted from public schools; and

“Whereas, on March 6, 2019, a consent order was entered to extend the enforceability of the existing unpaid 2008 judgement to prevent it from expiring; and

“Whereas, the plaintiffs have tried to work with state leaders for almost 15 years to find an amicable resolution to this matter; and

“Whereas, the plaintiffs continue to seek a win/win outcome and remain willing and ready to work on a mutually beneficial resolution.

“Therefore, be it resolved that the Kannapolis City Board of Education respectfully requests the General Assembly to approve during its 2020 legislative session a multiyear plan to pay the remaining $729.7 million judgment for civil penalties that should have gone to public school units for school technology but were diverted to other purposes in violation of the North Carolina Constitution.

“Adopted by the Kannapolis City Board of Education this 10th day of February, 2020.”