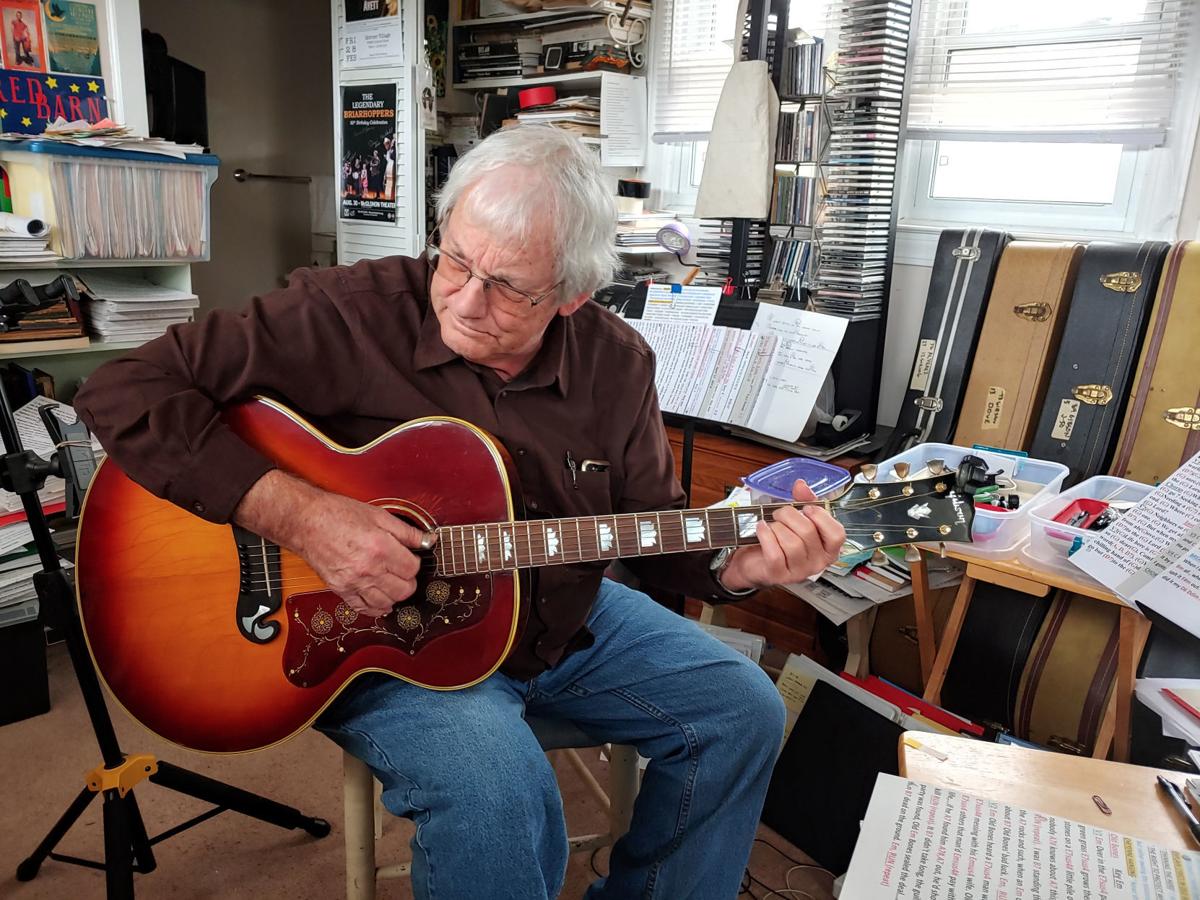 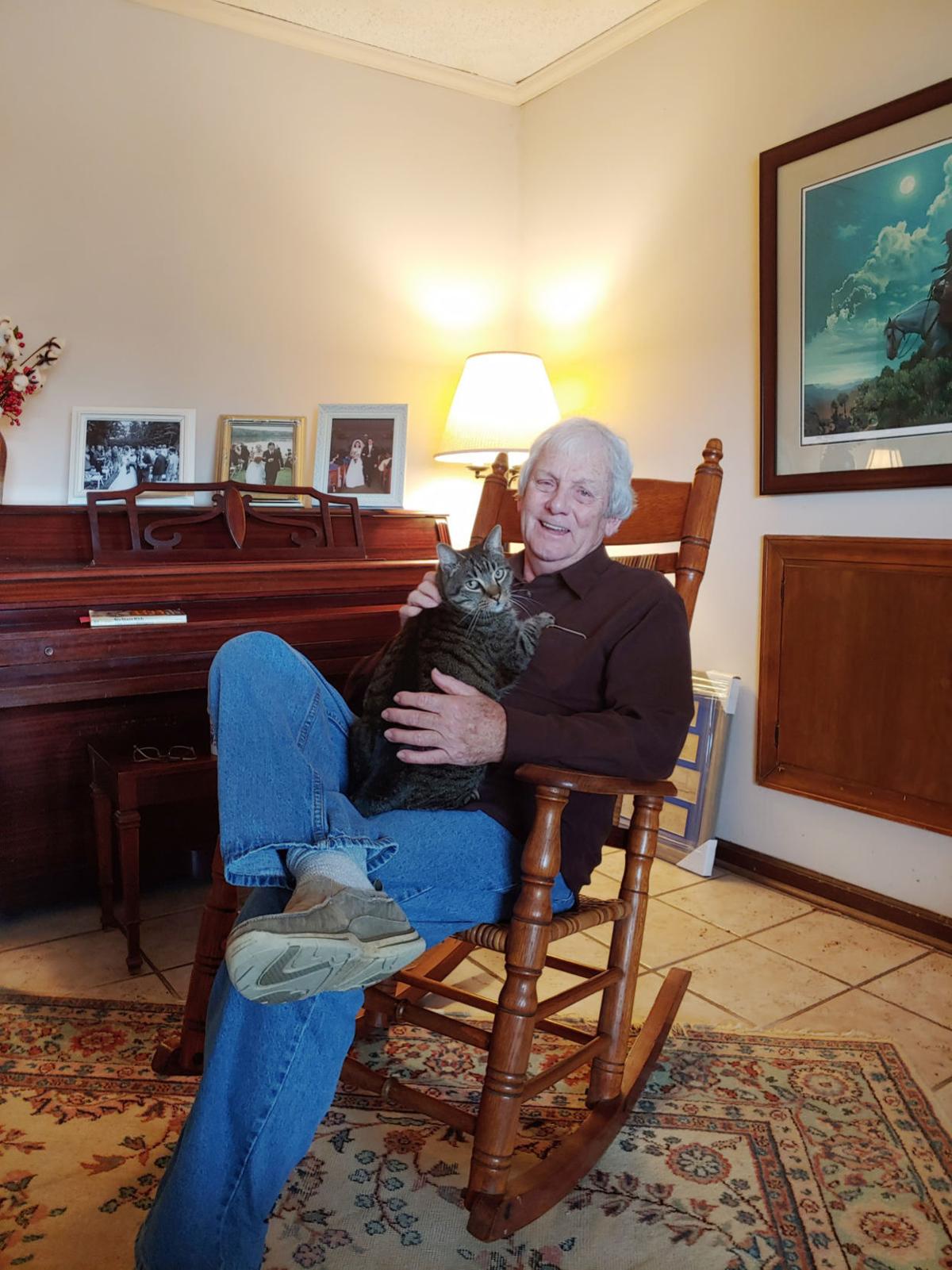 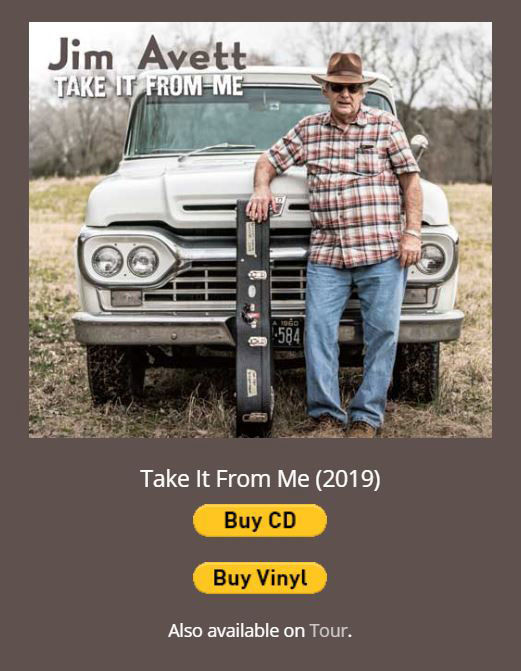 Sit down and talk with Jim Avett of Concord for a while, and you’ll come away having learned an awful lot. Then try to sit down and write up a newspaper piece about it, and you might end up scratching your head for a minute.

Things get kind of tangential, and the river of conversation doesn’t flow in a straight stream. It’s a meandering kind of thing.

First things first, though. Avett will be sharing his songs and storytelling at the Davis Theatre at Concord’s Historic Courthouse at 8 p.m. Jan. 31, in a concert that he performs annually. It always sells out, but you can still go to www.CabarrusArtsCouncil.org and say you tried.

But back to our story, on the top of Avett’s mind on an overcast January afternoon was this: He got carded for a beer in Knoxville, Tennessee, recently, and he’s still salty about it.

“I ordered a Coors Light for myself and a chardonnay for Susie,” (She’s his long-suffering wife and the butt of his Dad jokes,) “and this young man asked to see my ID. And I said, ‘Why?’”

The kid told him that was the policy of the establishment and the state law, but Avett wasn’t having it.

“I told that kid, ‘I’m not leaning up and pulling out my billfold for that. I’m just not going to be a part of that system.’”

“Any system that tells our young people that they can’t trust their own judgment.”

What will the world come to when there is no one left but people who can’t trust their own judgment, he asked.

There is likely a wide hole in this reporter’s notebook, but the next thing we come across is this statement: “Nothing runs efficiently anymore.”

And then we learn that Avett worked for himself for 40 years, running a company that built bridges over roadways. Specifically, the flooring in highway bridges.

He retired at 62, and he said he thought there’d be a party or some fuss about it, but the way it actually happened was he got up one morning and told Susie he wasn’t going to work anymore.

He enjoyed his work, and he knew every aspect of it. He’d worked every part of the job from the most rank element of it on up. “I think before you ask somebody else to do something, you need to know how to do it yourself.”

He talked about huge corporations that promise retirement benefits and shakes his head. “How do they even know they’re going to be in business that long? Look at Bethlehem Steel.” Or even closer to home, Cannon Mills, he said. Nope, not buying into that system.

Anyway, here’s the secret of life according to Jim Avett:

“God gives you two things when you’re born. One is a blank canvas, and you write on that canvas all your life. The other is a 50,000-piece puzzle, and the pieces are tiny.

“What you’ve got to do is put as many of those pieces together as you can.”

Avett said he hasn’t gotten as many of his puzzle pieces together as he’d like to yet, but at his age, it’s imperative for him to share the life lessons he’s learned, old and new. “Some of them I got right off the bat, and some of them I learned last week.”

And so, that’s what he does. He tours the country singing songs he’s written and songs of his predecessors, whose music he doesn’t want forgotten. He performs for small audiences in listening rooms, living room concerts, and venues like the Davis Theatre.

He won’t play bars anymore. The people get on his nerves. They’re there to see and be seen, not to listen to music and stories. And bars aren’t even bars anymore. They’re breweries. He’s not going to be part of that system, either.

And here’s another system he’s not going to be part of: digital music. He sells vinyl and CDs, and you can buy them at www.JimAvett.com, or at the merch table at his shows, or you can call him on the phone and he’ll mail it to you. But iTunes takes too much money from the artists it distributes.

Avett likes it old school. When country music got to be an investment commodity, that is, when monied entertainment types in New York and LA found that country music could make money, that pretty much put the nail in the coffin for the old-time art form, he said.

When those investors put their money in country music, they put their managers and marketers in with it, and it killed old-time country. Singer-songwriters like Roger Miller wouldn’t be able to make it if they were starting out today. Neither would Tom T. Hall, Waylon, Willie — he names several others.

Avett said he’d like to do an album of lesser-known cover songs from those old guys. Roger Miller would be one of the artists he’d include. “I think Roger Miller wrote 900 songs, and I don’t think he ever wrote a bad one.”

Meanwhile, his latest CD, “Take It From Me,” is made up of all original songs. On two of them, he co-wrote the lyrics with a friend, poet Steve Babin of Baton Rouge, Louisiana. The production is spare and includes some bass and fiddle by Patrick Crouch, and harmonies on several songs from his daughter, Bonnie Rini.

The album was originally made for his children and grandchildren, so there’d be a record of the songs Avett wrote himself. The kids liked it so much they encouraged him to go back to the studio and polish it up for release to the public.

He’ll play a selection of those at the Davis Theatre show — including a locally-inspired murder song.

What had happened was there was this man in Cabarrus County, whose name shall be withheld, and he was a scoundrel. He’d already left his wife and taken a mistress when he learned his girlfriend was cheating on him. He vowed to kill her lover, and he did, then he got caught.

To keep him from being dragged out of the jailhouse by a lynch mob — which had happened to another lowlife in Stanly County around that time — the authorities took him to Salisbury for his capital murder trial. He lost and was doomed to die, but he asked the judge to please let him go home and fix a roof he was working on at his house.

Inexplicably, the judge allowed it, the man went home, finished the roof repair, and then the sheriff’s deputies unceremoniously hanged him. There is some artistic license taken here in this retelling of the retold, thirdhand tale, because it went by pretty quick and branched into several tangents on its way to the notebook.

But anyway, the point is, they hung this bad man from a tree in eastern Cabarrus County, and let him sway around up there for a couple of days, then cut his body down and buried him right where he dropped. Then they piled a bunch of rocks on his grave.

Sometime later on, some kinfolk took a notion to slip him into a church cemetery, but the rocks stayed in that field, and eventually the man’s great-grandson worked and played in that field and on those rocks as a little boy. When the men would be plowing or working in the field and come across a rock, they’d have one of the boys take it and put it on that pile of stones that had come off the murderer’s grave.

And as a songwriter’s luck would have it, that great-grandson sold some land to Avett and told him about the pile of rocks, and the rocks were “a stone’s throw” from Avett’s current front porch. Even though they’d long since been scattered and paved over, it gave him something to ponder and noodle over, and out came a song called “Old Bones.”

Avett knows the man’s name. Knows his sons’ names and where they’re buried, and he knew the man’s great-grandson. But a singer-songwriter buddy gave him a piece of advice: If you name a murderer in a murder song, that murderer’s family will get really upset.

And now we get to the coda of this song about Jim Avett: That buddy that told him that about murder songs was one of Avett’s idols, Mr. Tom T. Hall.

He met Tom T. Hall through his sons, Scott and Seth Avett, founding members, along with Bob Crawford, of Concord’s pride and joy — international recording artists The Avett Brothers.

But this story isn’t about The Avett Brothers. It’s about Jim Avett and his upcoming concert at the Davis Theatre. Get your tickets today at www.CabarrusArtsCouncil.org. Find Avett’s CDs at www.JimAvett.com.

Beth McLaughlin is an artist and a freelance writer in Concord.