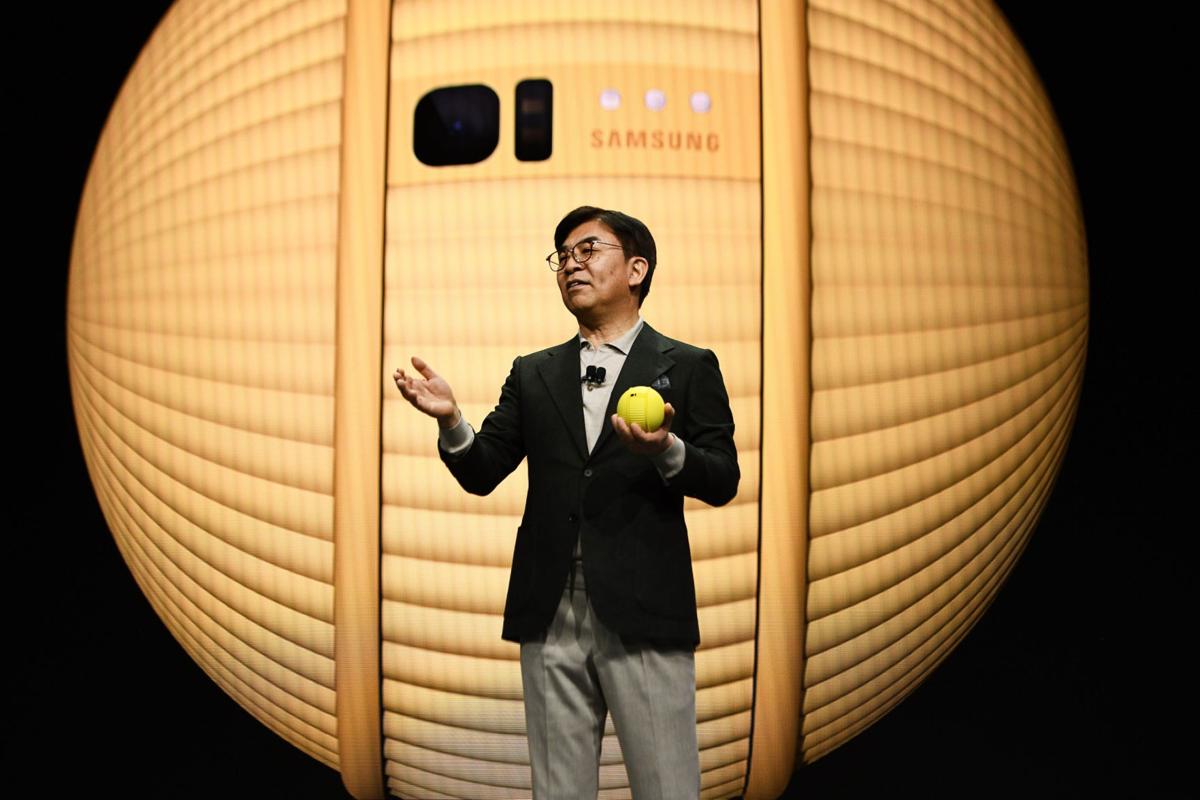 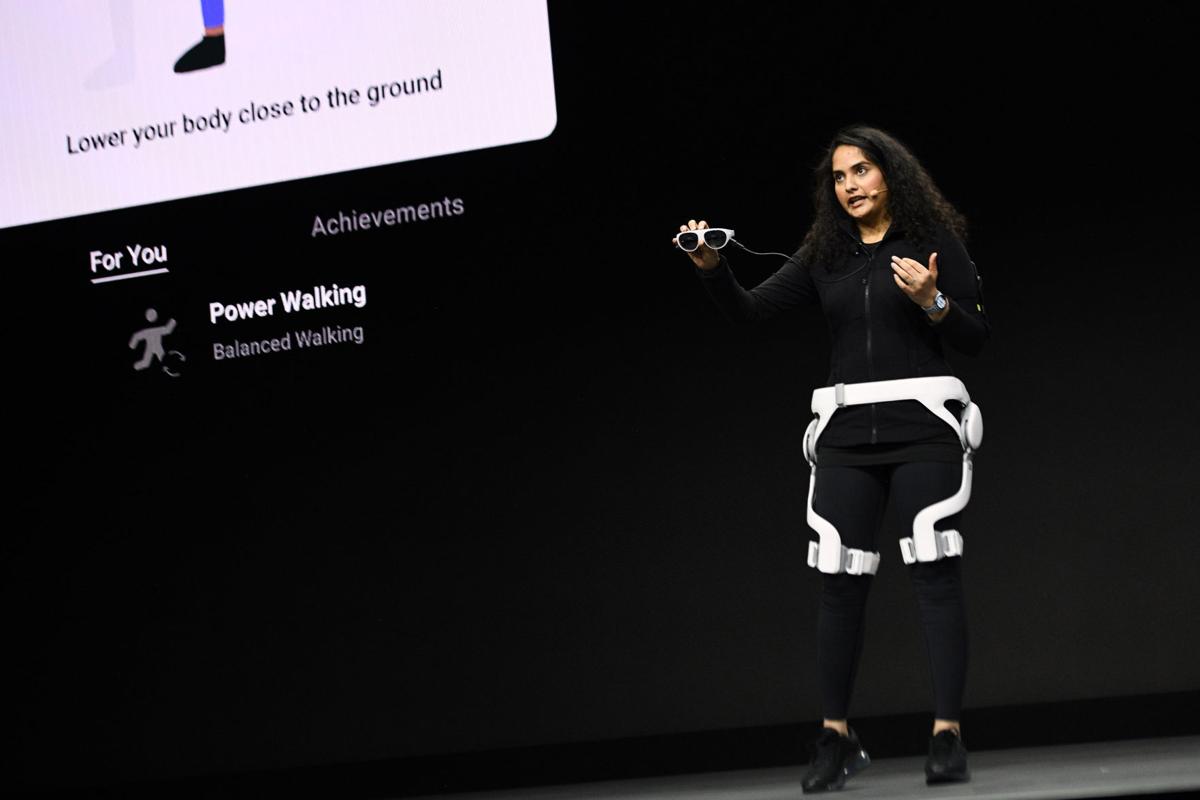 Samsung's GEMS is demonstrated onstage during CES 2020 in Las Vegas, Nev., on Jan. 6, 2020. MUST CREDIT: Bloomberg photo by Bridget Bennett 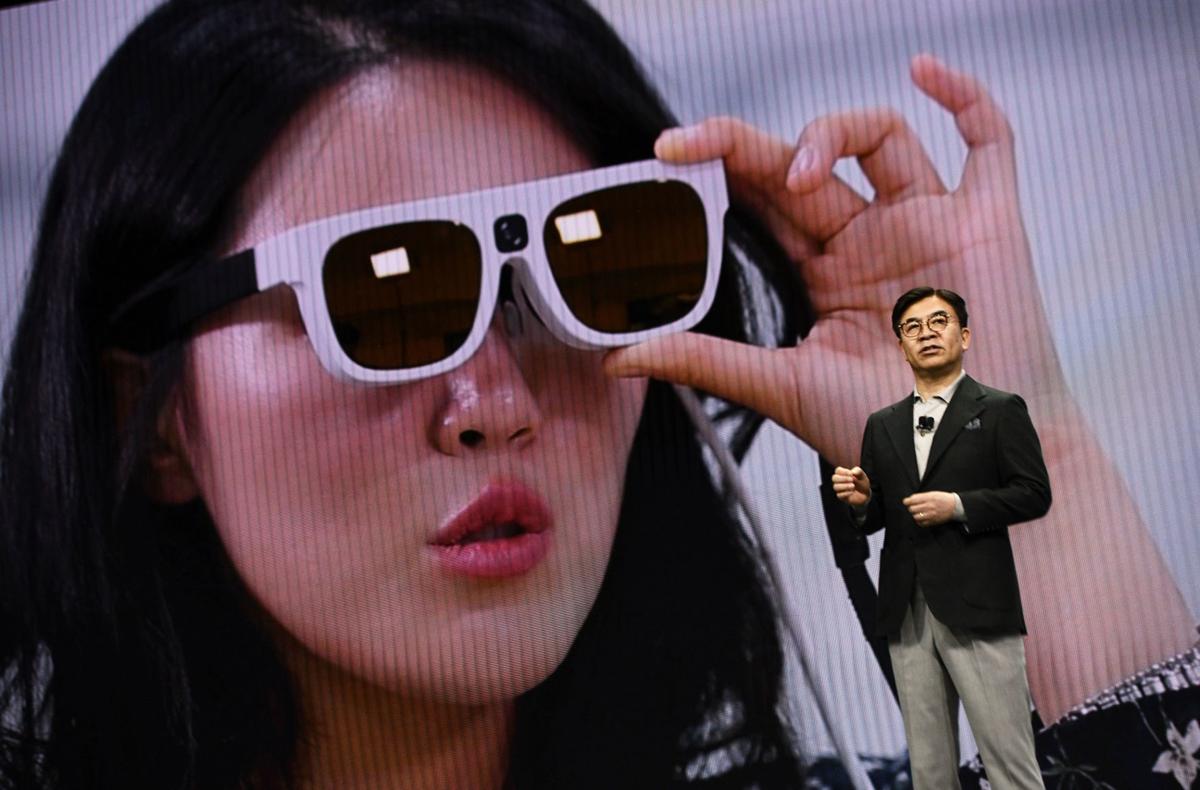 Samsung's GEMS is demonstrated onstage during CES 2020 in Las Vegas, Nev., on Jan. 6, 2020. MUST CREDIT: Bloomberg photo by Bridget Bennett

Samsung Electronics kicked off 2020 with an array of gadgets from prototype augmented-reality glasses to a new smart speaker that the company hopes will kickstart a fresh foray into the crowded smart home arena.

The world’s biggest home appliance maker set out its latest Internet of Things strategy, describing it as an “Age of Experience,” at the CES 2020 technology conference in Las Vegas. It will span everything from individual care to the connected home and smart cities in the next decade. At the heart of Samsung’s new smart home push will be the Galaxy Home Mini smart speaker, which the company plans to release in early 2020, said Hyunsuk Kim, chief executive officer of Samsung’s consumer electronics division.

“We need to rethink the space we have to accommodate our diverse and evolving lifestyles and generations,” said Kim during the opening CES keynote address. Along with artificial intelligence-driven concept products like the Ballie rolling bot, Samsung also showcased tech solutions for visually impaired and disabled people under the broad banner of technology enhancing people’s lives.

The Galaxy Home Mini comes years after Google’s Home and Amazon.com Inc.’s Echo smart speakers — and nearly 18 months after Samsung’s promised but never released Galaxy Home — but the Korean giant believes it can build a unique ecosystem around the Mini by making it the best controlling device for the home gadgets and appliances that bear its brand.

“Samsung will remain a hardware company, forever,” said Kim, who is testing the Galaxy Home Mini in his own abode, connecting it to 63 devices that include his curtains, lighting and third-party gadgets. Appliances linked to the Mini will be able to carry out orders such as scheduling when the dishwasher should run or making sure the washer’s rinse cycle is complete before the user gets home. “It’s not about when we release the product, but it’s more crucial how much further we can evolve the technology. No other speaker in the world can control gadgets as much as Samsung can.”

Amazon’s Alexa has a broad ecosystem of third-party Skills, which let you use Alexa to do things like control your Xbox, stream Apple Music, find your smartphone or play quizzes and other voice-based games. Samsung, which ships half a billion devices every year, lacks the same third-party support. However, it says it can muscle its way into the AI speaker market by virtue of its own product portfolio.

Like Amazon and Google’s home ecosystem ventures, Samsung sees the Mini acting as the hub connecting all its present and future AI-embedded hardware. That would encompass any devices connected through its SmartThings app as well as gadget rivals’ products linked via infrared hookups.

With plateauing smartphone and PC sales, voice-based computing is among the biggest growth opportunities remaining in the tech industry — and the home is where some of the earliest consumer adoption is happening. Forrester Research Inc. expects the market for smart home devices to expand 26% a year between 2018 and 2023. Samsung’s own home Internet of Things business grew 10-fold in 2019 from the previous year, mainly thanks to South Korea, the U.S. and Saudi Arabia, according to Sunggy Koo, head of the business at Samsung.

Wearable technology is another big area of focus for growth-starved companies, and Samsung’s latest effort is a teaser for its own AR glasses, seeking to succeed where Google Glass failed. The company is working to minimize dizziness, said Kim, which is the key to making the glasses as small as possible. Apple and Facebook Inc. are both working on AR glasses of their own, Bloomberg News has reported, and Microsoft Corp. offers the HoloLens headset.

The original Galaxy Home speaker that was announced in the middle of 2018 never materialized. Samsung has yet to make a final decision as to whether to sell the bigger smart speaker while it focuses on the more compact Mini. But it’s also working on peripheral gadgets in the interim, including the Ballie — a companion robot in the vein of Sony Corp.’s Aibo that rolls around like BB-8 in Star Wars. Kim expects both smart speakers and mobile robots will become major products in the consumer electronics market, offering a variety of services tailored to pet, child and elderly care.

“Eventually, I hope there is no interaction between humans and technology,” Samsung home IoT chief Koo said with respect to what the smart home may look like in 2030. Devices will anticipate people’s needs and offer services based on data collected from in-house appliances, he said. “At least within the boundary of smart homes, technology development will head toward touch-less and voice-less.”

One thing in Samsung’s favor in realizing that vision, Kim said, is a more hands-off approach to consumer data than internet-based rivals that have in past years hoovered up users’ personal information to improve their services. Facebook has earned criticism for this with its Portal teleconferencing cameras, as have Amazon and Google, each of which have exposed recordings of user interactions to human analyzers.

Kim said Samsung is putting an emphasis on safeguarding privacy by doing the necessary computations on the device itself — the so-called edge computing — removing the need for user information to ever leave the smart appliance or user’s home. Unlike advertising-reliant businesses like Facebook and Google, Samsung doesn’t need to build out intimately detailed user profiles to help it target ads. Consumers will get to choose whether to share data with the cloud to access additional services or just save data on their devices, Kim said.

“We will minimize data sharing. I mean, a hardware company like us is willing to do that,” said Kim, who also spearheads Samsung’s AI push. “We are a latecomer in the AI field, but we are catching up very fast.”

With assistance from Bloomberg’s Mark Gurman.