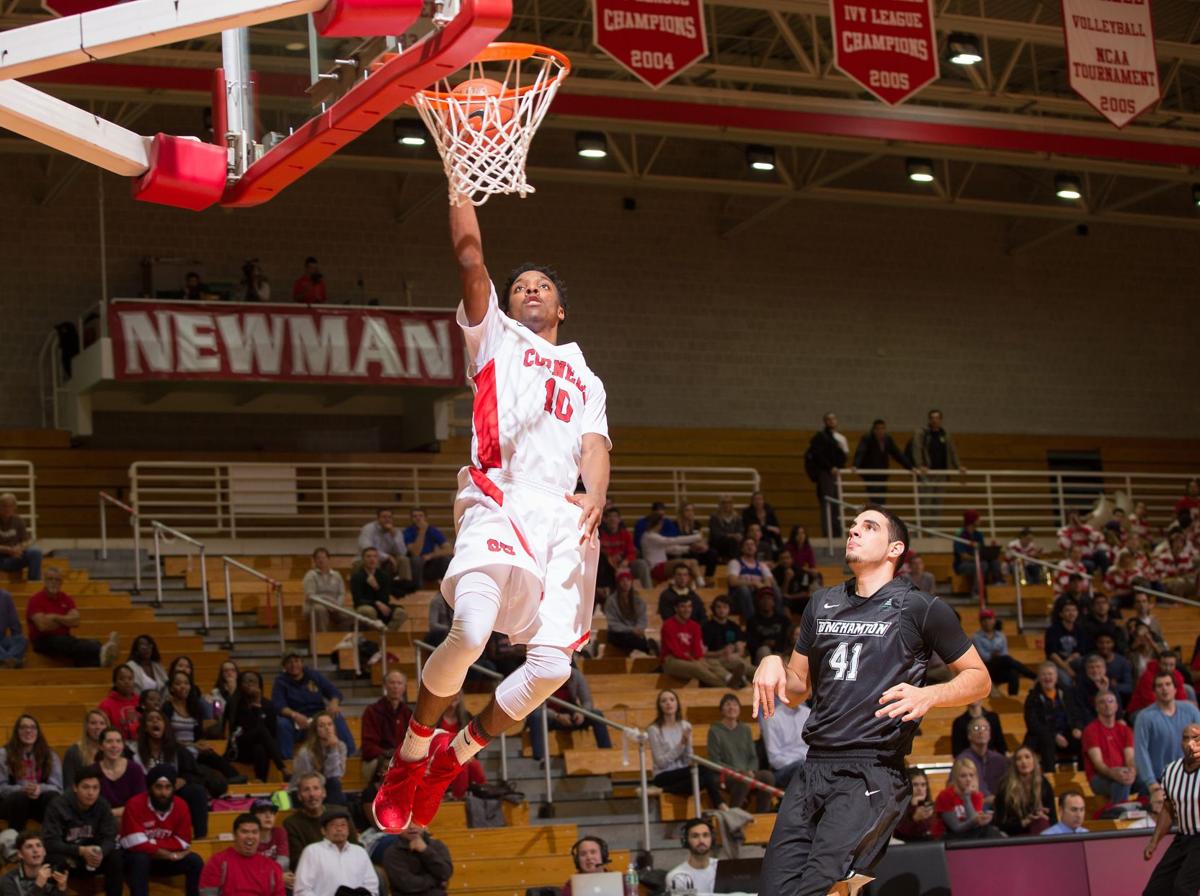 Former Cox Mill star Matt Morgan, now a sophomore guard at Cornell University, has declared for the NBA draft but has not hired an agent. 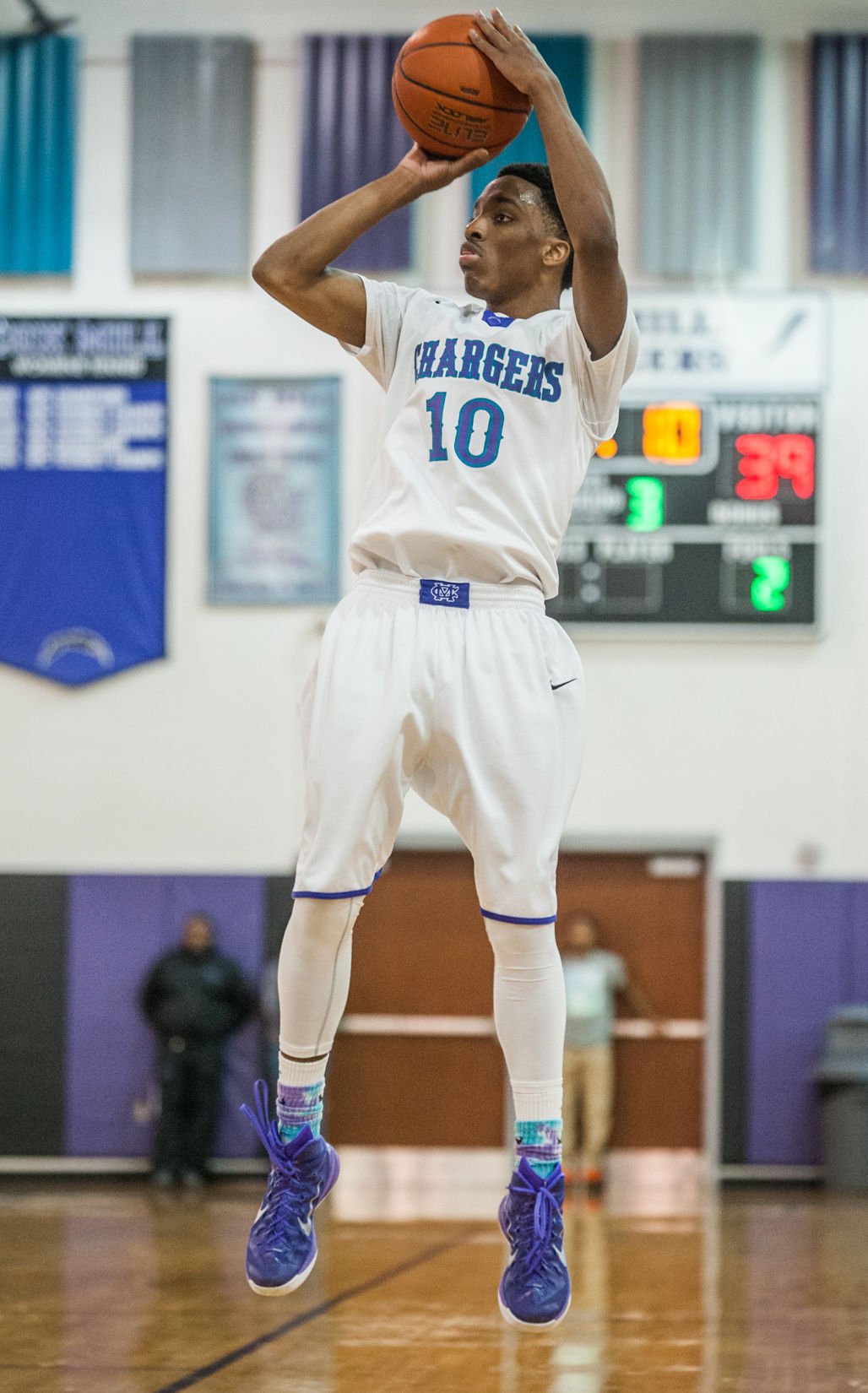 Matt Morgan, shooting a jumper during his senior year at Cox Mill

Former Cox Mill star Matt Morgan, now a sophomore guard at Cornell University, has declared for the NBA draft but has not hired an agent.

Matt Morgan, shooting a jumper during his senior year at Cox Mill

CONCORD, N.C. – Two short years ago, he was still traipsing the Cox Mill High School hallways, anxiously wondering what awaited him as he prepared for the two biggest challenges of his young life: handling the academic load at an Ivy League school and playing college basketball.

But as Matt Morgan left for Ithaca, New York, in the summer of 2015, he believed he could do special things once he got to the Cornell University campus.

And, well, it’s safe to say that he has.

After two star-studded seasons for the Big Red, Morgan has declared for early entry into the NBA Draft. The 6-foot-3 guard has not hired an agent, meaning he can return to Cornell with his two years of NCAA eligibility intact.

Morgan was expected to be in Chicago this week for the NBA Draft Combine. During the pre-draft process, Morgan will be able to interview and go through workouts with NBA teams, and a handful of organizations – the Golden State Warriors, Minnesota Timberwolves and Washington Wizards -- already reached out to him.

Getting the opportunity to receive feedback from NBA personnel was the primary reason Morgan decided to declare early entry for the draft.

“Most of my numbers were improved from my freshman year, so I just decided to put my name out there just to see if I get any calls back and just to see what I need to work on to play at the next level,” Morgan said during a phone interview with the Independent Tribune.

Morgan said he weighed his options for a long time before settling on his decision. But after talking with his parents, Lamont and Paris, along with Cornell coach Brian Earl, Morgan said he felt comfortable taking the step.

“It was his decision,” Lamont Morgan said. “At first, I kind of didn’t agree with him. But after speaking with him, it made sense to me. Ultimately, he wants to be at that (NBA) level, so he’s not penalized for coming out and putting his name in the draft to kind of get an evaluation on what it would take for him to get to that point.

Matt Morgan isn’t taking any chances. After making his announcement on April 23, Morgan worked tirelessly. He’d spend mornings in the classroom before heading off for some weightlifting. On most days by 3 p.m., he’d be on the court, either playing games with his teammates or working on solo drills to refine other aspects of his game.

“So far, it’s been really exciting,” Morgan said. “I’ve just got to keep staying with the process of getting better.”

Getting better is a process with which Morgan is very familiar.

Morgan wasn’t necessarily a hoops prodigy growing up in Concord; he had to work his way to being an upper-echelon player.

He grew up in a family that loved basketball. His father played under the legendary John Thompson Jr. at Georgetown University, where he won a Big East title when the league regularly rivaled the ACC as being the best college conference in America. As Lamont continued to play when Matt was a child, the boy used to tag along to watch. When he got older, Matt took on some of his dad’s friends, showing great promise.

But Lamont still didn’t really know how good his son was – or more important, how serious he was about being good.

“I kind of figured it out his junior year of high school,” Lamont said. “His body started developing a little bit, he became more athletic, and it worked in his favor. I mean, he could always shoot the ball from a very young age, but then he learned how to get to the rim, how to draw fouls and make free throws. I saw his game rounding out to a complete game.

“Around that time, I no longer had to wake him up in the mornings,” Lamont added. “He was already up and gone and going to the gym to do something, be it to lift weights or shoot free throws or just play. He became a gym rat. He had his own way to get around and everything; his friends would come and get him, and they would go to the gym on their own. That’s when I knew he really loved the game and not just liked it.”

In his senior season at Cox Mill, Morgan was named the South Piedmont 3A Conference Player of the Year and finished as the Chargers’ all-time leading scorer with more than 1,600 points. Also that year, he was named the Independent Tribune’s Co-Player of the Year, along with former Hickory Ridge star Jaylen Stowe.

Still, interest from most of North Carolina’s Division I colleges was scarce. That baffled Cox Mill coach Jody Barbee, who regularly made a point to say just what state college coaches were missing out on by not recruiting Morgan.

After only a handful of offers, mostly from mid-major programs, Morgan chose Cornell, largely because of the superior education he knew he would get.

Morgan was a sensation from the moment he donned a Big Red uniform.

In his first college game, Morgan dropped 20 points on Georgia Tech. He stayed hot his entire rookie season, as he led Cornell – and the Ivy League – in scoring with 18.9 points per game. Only four Division I freshmen had a higher scoring average, and he ranked 54th among all players nationally. It all resulted in second-team all-Ivy League honors.

Some considered Morgan the best player in the Ivy League even at that point. And when Bill Courtney was fired as Cornell’s coach shortly after the season, other colleges showed interest in Morgan. Two major programs, N.C. State and Providence, even reached out to Morgan’s family about possibly getting him as a transfer.

But when Cornell hired former Princeton standout Brian Earl as head coach, it made a difference to Morgan. Especially since he was asked to be one of the members on a committee charged with selecting the new coach.

“I think ultimately, when Cornell gave me the chance to sit in on interviewing the coaches and we got to talk to Coach Earl about how he wanted to play, I think that just made me stay here because I was really excited to play in a system like that,” Morgan said.

Morgan didn’t miss a beat under Earl, who allowed him to play more off the ball, loft 3-pointers and create scoring opportunities off backdoor cuts. In his sophomore campaign, Morgan’s 18.1 points per outing again was tops in the league. Even more impressive, he became the only Cornell player ever to score 1,000 career points by his sophomore season.

When the season ended, Morgan said he began having thoughts about the NBA draft process.

“Me and my dad had kind of gone back and forth: ‘Should I do it? What would it take to be able to do it?’” Morgan said. “We stayed in constant contact about it. One day, he told me just to think about it. I went to sleep on it, I prayed on it, of course. I woke up the next morning and called him and said, ‘I think I actually want to do it.’”

In the immediate days following his announcement, there wasn’t much going on for Morgan, although that was expected to change this week with the NBA Draft Combine taking place.

In the weeks leading up to the pro-draft festivities, though, he simply spent time working on his game. Occasionally, he has gotten back home to Concord to work out with Barbee and the Chargers’ lead trainer Nick Trull.

During a recent session on the Cox Mill campus, Morgan was scrimmage with a group that included rising junior stars Wendell Moore Jr. and Caleb Stone-Carrawell. Also in the gym were coaches from Duke, Wake Forest and Marquette, in town to see some of the current Chargers.

Morgan, of course, was scintillating.

“He was just flat out stroking it,” Barbee said. ”He was putting on a show. I kind of stuck my head in between all three of (the college coaches) and said, ‘Y’all let this dude get out of the state of North Carolina and get to Cornell.’ They all just started chuckling and said, ‘Yeah, he can shoot the basketball.’”

“He’s got unlimited range shooting the basketball,” Barbee marveled. “He can take a few steps across halfcourt and shoot it like it’s nothing. He’s just gotten better. He’s stronger, his body’s more mature now. Kind of like here, he’s been given the keys to the car, and he’s just made the most of it.”

Morgan admits to being a little nervous about the pre-draft process. But he said the excitement outweighs everything as he prepare to prove his wares against some of the biggest names from some from the biggest programs college basketball has to offer.

“But I think it’s beneficial because, if you don’t sign with an agent, you can just go right back to school and keep working and get better next season.”

The deadline for players to declare their intention to remain in the draft is May 24.

What will Morgan ultimately do? Has he decided to return to Cornell, no matter how well he plays? What if an NBA team tells him it will draft him at a certain spot? Is he gone?

“I’m always open,” Morgan said. “You never know in situations like this. I mean, if something were to happen, of course, I would talk to my coaches first to see what they think, and, of course, my family. My dad played at a high level, so he would have some pretty big input. My coach was really good in his years at Princeton, so he would have some input. But when it comes to what I would do in certain situations, I’m open to anything, any answers and any advice from anyone I could get it from.

“If something were to happen where a team is like, ‘Hey, we’ll take you here (in the draft),’ I’d have to talk to my coaches about it. But I’m pretty much doing it just to put my name out there and see if I can get some evaluations and come back to school and work on those things.”

CONCORD – If everything goes as planned, Matt Morgan said goodbye to Cornell University on Friday.

CONCORD – Thursday night was pretty quiet for Matt Morgan as he hung around his Cabarrus County home with his family.