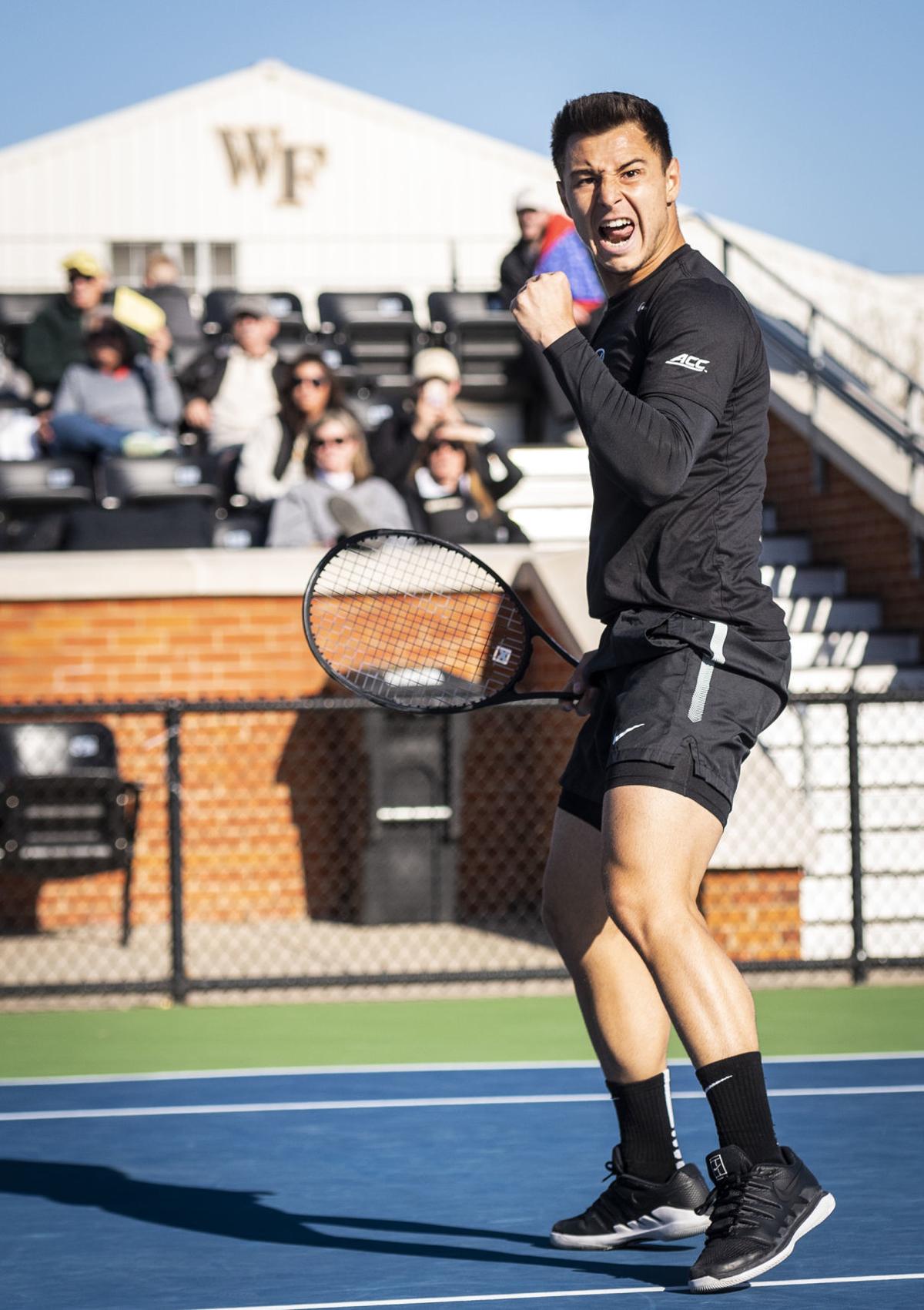 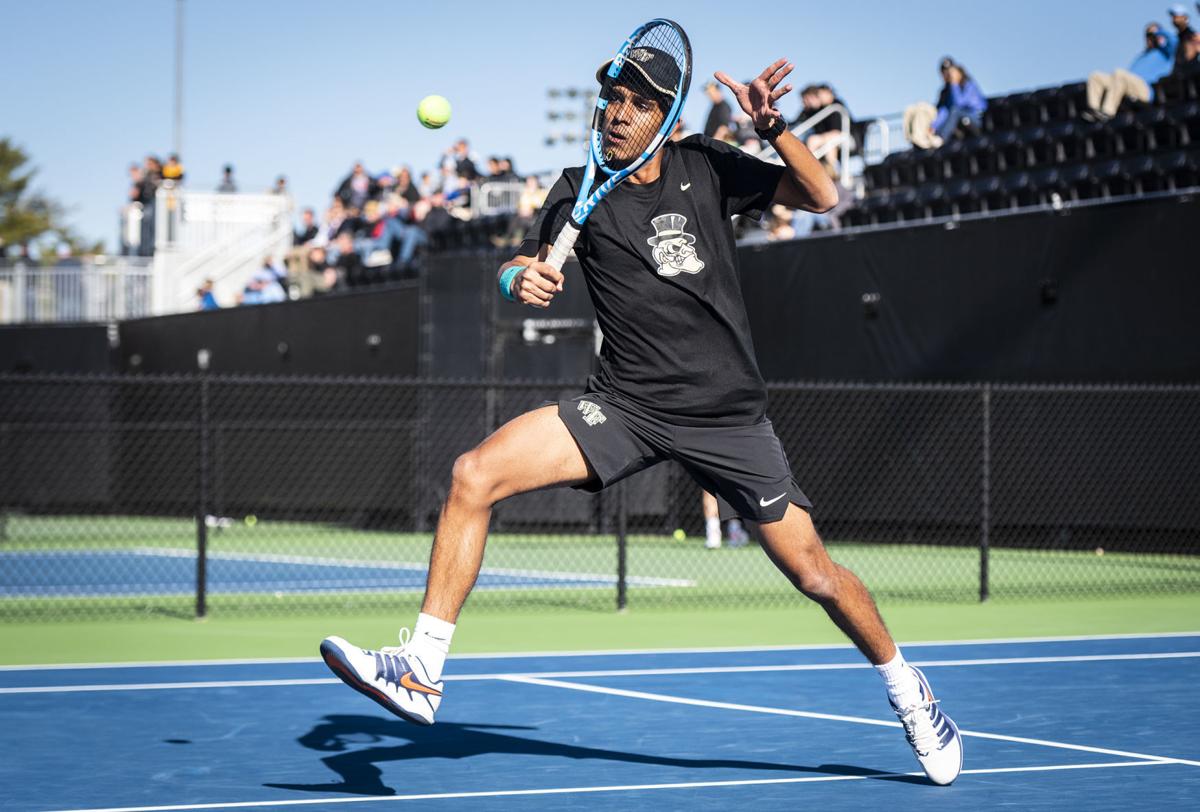 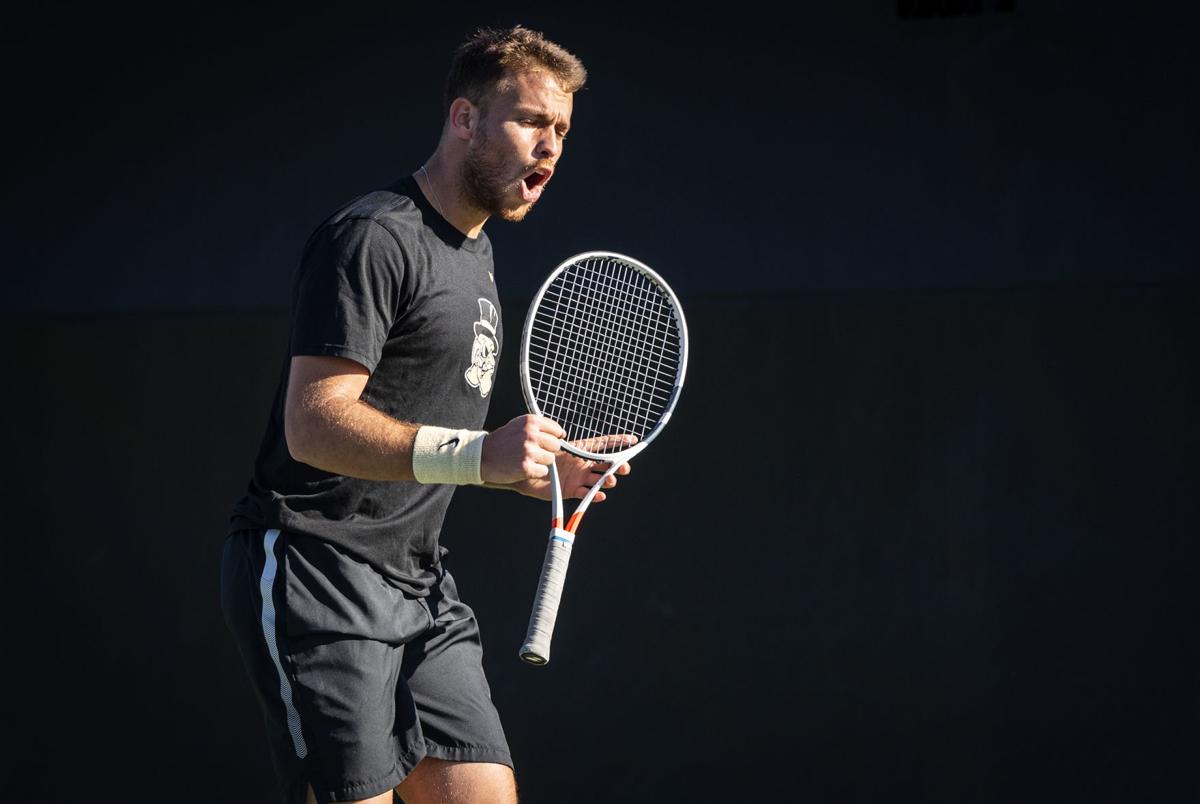 The third-ranked Wake Forest men’s tennis team started slowly, but it finished as bright as the late March sun that hung above the Wake Forest Tennis Complex on Wednesday afternoon as the Deacons came from behind to steamroll past No. 11 North Carolina 5-2 in an ACC match.

The Tar Heels took a 2-0 lead after winning the doubles point and winning at No. 6 singles when Mac Kiger of North Carolina upended freshman Siddhant Banthia 6-4, 6-2. But the Deacons (22-3, 8-0), the defending NCAA national champions who also defeated the Tar Heels 4-2 on Feb. 17 in the semifinals of the ITA National Team Indoor Championship in Chicago, dominated the rest of the match, winning the last five singles matches.

“They (North Carolina) got off to a great start,” said Coach Tony Bresky of Wake Forest. “I didn’t see much of 6 singles. From what I talked to Chris (Eaton), my assistant, it was kind of a learning curve for our freshman there, who’s a very good player and maybe didn’t play his best today. But the rest of the guys fought hard and it was some really strong performances from our singles guys.”

“Credit to Wake, they played a great match,” said Coach Sam Paul of North Carolina. “It was close all the way though, so they came through in some big points. They just outplayed us.”

Junior Borna Gojo lost to Chrysochos in the singles national championship at the Wake Forest Tennis Complex last year. Gojo played No. 1 singles for the Deacons on Wednesday and struggled early against William Blumberg. Blumberg won the first set 6-2, but Gojo won the next two sets 6-3, 6-3 to win the match and gave the Deacons a 3-2 overall lead.

“We felt good. We felt ready to go,” Gojo said. “Maybe me personally I just went out kind of flat out there today. I don’t know why I wasn’t feeling it. I’m tired a little bit, also. So might’ve been the reason, but it’s not about the first set or into the second. It’s about who wins the match.”

After Gojo finished his match to give Wake Forest a lead, he had a chance to watch sophomore Bar Botzer, who was playing No. 3 singles against Brian Cernoch on the court next to Gojo. Cernoch won the first set 6-4, but Botzer won the second set 6-4. Botzer controlled much of the third set and led 4-1 and 5-2.

“Just watching around, getting that energy from me, and Botzer coming back kind of the same time,” Gojo said. “Switching the match around it gives you more confidence. You know you have a guy next to you who’s fighting also and giving you energy. It’s really fun.”

Botzer had a chance to break Cernoch at 5-2 in the third to clinch the match, but Cernoch fought from down 15-40 to win the game to make it 5-3.

“The conditions were a little bit tough for me today,” Botzer said. “I’m also kind of a little bit tired. But at the end I kind of started to lock in. I was not playing my best tennis, but for sure I was competing well and getting the job done.”

Bresky had a bird’s-eye view of Botzer’s match as Botzer was trying to clinch the match for the Deacons.

“Bar, he’s about as clutch as they come,” Bresky said. “You can see at the end there once we kind of talked about it after the first set after he lost the first set. Bar and I have a really good relationship and kind of, ‘Hey, it’s a pretty good chance it’s going to come down to you.’ looking at the scoreboards. It’s early to say that, but I like putting the pressure on him because he handles it so well.”

And handle the final game well, he did. Botzer had four straight service wins to close out his match and the overall match to give the Deacons a 4-2 lead.

“I was a little bit nervous and I didn’t feel so well with the back, so I kind of told myself I was going to put a little bit more on my serve,” Botzer said. “I had full control of that, so I at least tried to serve a little bit bigger. So I started the point controlling it. I did pretty well the last game.”

Even though the match was clinched, they finished out No. 4 singles and freshman Melios Efstathiou of the Deacons defeated Blaine Boyden 7-6, 3-6, 6-4.

“They’ve got a lot of experience and they played a good match,” Paul said. “I think the second sets sort of turned the momentum a little bit.”

Wake Forest leads Miami (15-5, 6-1) by a half-game in the ACC regular-season race with four matches left. The Deacons play at Georgia Tech on Friday and at Clemson on Sunday.

The Deacons finish with home matches against Florida State on April 12 and Miami on April 14 before the ACC Tournament.

“There’s a lot of great teams in the ACC and you just kind of have to go one by one,” Bresky said. “Every much kind of presents its own challenge, and playing on the road is always tough. And so we’ve got two more matches on the road this weekend.”