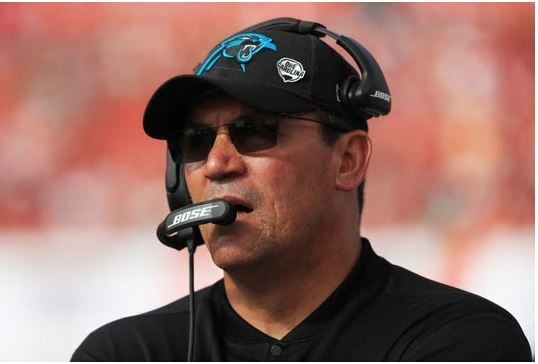 Ron Rivera was fired from the Carolina Panthers last month and was named the head coach in Washington on Tuesday.

Ron Rivera isn't a sexy hire, and I mean that in a most complimentary way.

He isn't Mike Shanahan, a head coach who brought a championship pedigree from somewhere else. He isn't Joe Gibbs, who came back toting three rings and trying to restore a legacy he created. He doesn't have the last name of Jay Gruden, and he doesn't come with flashy offensive credentials. He offers no promise to modernize the Washington Redskins' style of football.

Rivera is just a traditional, hard-nosed ball coach. He is a leader and a communicator. He is a stable, reasonable, decent human being who, at 57, will guide the football team with impeccable character and class and foster an environment of synergy.

Oh, and another vital thing: The days of a soft, defensively inept product are about to end. If you've been praying for Washington to return to its tough and stingy roots, Rivera's defensive emphasis and prowess give the Redskins their best chance in decades at sustaining excellence in this area.

Sexy hire? No. Smart? Infinitely. By turning to Rivera, owner Daniel Snyder has made a substantive decision that, with patience, has a better chance of stabilizing the franchise than any move Snyder has made over the past two decades. It's not because the former Carolina Panthers coach is some great, unassailable savior; he has flaws and needs to evolve. It's because the owner read the franchise's pitiful situation properly and acted decisively in identifying the type of coach capable of taking command and fixing the most pressing issues.

You know the dozens of ways that this could fail, especially if egos get in the way and Rivera receives too much interference. Those are boilerplate concerns with this organization, but there should be hope because Snyder didn't make some strange, luxury pick. Rivera is just a pickup truck - a nice one, but still a pickup truck - and you bring him to do practical things. Earn respect. Restore discipline and order. Develop good players and good people. Build a competitive team that won't shrink or disappear on game day. Washington's needs match Rivera's strengths. If you're going to hire a coach before finalizing new front-office personnel and structure, Rivera can be considered a good foundational piece.

In fact, Snyder should give Rivera as much organizational power as the coach can handle, even if that includes final say on personnel. Ordinarily, I would consider that a dangerous level of authority, but when you do some digging on Rivera's background, you come back feeling the same way you do about his coaching: He's just a solid, well-intentioned dude. He will work well with others. He has underrated scouting instincts, but he also recognizes that he cannot succeed alone and must resist micromanagement. His most admirable trait is that he genuinely cares about the people he works with, from ownership down, and he gets to know them to maximize their talents.

If Snyder wants to pair Rivera and Eric Schaffer, the team's senior vice president of football operations, atop the organization, it could work with Rivera being the "football guy who wins a coin flip" and Schaffer being the big-picture executive. If Snyder wants to bring in a team president from the outside to replace Bruce Allen, it could work as long as Rivera is involved in the hiring process.

The Redskins also should consider Rivera's connections. He worked well with Buffalo Bills General Manager Brandon Beane, who was a critical part of the Panthers' success before receiving the top job in Buffalo. It's worth considering whether Beane could be poached.

More realistically, former Carolina linebacker Dan Morgan is the Bills' director of player personnel and seems ready for a promotion. Morgan never worked directly with Rivera, but he is sort of a Beane protege who came up through the Seattle Seahawks' personnel department during their run of Super Bowls and sustained success. Rivera is known to be a fan of Morgan's; they have similar philosophies about football players. In addition, because Morgan worked under Seattle General Manager John Schneider, he has insight into how an organizational structure with shared coach/GM power can work. Schneider and Pete Carroll didn't know each other, but they have combined to produce the most successful decade in Seahawks history.

In Carolina, Rivera worked well with general managers Marty Hurney and Dave Gettleman. During two runs with Hurney, Rivera has had significant influence on personnel decisions. The coach pushed hard for two of the franchise's biggest decisions: drafting Cam Newton No. 1 in 2011 and selecting Christian McCaffrey with the eighth pick in 2017.

This doesn't mean Rivera is some kind of undervalued version of Bill Walsh who is about to do big things in Washington. But it does underscore that the Redskins are hiring an earnest worker who is more than a glorified defensive coordinator. In general, he hires good assistant coaches and has a solid coaching tree, including former Arizona coach Steve Wilks and current Buffalo coach Sean McDermott. In Newton, Rivera has experience in leading the development of a quarterback from prospect to star, which is Washington's priority with Dwayne Haskins. When controversies arise, he handles them with professionalism and a steady voice, and you know that skill always comes in handy at Redskins Park.

There are concerns, of course. With a 76-63-1 record over nine seasons, Rivera became the Panthers' winningest coach, and he led the franchise to three division titles and four playoff appearances. But his record is a bit deceiving because Carolina had a winning record in just three of those seasons. The Panthers went 12-4 in 2012, 15-1 during their 2015 Super Bowl season and 11-5 in 2017. Beyond that, they were a six- or seven-win team most of the time. You have to remember that Newton needed time to develop during Rivera's early years, and the quarterback was often unavailable or grinding through injuries during some of those losing seasons.

Still, Rivera left a good number of wins on the table in Carolina. His teams need to be more consistent. There is ample room for his offense to be more dynamic, even though he prefers a physical, defensive-minded team. He needs to prove he can take a team to the top and keep it there.

Snyder needs to give Rivera two things: patience and resources. And that doesn't necessarily mean spending big money on a high-profile player or two. It means spending big money, even if what you are buying has little obvious potential to sell merchandise and put fannies in FedEx Field seats. Snyder needs to invest in a robust front office and the very best coaching staff. He needs to revamp the training staff. He needs to upgrade the practice facility. Be flashy in those areas, then let Rivera do his thing.

I don't have to detail all the ways another promising hire can fail. You already know where the craters exist. But the Rivera hire feels different because it doesn't feel as though the owner was trying to win a news conference. He was in a rush to hire a good coach this time. Snyder went for a dependable model, one with substance and the best fit. By far, it was more impressive than anything else he could have done.