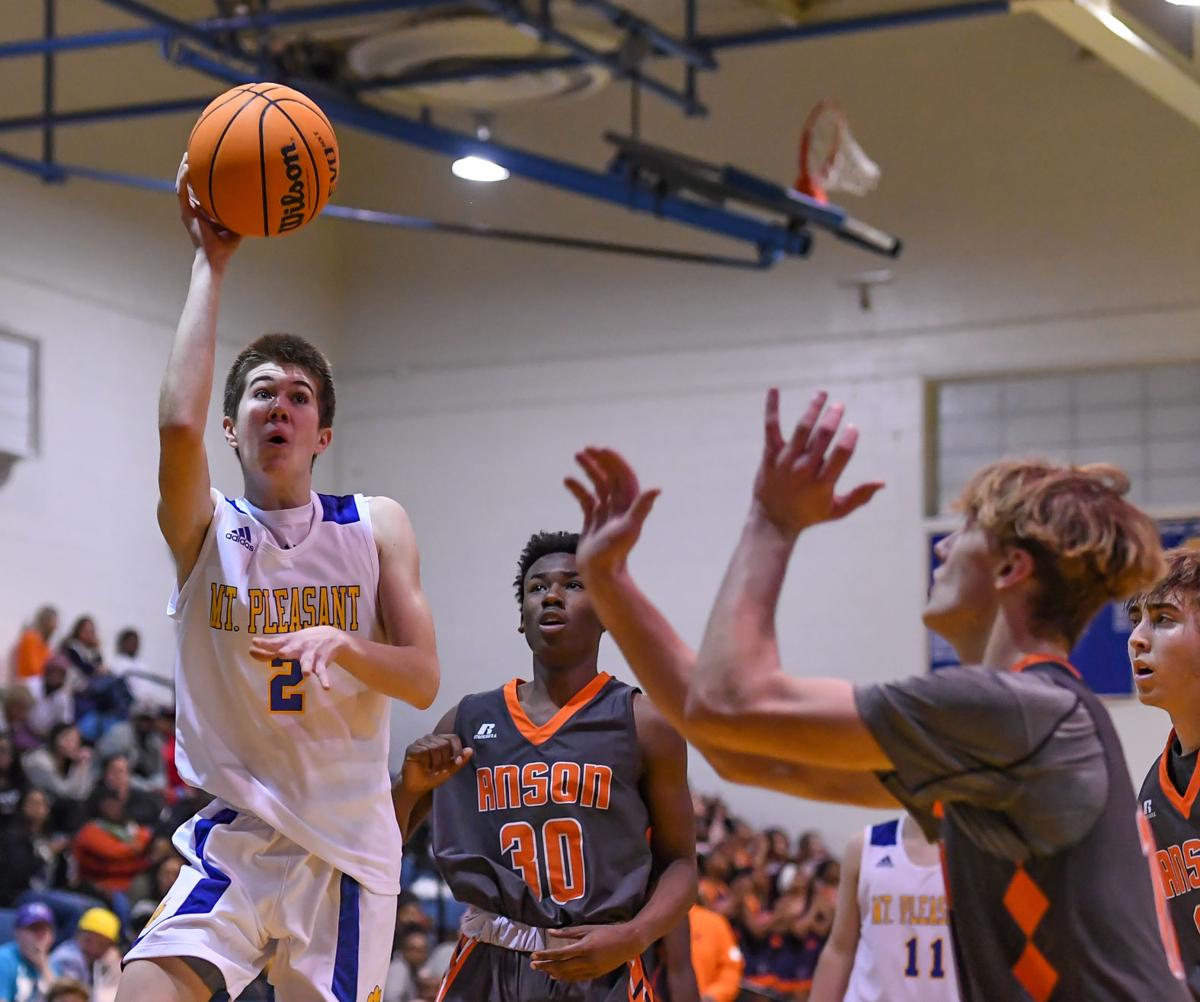 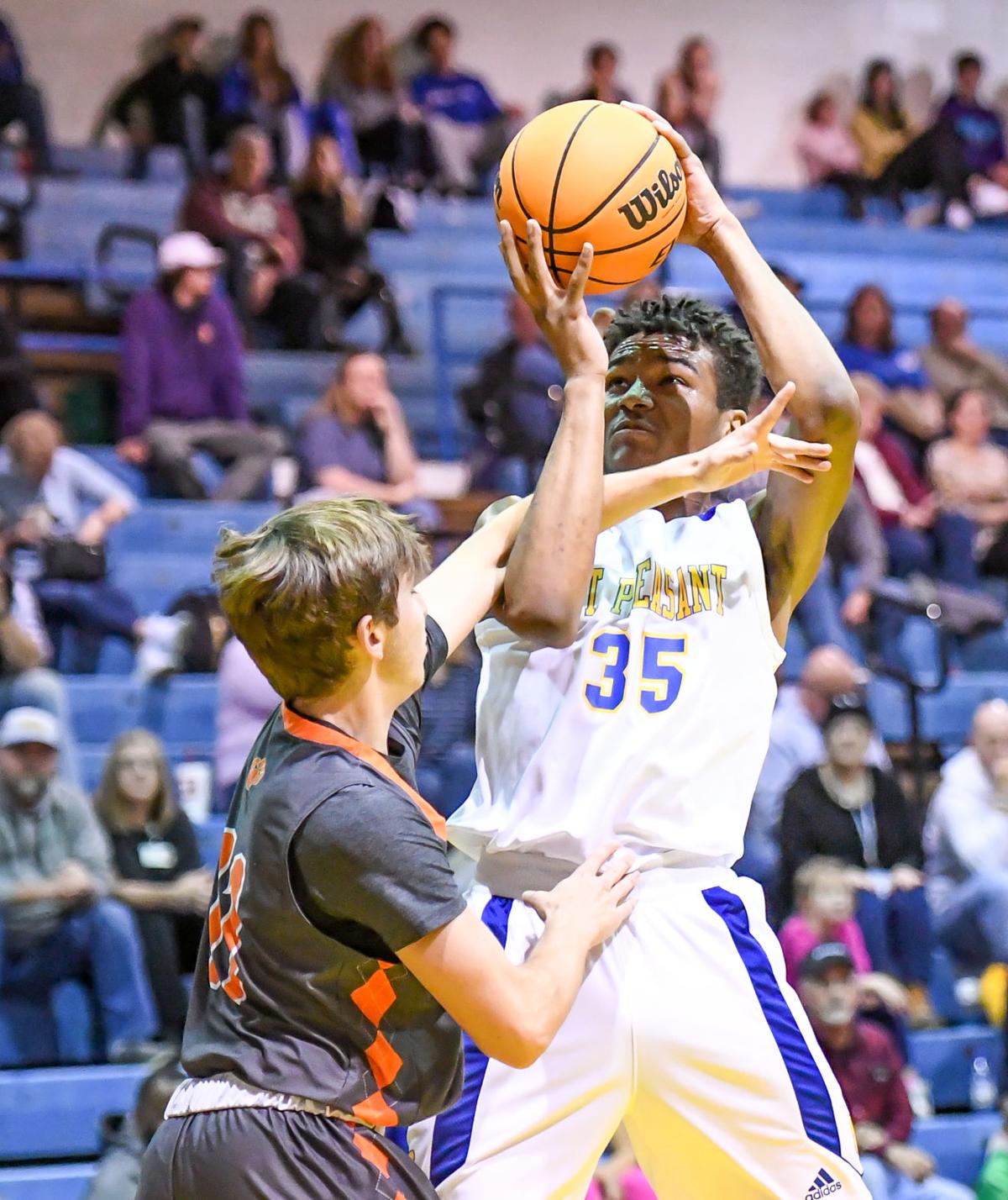 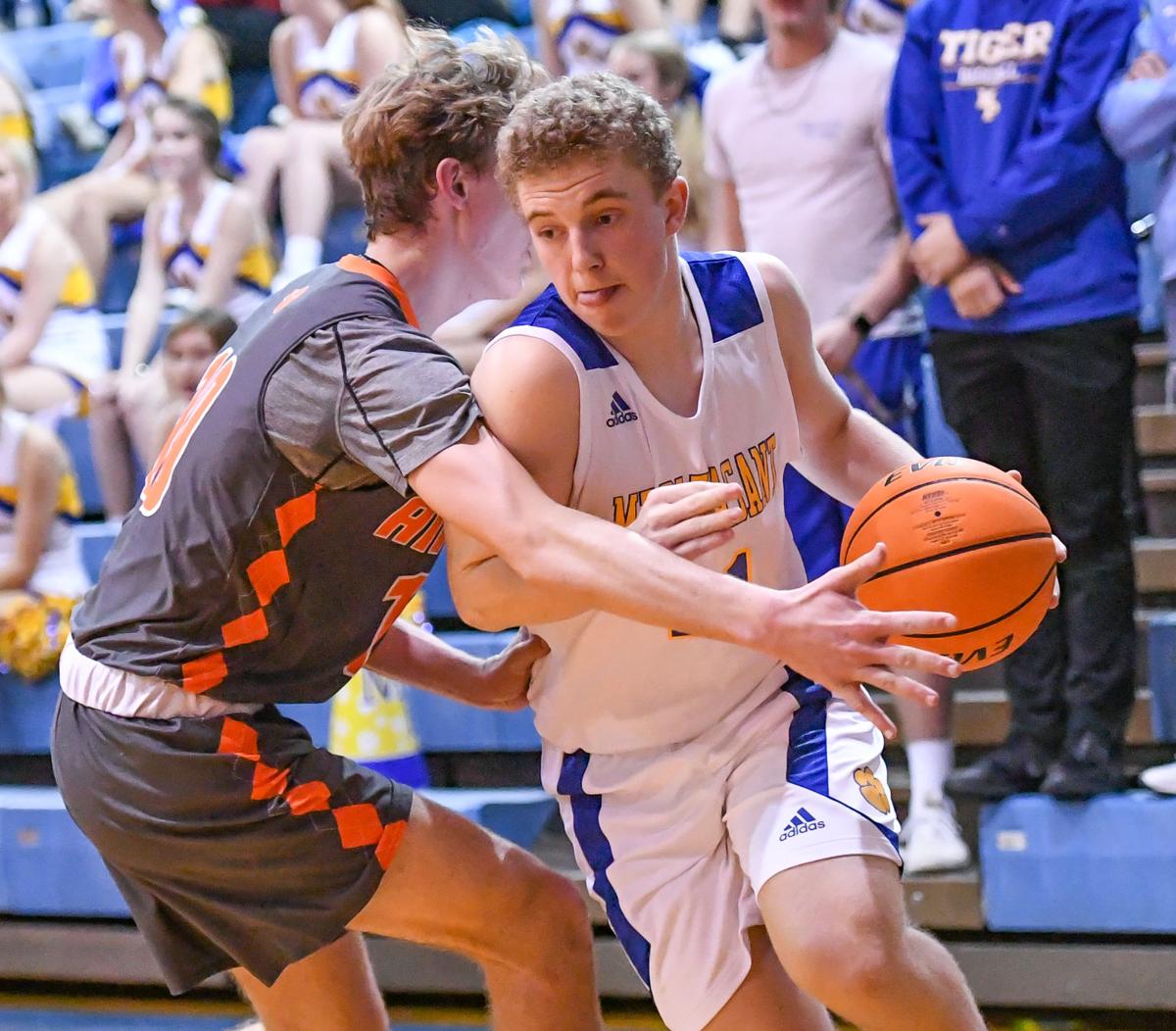 Jack Pruitt(11) gets around the Anson defender. 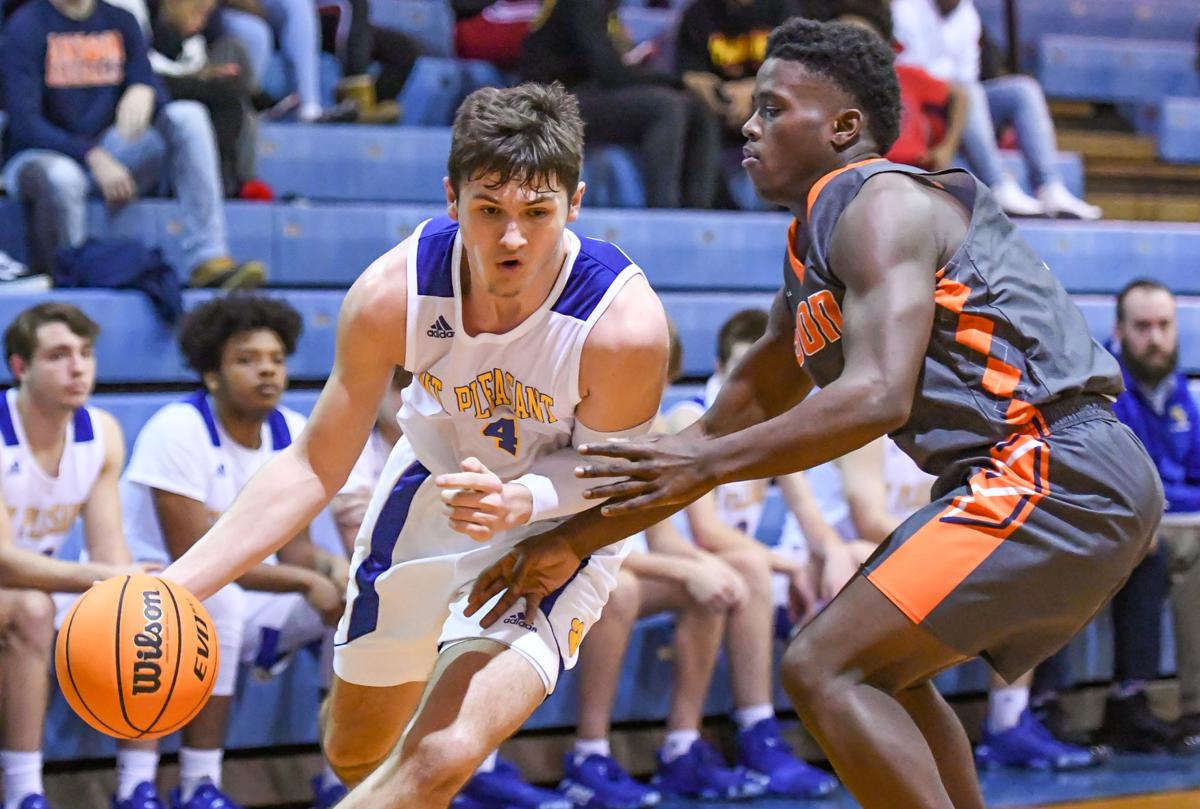 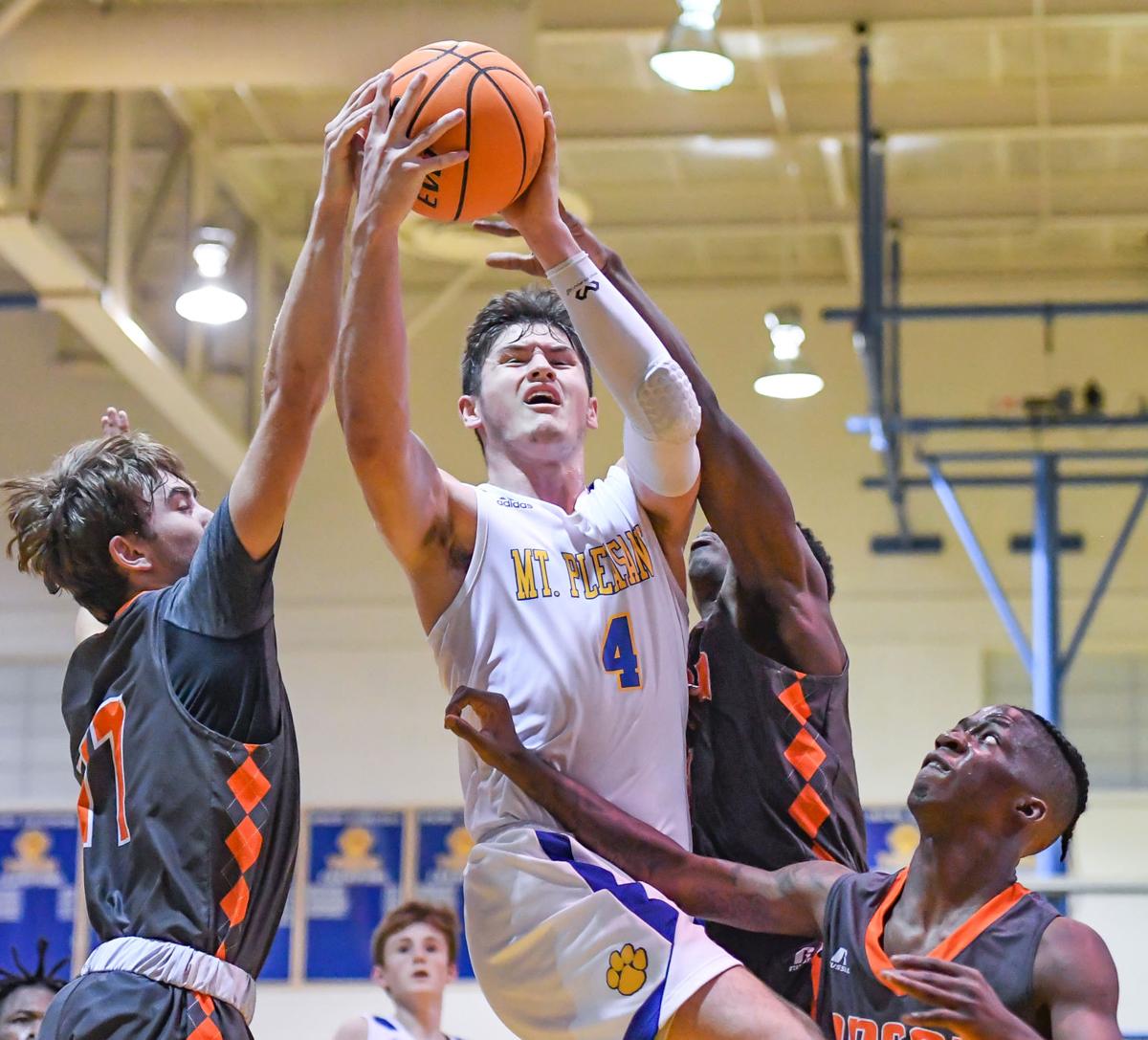 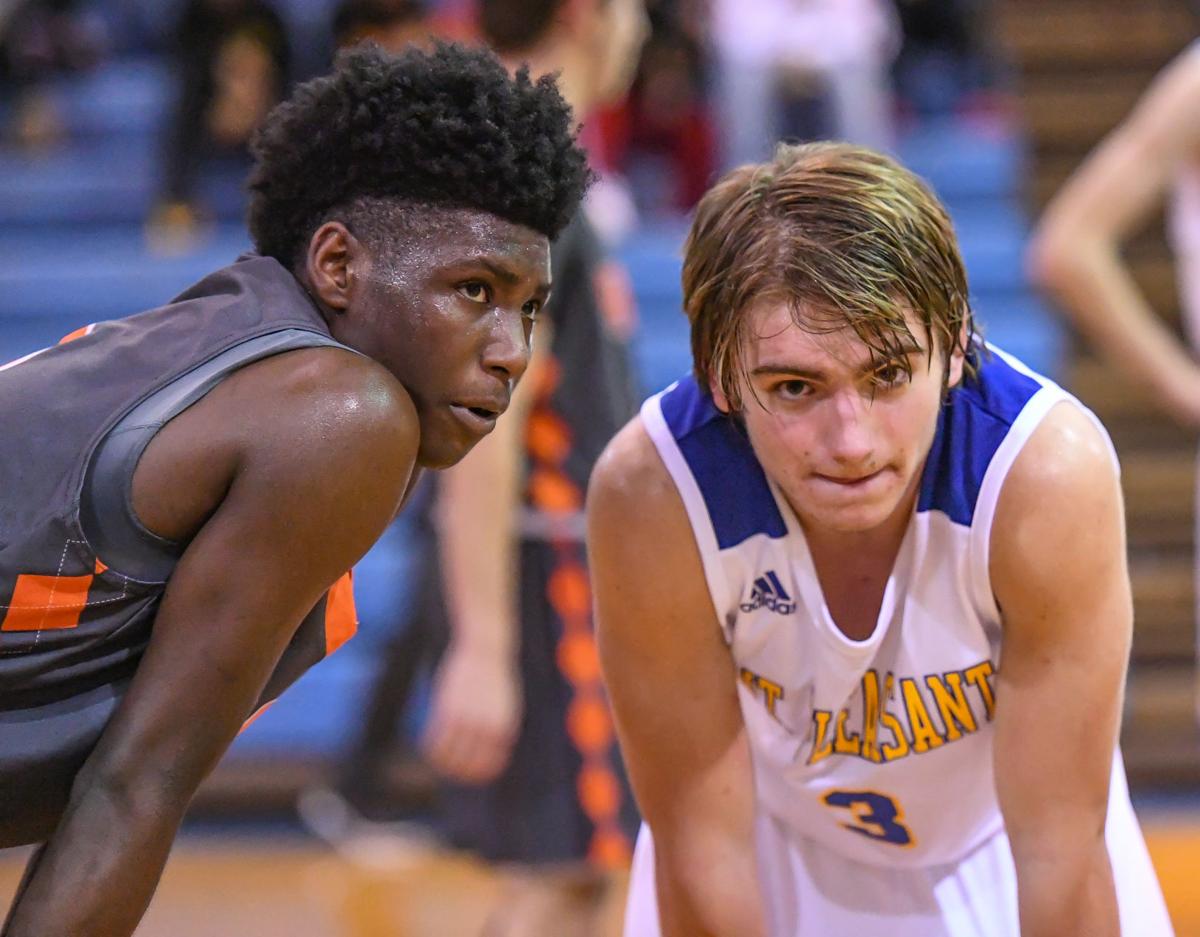 Mount Pleasant's Jacob Price(3) and an Anson player get ready for the inbounds pass.

MOUNT PLEASANT – With plenty of physicality, trash talking, referees being accused of turning a blind eye, and an emotional athlete being ejected (but only after the end of the matchup), parts of Friday’s boys basketball game between Anson and Mount Pleasant could’ve passed as professional wrestling.

But there was one thing that Friday’s Rocky River 2A/3A contest had that prep hoops or WWE rarely have: an impromptu, on-court battle between freelancing student acrobats from both schools during halftime.

Anson may have won the spirited “flip-off” - which included Bearcats standout guard Masson Sanderson landing a couple of “perfect-10” backflips as he emerged from the locker room – but Mount Pleasant won the basketball competition, 70-59, while playing in its home ring, uh gym.

In the fourth quarter, Mount Pleasant registered 15 points from the free-throw line and outscored Anson 24-10 as it gently pulled away over the final two minutes.

For the game, the Bearcats gathered one more rebound (32-31) than the Tigers, despite an obvious height disadvantage, but Mount Pleasant unofficially won the statistical battles in the more gritty categories of recovered loose balls and drawn charges.

“I’m really proud of the kids because they showed a lot of moxie tonight,” said winning coach Jody Barbee. “They did not give in at times. That’s the hardest I think we’ve played down on the floor for loose balls and kind of playing together defensively than we’ve done all year long.”

The Tigers’ gutsy play started early with Jack Pruitt and Brady Duke both drawing charges, Jamal Williams blocking two shots, and freshman Lawson Little scoring all eight of his points in the first quarter. Scoring the first six points of the second quarter, including four from Williams (15 points, eight rebounds on the night) and a pair of Duke free throws, Mount Pleasant opened a 20-12 edge.

The game’s first tense moment started with a scrum over a loose ball on the floor in front of the Mount Pleasant student section between the Tigers’ Jacob Price and the Bearcats’ Lance Shuler. Officials ruled it a jump ball, and though possession was initially ruled for Anson, a discrepancy at the scorer’s table changed the decision in Mount Pleasant’s favor.

“The crowd was in it like crazy,” said Price, a junior guard who dove to the floor for rebounds to save a couple more Mount Pleasant possessions in the second half. “It was loud in here. We just wanted to set a pace, keep the energy up, play defense, and we knew the rest would work out.”

After the stoppage of play, Duke (12 points) nailed a 3-pointer from the left corner to give the Tigers a 27-19 lead. However, the course of events may have inspired Anson more. The Bearcats scored nine of the next 11 points and pulled to within 29-28 before halftime.

Starting with Anson’s Garrett Maner making a 3-pointer 15 seconds into the second half, the third quarter saw nine lead changes. Perhaps fueled by his acrobatic antics during halftime, Sanderson scored eight of his 12 points in the third period, including a layup and a free throw in the closing 35 seconds as the Bearcats led 49-46 going into the fourth stanza.

Price opened the final quarter with a trey from the right wing, and Williams scored the Tigers’ next four points as they built a lead, 53-49, they never relinquished. Shuler, who had a team-high 18 points, made a layup and Anson had a chance to tie the score before Pruitt drew another charge to return possession to Mount Pleasant.

On the other end of the court, Tigers leading scorer Hunter Sloop, who had eight points through three quarters, began warming up when he drove to the hoop with a spin move that drew attention from defender Sam Ingram.

The pair got tangled up and dropped to the floor together creating another tense moment. Sloop went to the line to sink both free throws, the first of nine he made in the quarter to help him finish with 21 points (and 10 rebounds).

While Mount Pleasant was being patient offensively, Anson was looking to make up chunks of deficit at a time. The Bearcats were 0-for-8 behind the 3-point arc in the fourth quarter, including five misses when they were still within five points.

Emotions rose higher with one minute, 28 seconds left when Kenyon Wall, who led Anson with nine rebounds, was assessed a technical foul for the way he reacted to being assessed a regular foul. After the game’s final buzzer, an official approached the scorer’s table and declared Wall had been ejected.

Over the course of the game, Anson’s players and coaches became increasingly testy about what they perceived as a discrepancy in the way fouls were being called against each team. The Bearcats were assessed 30 fouls, while the Tigers were called for 10.

“It’s like a rivalry,” said Anson coach Termell Middlebrooks. “Coach (Barbee) had his boys ready, and my kids kind of let the intensity get to them. (Barbee’s) kids played with their heads. They played very mature and smart, and that hurt us.”