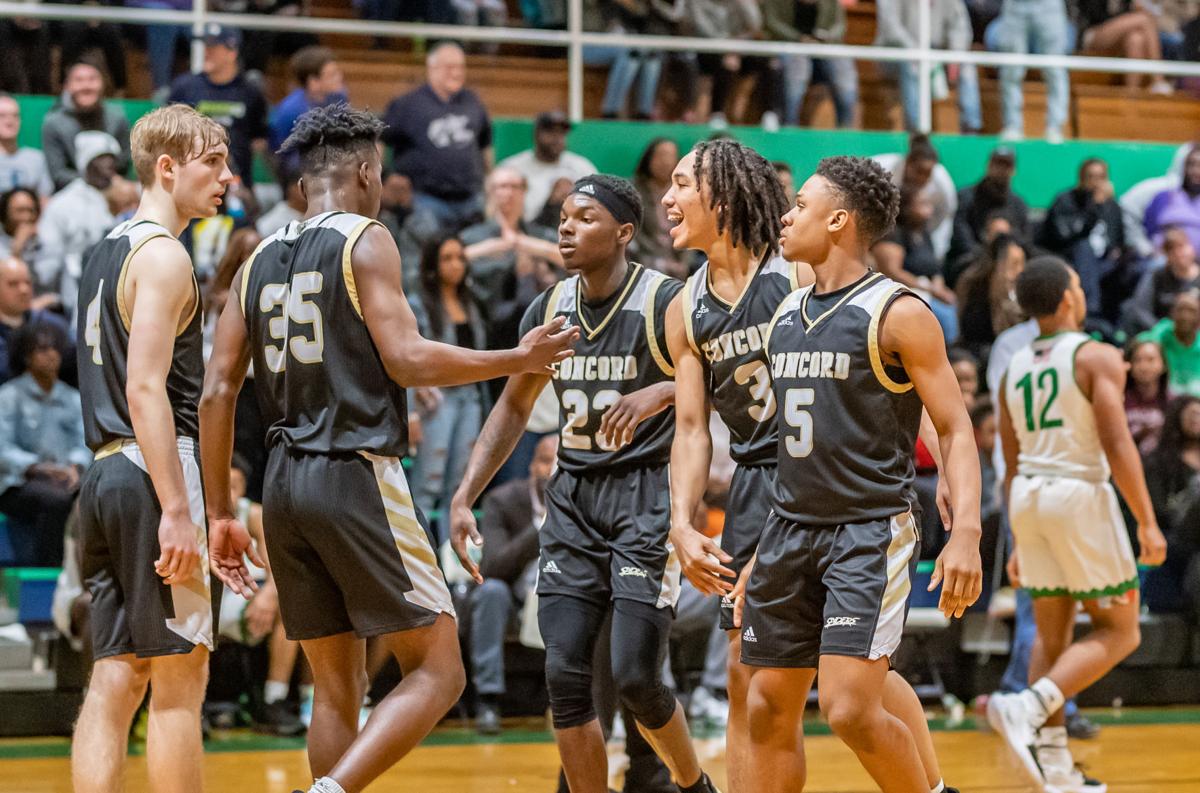 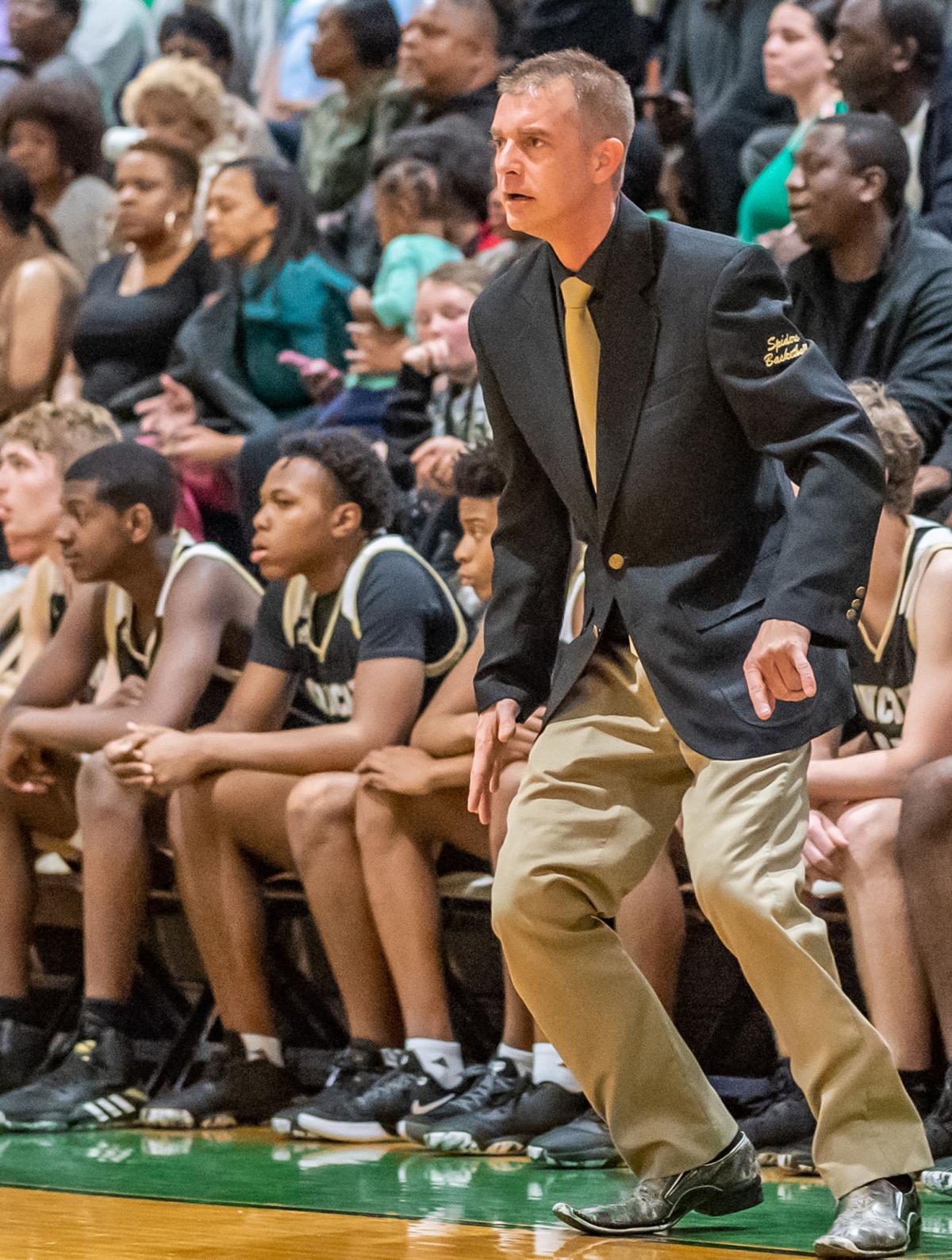 Spiders coach Barrett Krueger gets his team fired up during Friday night's win over A.L. Brown. 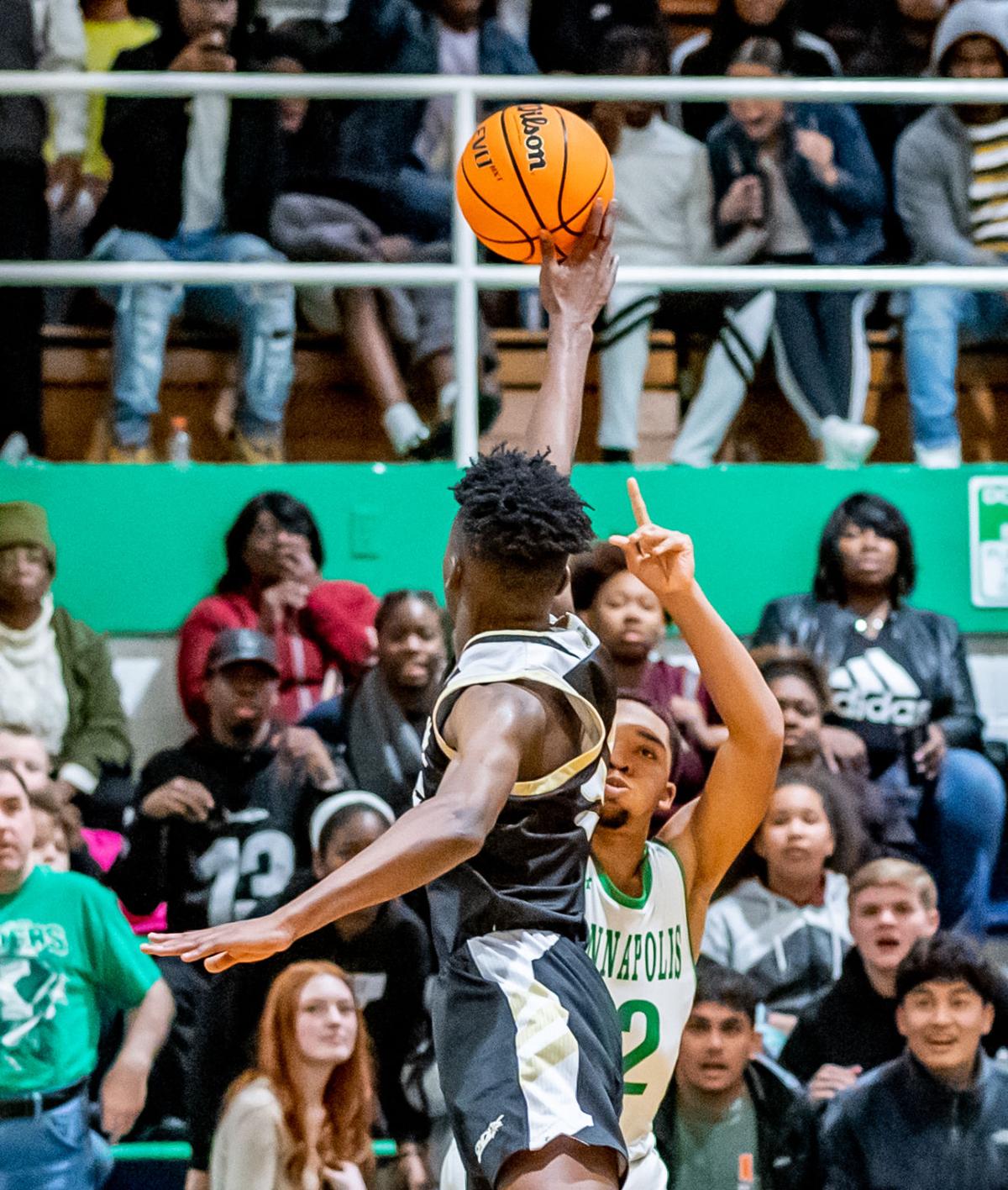 Concord's Joseph Toe (35) gets the big blocked shot against C.J. Wilson in the late moments of the Spiders' upset victory over rival A.L. Brown. 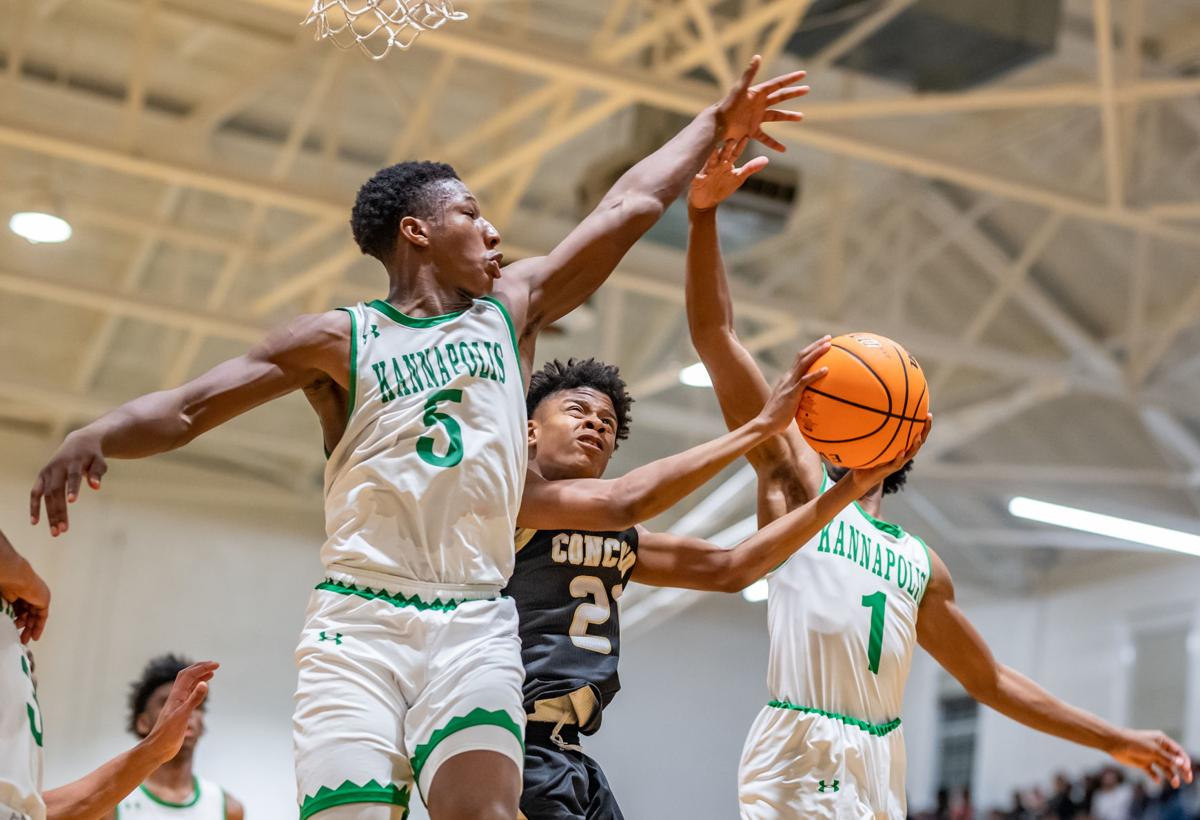 KANNAPOLIS – It took every ounce of heart, energy and even a little bit of luck, but the Concord Spiders boys basketball team’s defense held on just enough to steal a pivotal road win against Cream of Cabarrus No. 3-ranked A.L. Brown, 55-54, in front of a raucous Bullock Gym crowd Friday night.

“Any time Concord beats Kannapolis, that’s a heckuva good night,” said Spiders coach Barrett Krueger. “It was an awesome environment, and to win in this atmosphere in this packed house, it’s awesome.”

It was Krueger’s first game as a head coach in this rivalry, snagging a big win to give the Spiders a 7-7 record and 1-0 in South Piedmont 3A Conference play. The Wonders fell to 11-3 overall and 1-1 in conference.

After a quick 15-5 early lead for the Wonders, the Spiders battled back to tie it at 32 at halftime. For the rest of the game, the score never was larger than two possessions.

Scoring was at a premium all game, and the defense shined. The last four minutes were proof of that, with no team making a field goal in the final 1:45 minutes. And with 35.2 seconds left, both defenses made the biggest plays of the game.

A.L. Brown’s Amari Grier sank two free throws to cut the Spiders’ lead to 55-54. On the inbounds, he helped step up a corner trap on a press, and an errant pass off the fingertips of Concord’s Nijel Robinson forced a turnover.

On the next possession, the Wonders missed their first shot and got the offensive rebound, but Robinson stole the ball and was fouled with 19.9 seconds left.

He missed the front end of the one-and-one situation, and A.L. Brown pushed the ball up the court. In the right corner of the 3-point line, C.J. Wilson lined up his shot, but Concord's Joseph Toe flew across the court and blocked the shot.

“All my nerves, energy were running through me,” Toe said. “(When I blocked it), I just thought, ‘Let’s go!’ I felt like we won the game.”

The game wasn’t over just yet.

After Robinson gathered the ball after the block, he was immediately fouled with 9.4 seconds left. Again, he missed the first free throw of a one-and-one, the Wonders grabbed the round, and Grier dribbled up the court. He ran to the left side of the corner and tossed a pass back to Briggs, who pump-faked a 3-pointer as a Concord defender jumped past him.

The lefty shooter took a step to his right and fired a 3-pointer. The ball rattled between the rim twice but bounced out as the clock expired.

Throughout the second half, rebounding and steals were the key difference-makers for the Spiders. In the first quarter when the Wonders took a 10-point lead, the Spiders allowed 10 points off second-chance points. In the next three quarters, they only gave up two offensive rebounds, creating two points.

“I told the guys at halftime, ‘Guys, if we don't out-rebound them, we’re not going to win this game,’” Krueger said. ”I thought we really did a better job of that in the second half.

On top of that, Robinson had five steals and Toe had four steals in the game. In the second half alone, as a team, the Spiders had 10 steals, scoring 13 points off those turnovers

“We definitely showed signs of a young team and inexperienced team, but earlier in the season we lost these type of games,” Krueger said. “I think we’re taking the right steps in winning them. Even though we are still making mistakes, we are finding ways of winning them. It was a great night overall.”

Klutz said his Wonders struggled against Concord’s zone defense, throwing lazy passes across the court and not attacking the gaps like they were supposed to do.

“We’ve got to learn how to manage games, how to communicate better offensively,” Klutz said. “Sometimes, we try to do it by ourselves, so we need to rely on our teammates more.”