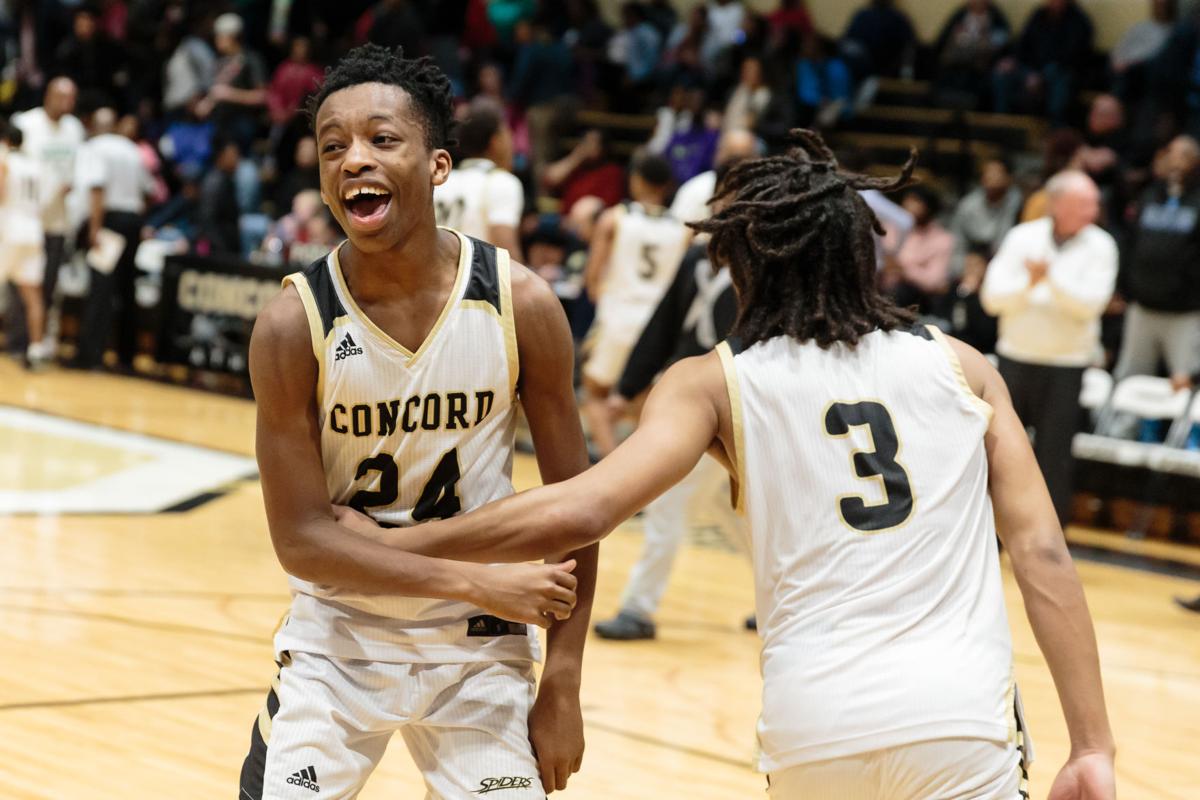 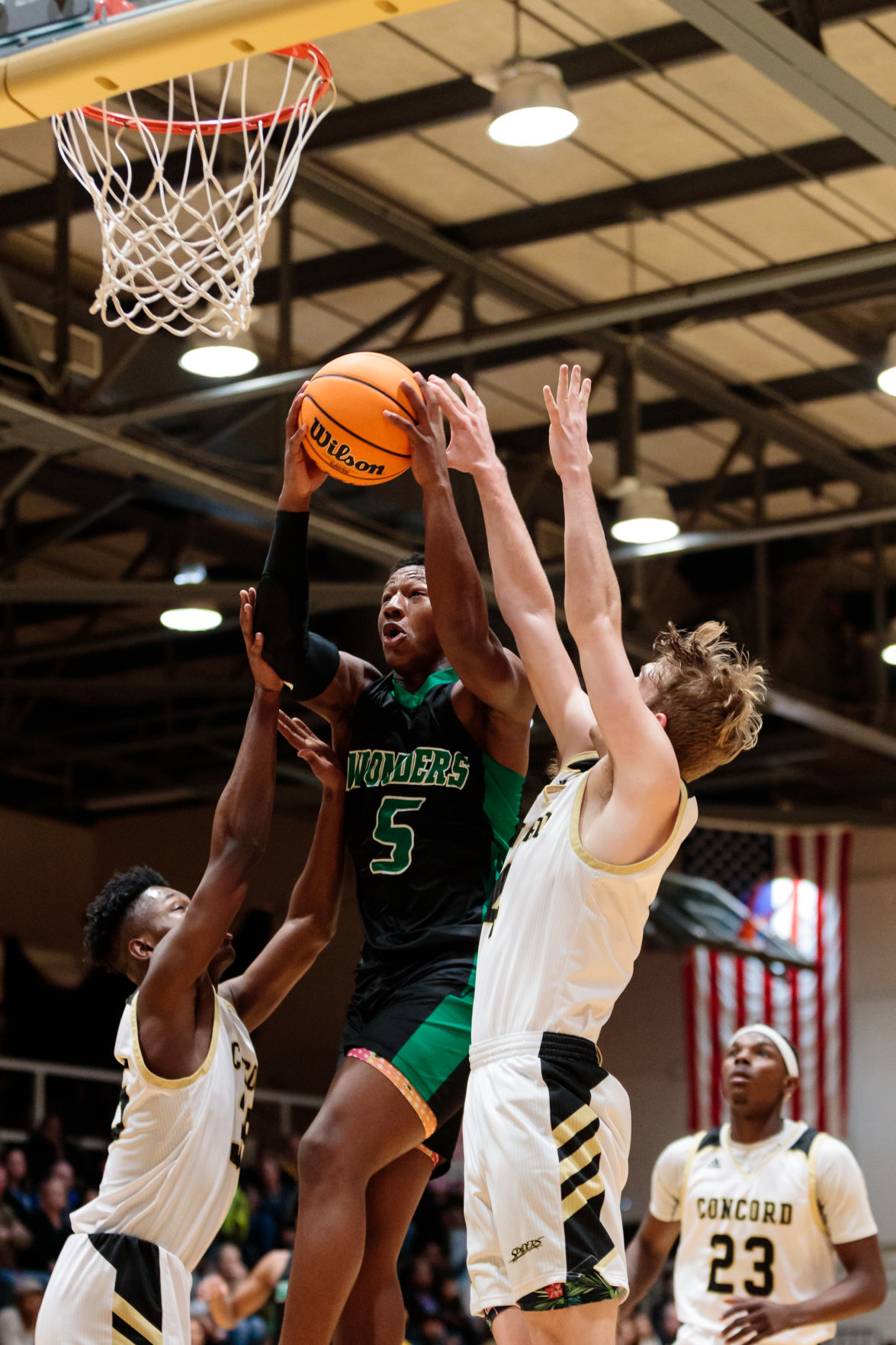 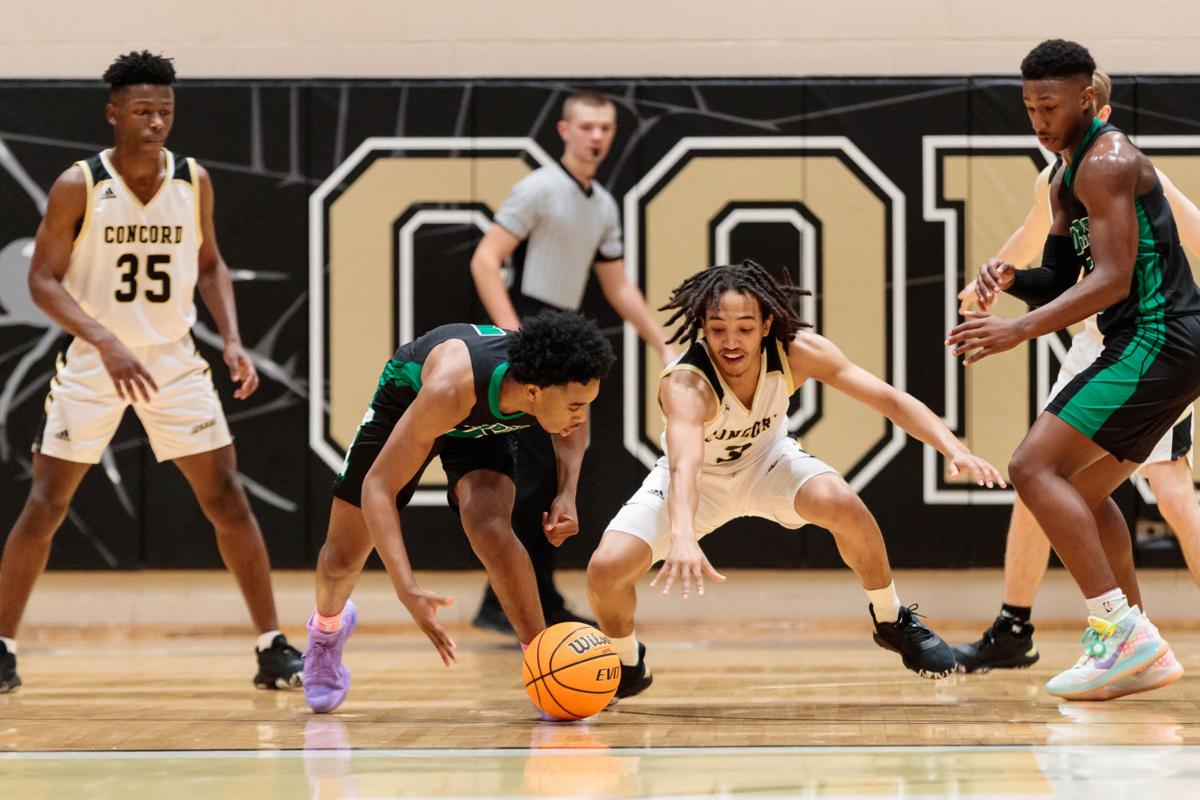 Concord's Jonah Mott (3) battles to get a loose ball on Friday Night at Concord High School. 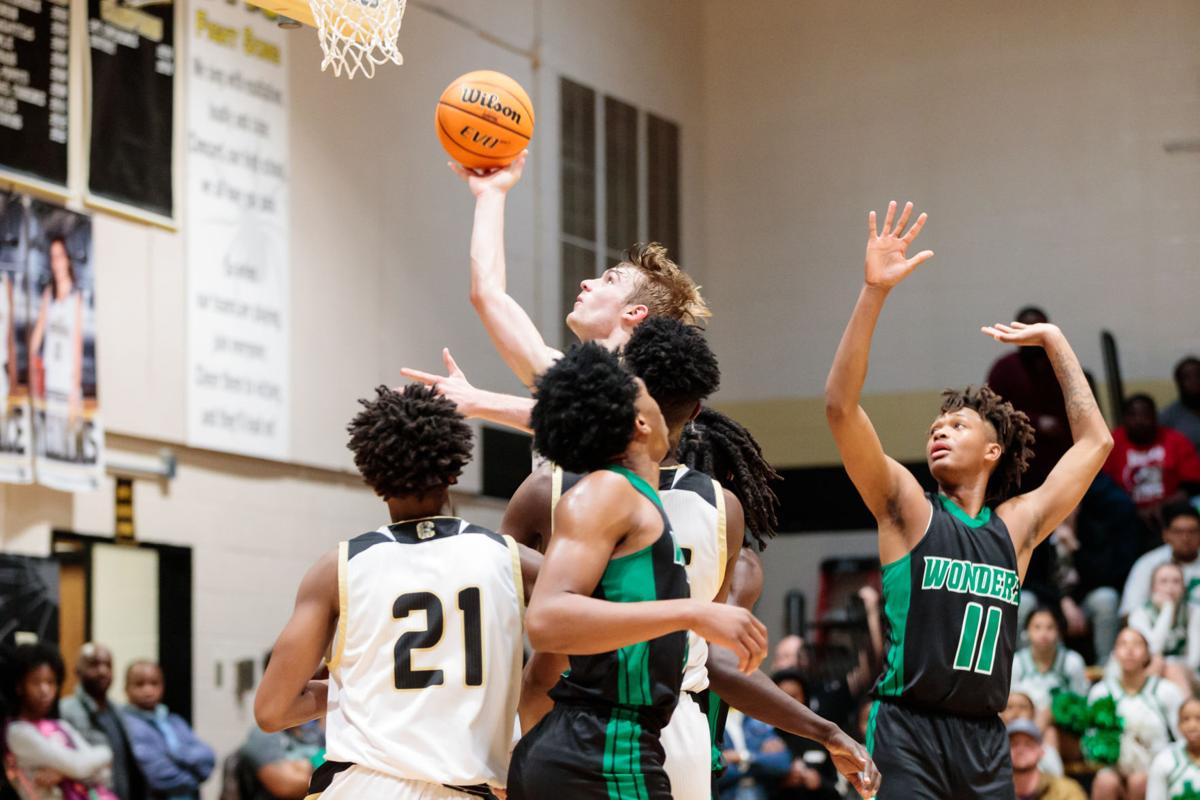 Concord's Magnus Swinger (4) gets to the basket over A.L. Brown defenders on Friday Night at Concord High School. 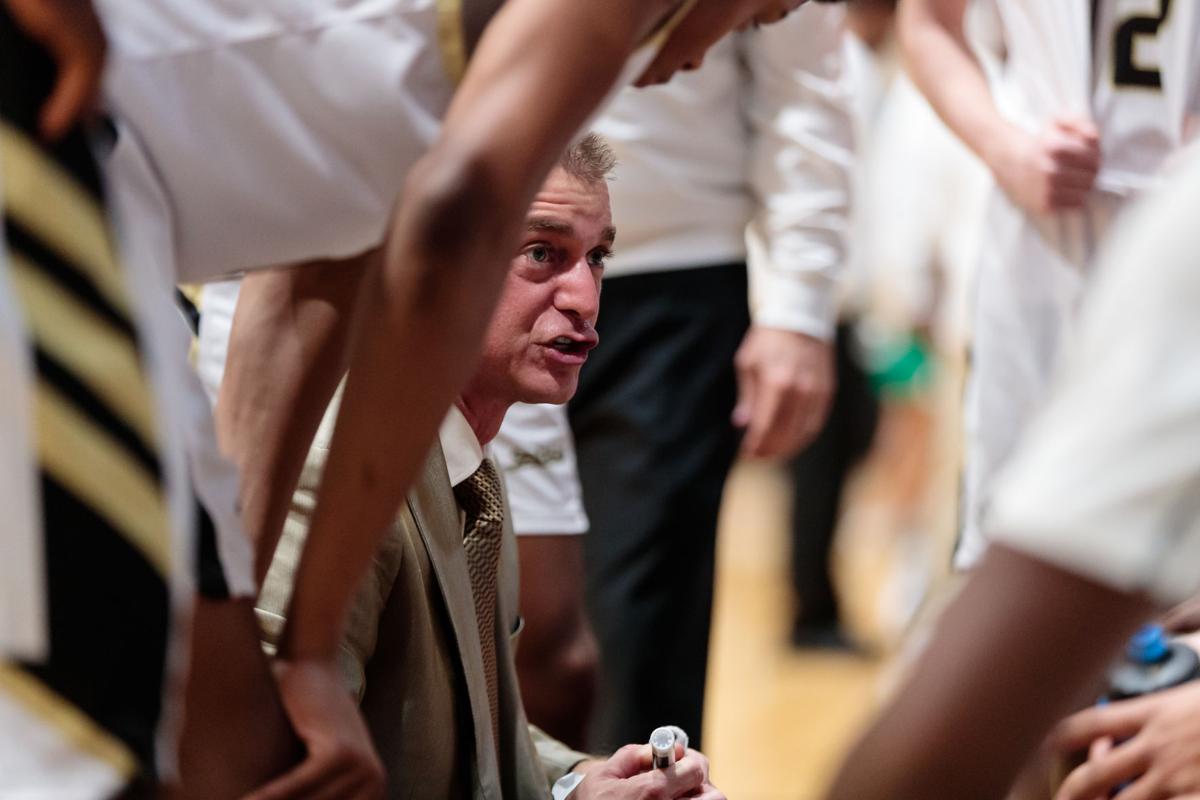 A.L. Brown's Head Coach Shelwyn Klutz talks to his team during a timeout on Friday Night at Concord High School. 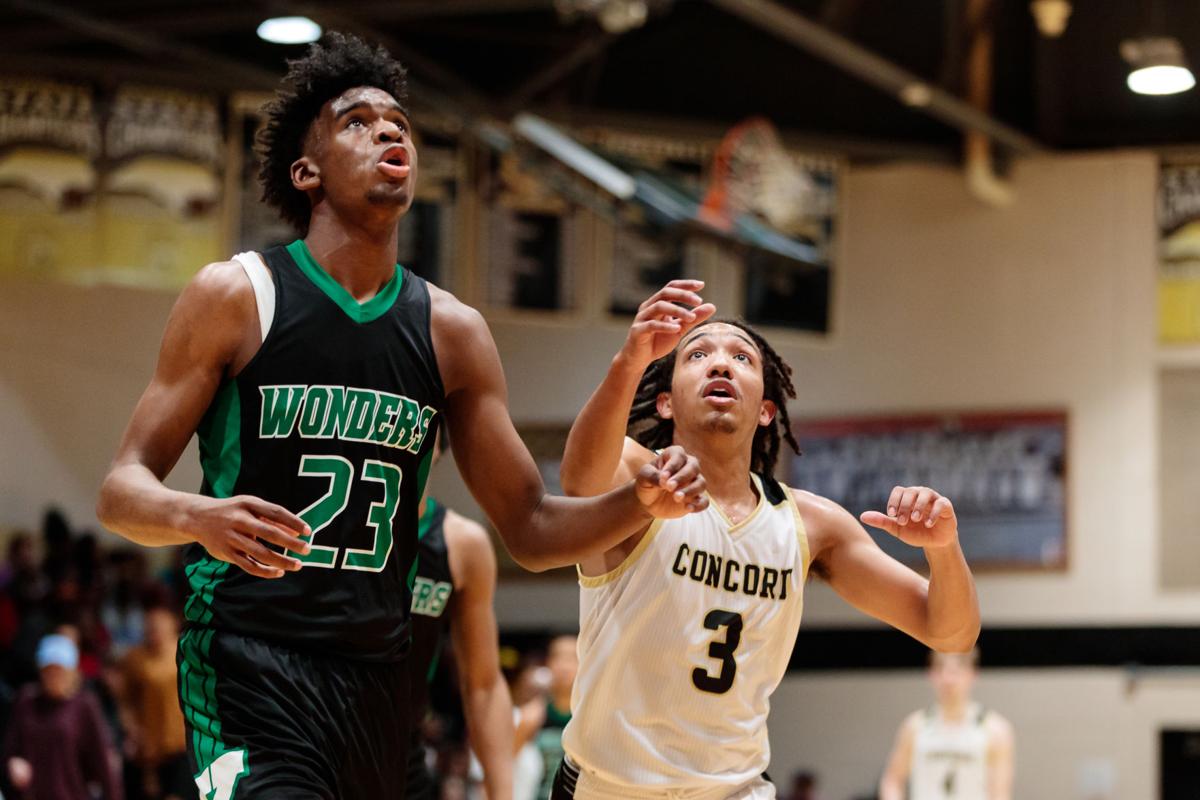 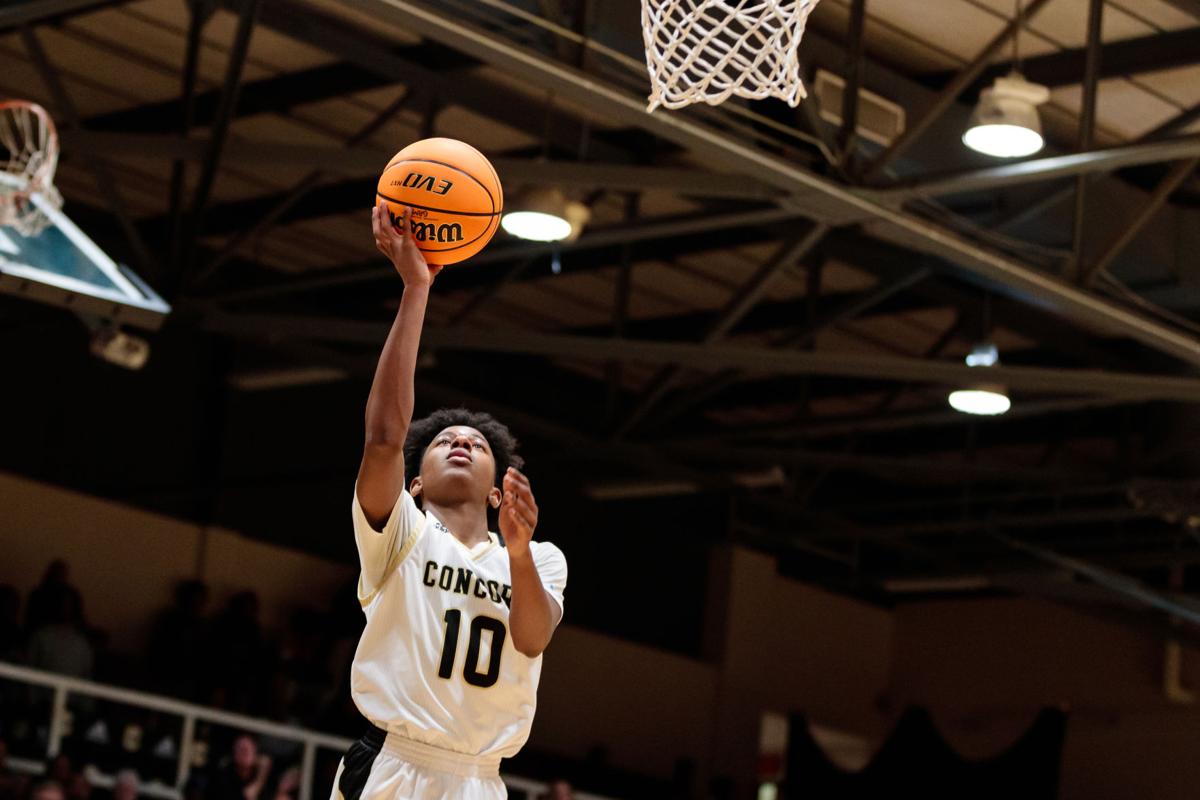 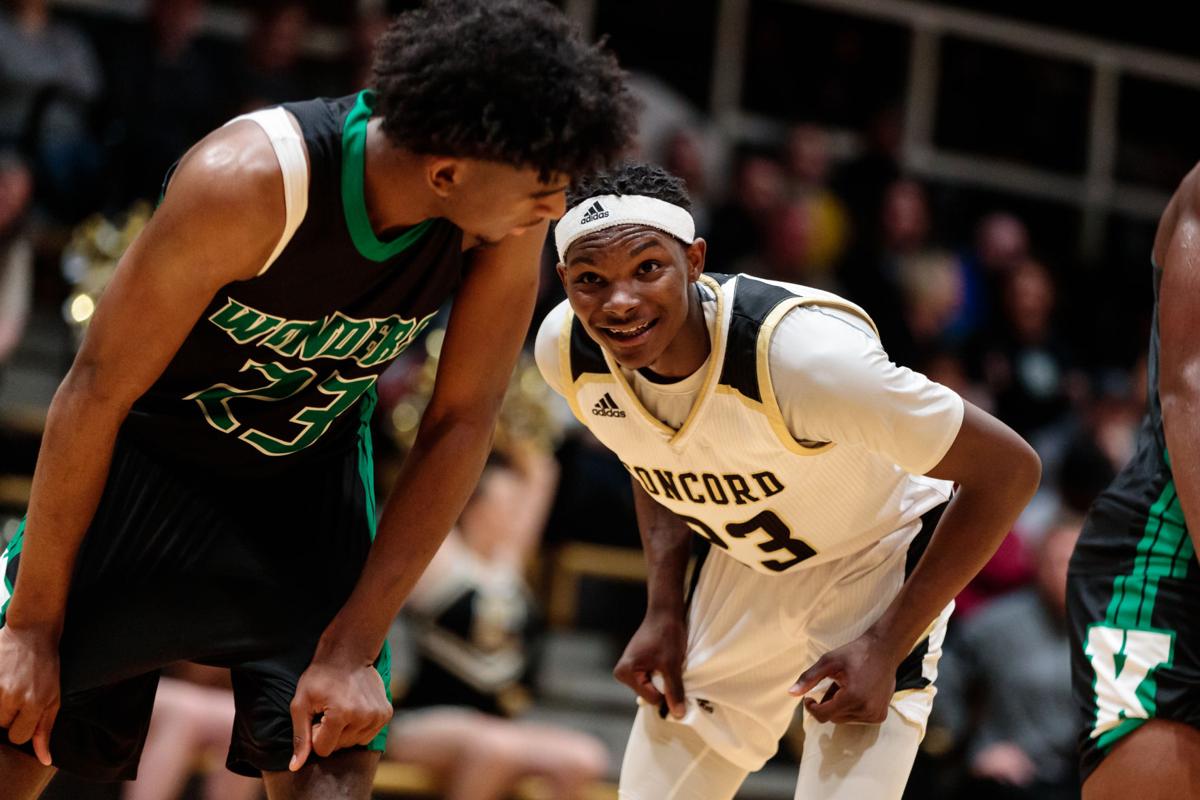 A.L. Brown's Head Coach Shelwyn Klutz talks to his team during a timeout on Friday Night at Concord High School.

CONCORD – The Concord boys basketball team gave its loud fans something to cheer about early and often, and the energy lifted the Cream of Cabarrus fifth-ranked Spiders in a 78-66 win over the No. 6 A.L. Brown Wonders Friday night at Rimer Gymnasium.

“Coach told us it would be a packed house, and he said we have to be prepared to play with energy,” said Concord senior Nijel Robinson. “We fed off the crowd energy and student section, and we played with our hearts.”

Both teams are in second place in the South Piedmont 3A Conference, but Concord’s pair of victories over the Wonders give it the tiebreaker over A.L. Brown. Three weeks ago, the Spiders defeated the Wonders, 55-54.

The Wonders were up 5-0 early, but the Spiders got red hot after that. Johnakin Franklin hit back-to-back 3-pointers to put Concord ahead, 6-5, and his shooting became contagious.

“I think it (set the tone),” said Franklin, who tied for a team-high 19 points. ”It got my other teammates going, too. I knew if someone could knock down some shots, it would get the team going.”

Robinson scored eight straight points with two free throws, a 3-pointer and a jump shot. Then Magnus Swinger, who joined Franklin with 19 points, closed out the first quarter with a post-move layup and back-to-back 3’s.

For much of the rest of the game, both teams’ offensive pace mirrored each other.

After trading baskets early in the second quarter, the Spiders went on a 9-2 run to extend their lead to 33-19, but the Wonders ended the quarter with a 14-7 run, highlighted by a D.Q. Foggie steal and pass to Kheni Briggs, who threw an alley-oop to J.D. Glenn. That cut the deficit to 41-33 at halftime.

Concord stayed hot in the third quarter, with Franklin and Jonah Mott hitting back-to-back 3’s to take a 47-33 lead. Swinger added another 3-pointer, and the Spiders kept the offensive train rolling, taking a 59-46 lead to end the third.

The Spiders shot an amazing 60 percent from the field as a team in the first three quarters. Concord coach Barrett Krueger credited his team’s ball movement and player movement for the offensive success.

“One of ours keys was catching and squaring up and seeing things first,” he said. “I felt like the last couple games we’ve been antsy or too quick, too fast of a pace, and we did a good job slowing down our minds and playing to a pace we’re comfortable with.”

The Wonders started to make a comeback in the fourth quarter, cutting the deficit from 15 points with three minutes left to eight points with possession of the ball with one minute left.

However, their shot missed, and Concord's Marcellus Washington and Joseph Toe cemented the win, combining to hit 7 of 8 free throws.

“We played a lot harder in the second quarter throughout the rest of the game,” Klutz said. “But when you dig a hole like that in the first quarter, you have to play perfect basketball, and (Concord) kept making shots, and we could never get over the hump.”