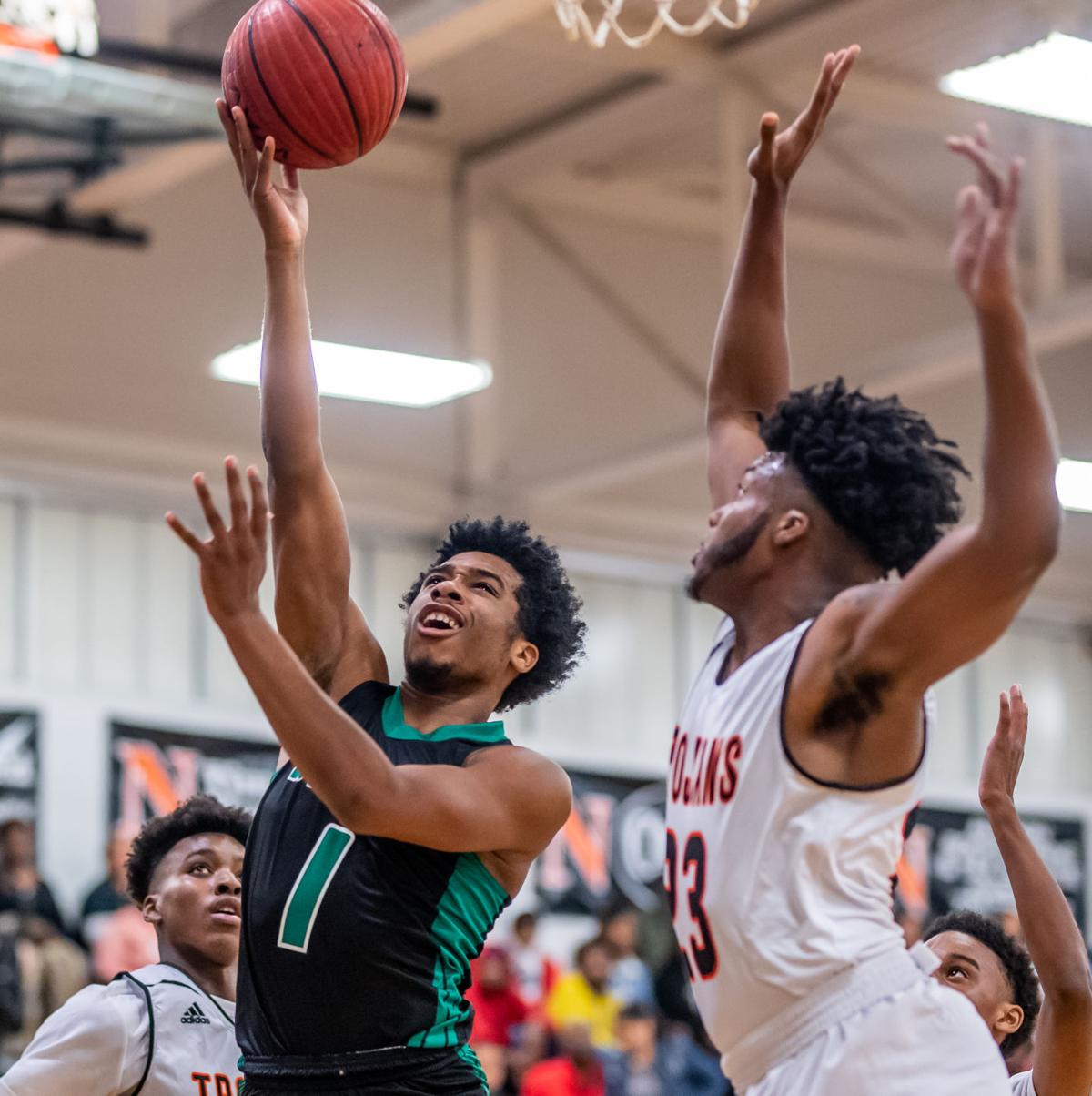 Amari Grier(1) gets inside for the quick basket during Tuesday night high school basketball action at Northwest Cabarrus. 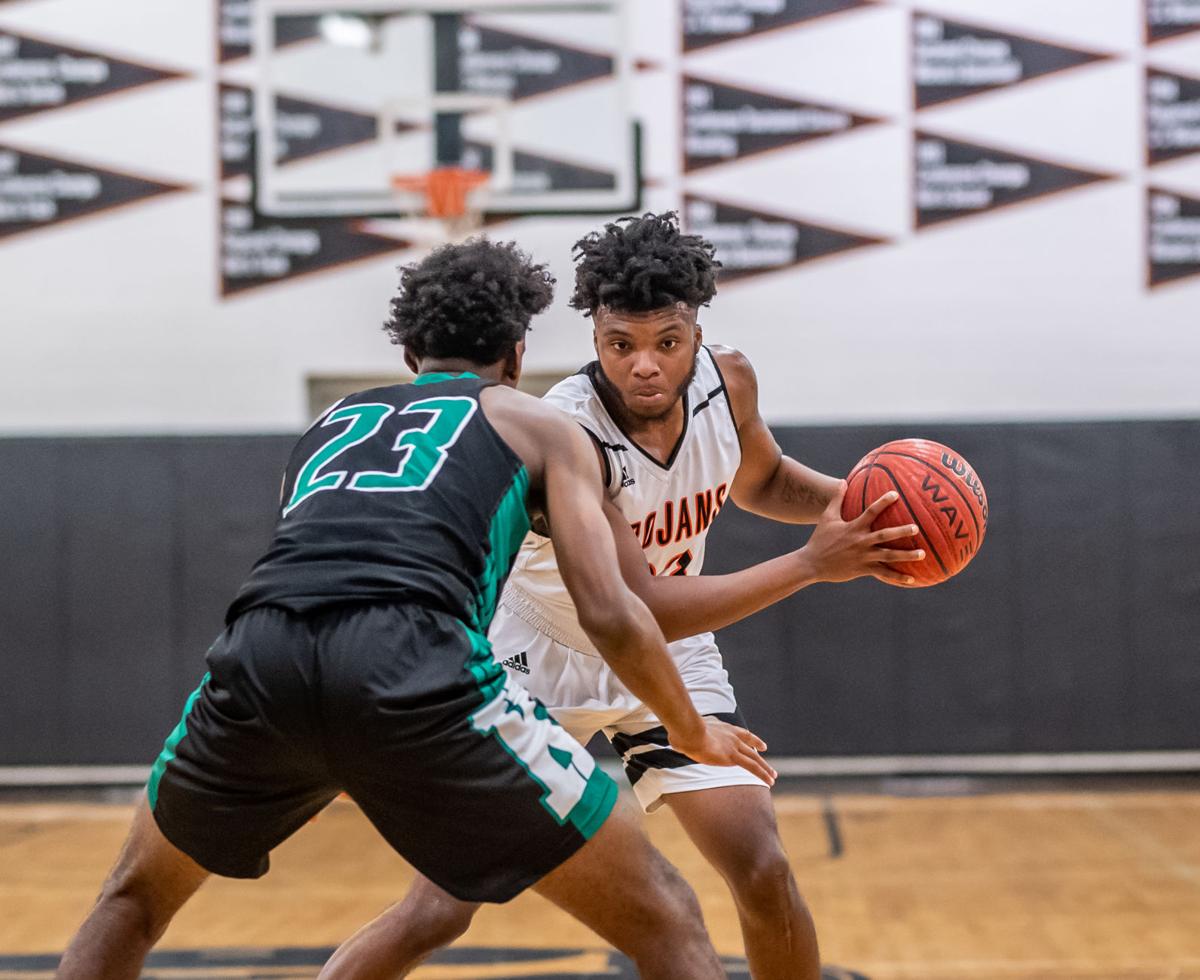 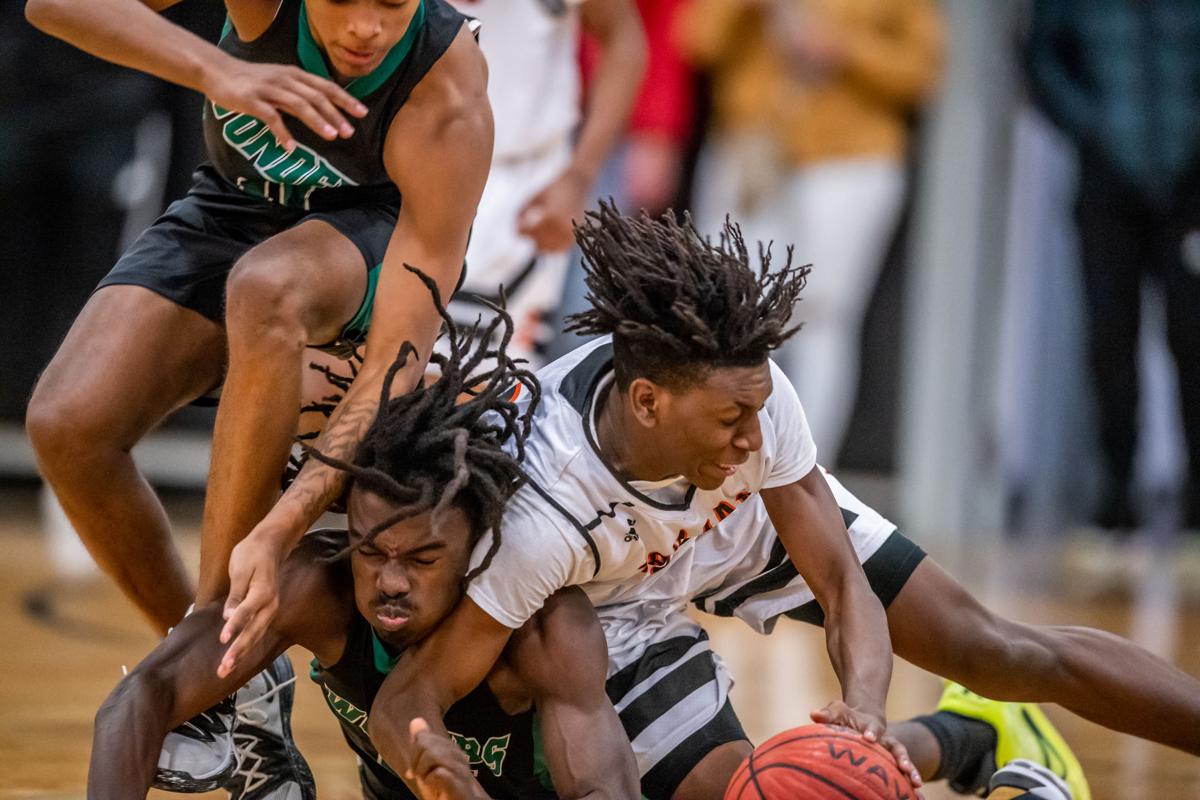 A.L. Brown and Northwest Cabarrus players fight for a loose ball during the game Tuesday night.

CONCORD – It certainly wasn’t a shooting technique you teach, but it worked.

With the clock running down and the score tied at 59, A.L. Brown boys basketball player Amari Grier came off a screen, and a defender stood up in his face. Grier threw up a 3-pointer, shooting it over his head like a soccer player throws a ball in play.

Miraculously, it banked off the backboard and went through the net, capping off the Wonders’ nine-point, fourth-quarter comeback on the road to beat the Northwest Cabarrus Trojans, 62-59, on Tuesday night.

“It was definitely like an ‘Oh, man’ shot,” Grier said.

The buzzer-beater gave the Cream of Cabarrus No. 3 Wonders their fifth straight win and a 1-0 start to South Piedmont 3A Conference play.  The Trojans have now lost four of their last five games, dropping to 4-8 on the year and 0-1 in conference play.

Before Grier’s game-winning shot, the Wonders were down 59-57 with 45 seconds left. J.D. Glenn blocked a shot, and Grier grabbed the ball and rushed down the court. He ran down the left side of the lane, jumped and passed the ball to a cutting Keim Moore.

Moore caught it and hit a layup to tie the game.

“Before that, (Moore) told me he had a shorter person on him,” said Grier. “And when I was driving, he cut. I pulled up in the air and passed it, and he caught it and scored it.”

The Trojans then had their chance to win the game. They passed the ball around to get the defense moving, but a Trojans player lost the handle to the ball, and multiple players jumped on the floor. With both teams holding onto the ball, A.L. Brown coach Shelwyn Klutz got the timeout call with 12.4 seconds.

“We were trying to run a break, get in our break set and get something toward the basket off the swing -- that’s it,” said Trojans coach Eric Jackson. “We handled it a bit too much and turned it over, but sometimes that’s how basketball goes.”

“We settled for jump shots,” Klutz said. “(We were) not being patient and trying to get it all back in one possession.”

On the other side, the Trojans couldn’t miss, especially Mason Trombley. Trombley didn’t see action off the bench until the third quarter, but he made his presence felt immediately.

In the fourth quarter, the roles switched.

The Wonders came out firing, scoring on three of their first four possessions to cut the deficit to four points. Defensively, they held the Trojans to only six points that entire quarter. Klutz credited the defense that quarter for putting the team back in the game.

“We had guys doing a better job playing defense,” Klutz said. “C.J. Wilson, D.Q. Foggie gave us a good lift defensively, and that was a major difference.”

Jackson said his team needs to be able to finish games. The Trojans shot a low 10-for-24 from the free-throw stripe and missed key layups in the fourth quarter.

“You’ve got to be able to finish ... that’s what it boils down to,” Jackson said. “It’s every play matters, and I don’t think we quite understand that.”