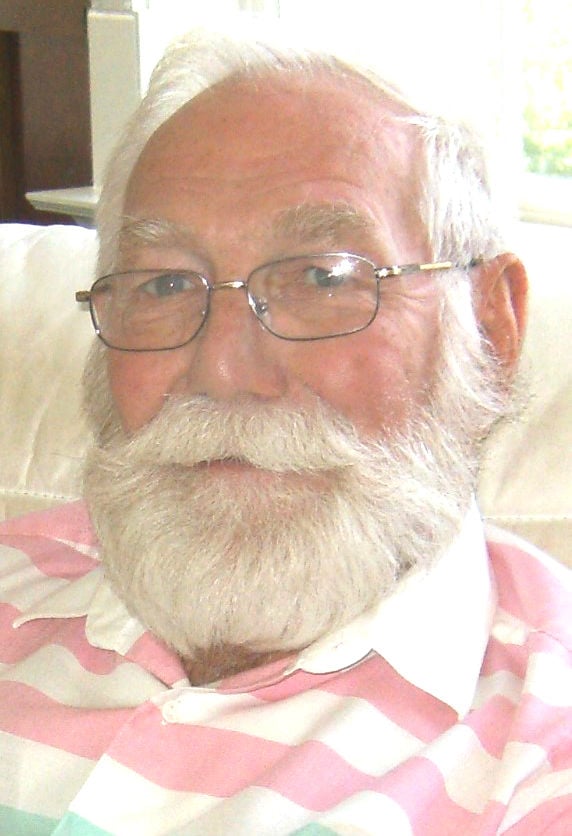 August 2, 1935 - March 7, 2020 Howard Frederick Schaeffer, Air Force veteran, IBM senior engineer, Santa Claus, RV deliverer with Tom Johnson, Webster's Radiator Parts deliveryman, and Walgreens drug runner (deliverer), paddled into heaven Saturday March 7, 2020, surrounded by family. He was born in Garrette Run, Pa., Aug. 2, 1935, to the late Howard and Velma Schaeffer. Howard of Concord and formerly of Boulder, Colo., is survived by his wife of over 63 years, Patricia; four daughters, Diane (Brad) Willert of Lafayette, Colo., Judy (Carl) Aragon of Boulder, Colo., Linda (Lannie) Cruse of Concord, and Betsy (Rocky) Kupfner of Superior, Colo.; 13 grandchildren; 23 great-grandchildren (another due anytime); one sister, Nancy (Pat) Smail of Galeton, Pa.; one brother, Larry (Mary Ann) of Leechburg, Pa.; six nieces and nephews; two fur babies, Buddy and Rugby; his Center United Methodist Church family; and a host of friends. The names Howard heard the most were Dad and Papa; even his wife called him that. Papa was his family's biggest fan at any event. He was one of the loudest and one of the proudest. Because of him, we are all stronger. Papa never met a stranger, whether he was camping or campaigning. Papa had a big heart. He loved who we loved. Papa was ornery. He had no qualms in questioning one's opinion or arguing his own. Papa loved to play practical jokes and tease. Even if he disagreed with you, he'd give you the shirt off his back, but not his Trump hat. He was generous, kind and supportive, and always had a word of advice. He was also frugal and industrious. Papa could create works of art with his hands. There was never a problem he could not solve. When the car broke down, he fixed it; when the Kayaks needed a lift, he built it; if a grandchild needed hitched, he got ordained. If Nana needed to be cared for, he learned to cook and if her hair needed to be tamed, he learned to style. Papa was the strongest man we know. As an Airman, he stole his beautiful wife from a Marine. After a double knee replacement, he was up on water skis outlasting us all. He would build and grow a garden, tilling and hoeing by his own hands. He enjoyed spending time with family, camping/RVing and went on long backpacking trips well into his 80s. If he couldn't find something at a garage sale, he probably didn't need it. Papa had a relationship with Jesus and helped guide many of us to Jesus. We are comforted to know where he is now. Papa never complained and frequently encouraged his loved ones to "stop yammering." He never judged us and loved us for who we are. He was always there when we needed him. He had a 'mosquito bite' or a 'hairy kiss' waiting, jars to catch lightening bugs and a turned down hearing aid (faking he could hear). Pa had grit, and knowing he was a part of us gave us grit. He lived an extraordinary and accomplished life. He instilled morals, values and a sense of humor. We thank him for having the courage to ask a man to trade seats on a bus because he wanted to talk to a girl. A memorial service to celebrate Howard's life will be held at 11 a.m., Saturday, March 14, at Center United Methodist Church, 1119 Union St. S in Concord, conducted by Pastor Tony Allen. Interment will follow in the church cemetery with military graveside rites. The family will receive friends at the church, one hour prior to the memorial service. In lieu of flowers, donations can be made to St. Jude Children's Hospital, 262 Danny Thomas Pl., Memphis, TN 38105; the Shriners Hospitals for Children, 604 Doug Mayes Pl., Charlotte, NC 28262; or to the Humane Society of Greater Cabarrus County, 2010 Wilshire Ct. SW, Concord, NC 28025. Whitley's Funeral Home www.whitleysfuneralhome.com