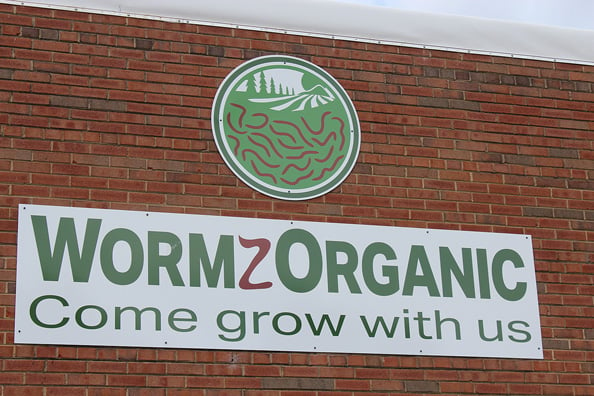 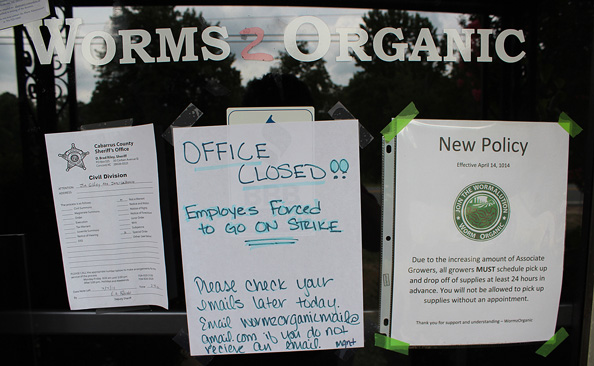 The Wormz Organic office on Manor Avenue in Concord was closed and locked after employees walked out in protest.

The Wormz Organic office on Manor Avenue in Concord was closed and locked after employees walked out in protest.

CONCORD, N.C. – At least 100 people are crying foul after the owner of a new Concord business allegedly skipped town with their money.

James Albert Lawhorne reportedly left legal troubles and irate farmers behind in Alabama after his tomato-growing business there collapsed. Lawhorne came to Concord with a new name – Jim Gilley – and set up a worm-farming operation in February, recruiting “associate growers” at $5,000 a pop on the promise of easy money.

Lawhorne apparently was last seen in Concord on June 13, driving away in the company van. He was arrested Friday night in Cherokee,  South Carolina and charged with driving under the influence.

He is also wanted on forgery and fraud warrants out of Tennessee, according to Concord police.

Wormz Organic, located at 236A Manor Ave. SW, Concord, is now closed and locked after employees went on strike Monday claiming abuse and shady business practices by Lawhorne, according to court documents and emails obtained by The Independent Tribune.

The business, Wormz Organic LLC, was registered with the state on Feb. 6, 2014, and recruits “associate growers” (AGs) to farm red wiggler worms, which produce high-quality organic soil with their castings, or droppings.

At least 115 people signed up to be associate growers, said an AG from Statesville who did not want his name revealed. For a $4,950 start-up fee, participants got 60 pounds of worms, 100 bins, bedding and food for a year and technical support, he said. They would farm the worms at their homes, and Wormz Organic would then buy the organic soil produced by the worms.

The company advertises that growers can make $10,000-$35,000 a year while working as little as 90 minutes a day, according to its website and public Facebook page.

The business worked for a time, but it wasn’t long before employees and growers started noticing problems.

Jennifer Langford is listed as the “registered agent” of the company, according to state documents. She said in a Facebook post obtained by The Independent Tribune that Lawhorne told her the company had contracts with Fortune 500 companies to buy the worm castings from the AGs.

“To this day the only castings that have been sold were sold to locals at farmers markets,” she told the AGs in the Facebook post. “He solely was running this company into the ground by not doing his end of selling the castings and removing money from the checking account.”

Neither Lawhorne nor Langford could be reached by telephone Friday afternoon.

The anonymous AG said he traveled to Concord last week and saw thousands of bags of worm castings sitting on the loading dock of the Manor Avenue facility.

“If you’re not selling something, it’s a dead-end road,” he said. “They basically had never sold any castings.”

Facebook pages associated with Wormz Organic were littered Friday with comments ranging from questions about missing supplies to angry accusations to warnings to others to stay away.

“I have more than the initial 5k tied up in this, and I haven’t even received any supplies,” read one post.

“This shouldn’t even be happening in a real business,” read another.

Langford told growers in her post that Lawhorne took the company work van June 13 and had not been seen since.

Lawhorne, 52, served time in Texas for felony larceny and forgery, according to state criminal records, and Concord police say he is wanted in Tennessee for failing to appear on forgery and fraud charges.

Lawhorne persuaded hundreds of farmers in the Tennessee Valley region of northern Alabama to grow tomatoes for a business called Cypress Creek Organic Farms, claiming they could make thousands of dollars, according to a report by TV station WAFF with the headline “Former organic tomato company owner resurfaces with worm business in NC.”

The Alabama business failed last year, and Lawhorne still owes 24 farmers $228,000 from a default judgment in a civil case associated with the Cypress Creek business, according to the WAFF report.

Before that, WAFF reported, a businessman invested more than $100,000 with Lawhorne in a communications company. He has been seeking restitution from Lawhorne since 2006.

Langford filed a civil complaint and was granted a temporary no-contact order Monday in Cabarrus County after she accused Lawhorne of abusive behavior including intimidation, threats and even bugging her car and office.

In the complaint, Langford told authorities she discovered Lawhorne’s true identity. He had been known to her as Jim Gilley.

When she confronted him, he “began to threaten me,” she said in the complaint. “I have numerous text messages saying things like ‘I will ruin you, you have no idea who you are fooling with.’”

In the civil complaint, Langford said she confronted Lawhorne, saying “I would not continue his fraud and the employees needed to leave the company and separate themselves from him.”

He “threatened to call the news to cause the company to fall onto me,” the complaint read.

Concord Police Department Deputy Chief Allen Overcash said in an email there are no local criminal charges pending against Lawhorne.

“We have not closed our case, though,” he said.

LOOKING FOR A BUYER

Growers have pointed out the distributed business model under which Wormz Organic was operating is still viable.

“It was working very well,” said grower Brian Riggan. “If the guy had been honest, it seems like he could have made some money on it in an honest way.”

The anonymous grower said Lawhorne used a model that has worked in other places to run a “short-term scam deal.”

AGs who have been left with worms and dirt are trying to get someone to buy the company so they can recover their investments and continue to farm.

“It is a sustainable business model,” the unnamed source said. “It would be really great if someone would step in and buy this business.”

“I, for one, did not start this because of Jim Gilley or Jamie Lawwhorn [sic] or any of the WO gang,” read a Facebook post. “I believed then and believe now this can work with or without them. We need buyers for a product. Let’s find some.”

LAKE MARY, Fla. -- Wormz Organic founder James Lawhorne has been captured in Florida, where a bail bondsman says he was setting up a pickle bu…

MONTGOMERY, Ala. -- The man who allegedly scammed Cabarrus residents out of thousands of dollars in worm farming scheme has pleaded guilty to …