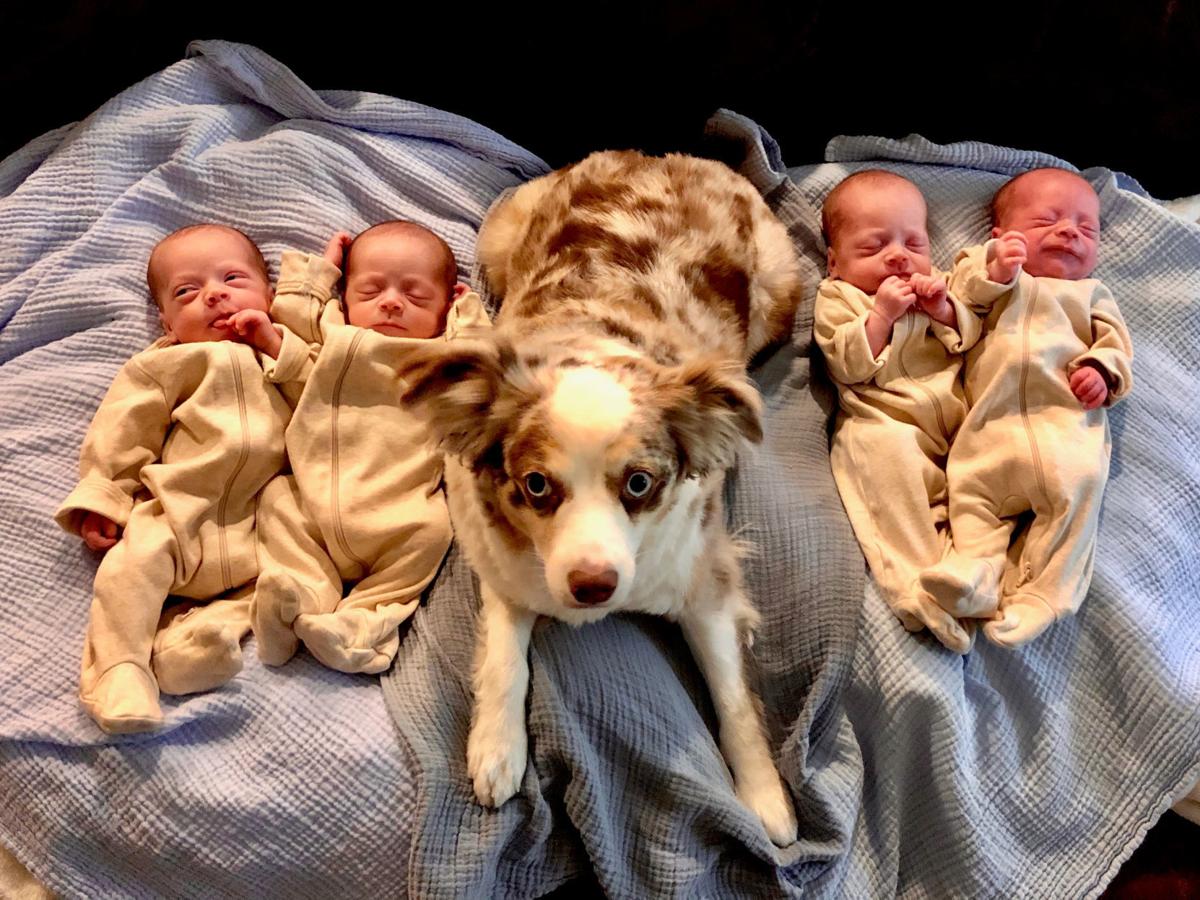 The Marr quadruplets with Zeke, the family dog. Monochorionic identical quadruplets are exceptionally rare, with only 72 cases recorded in medical literature. MUST CREDIT: Family photo. 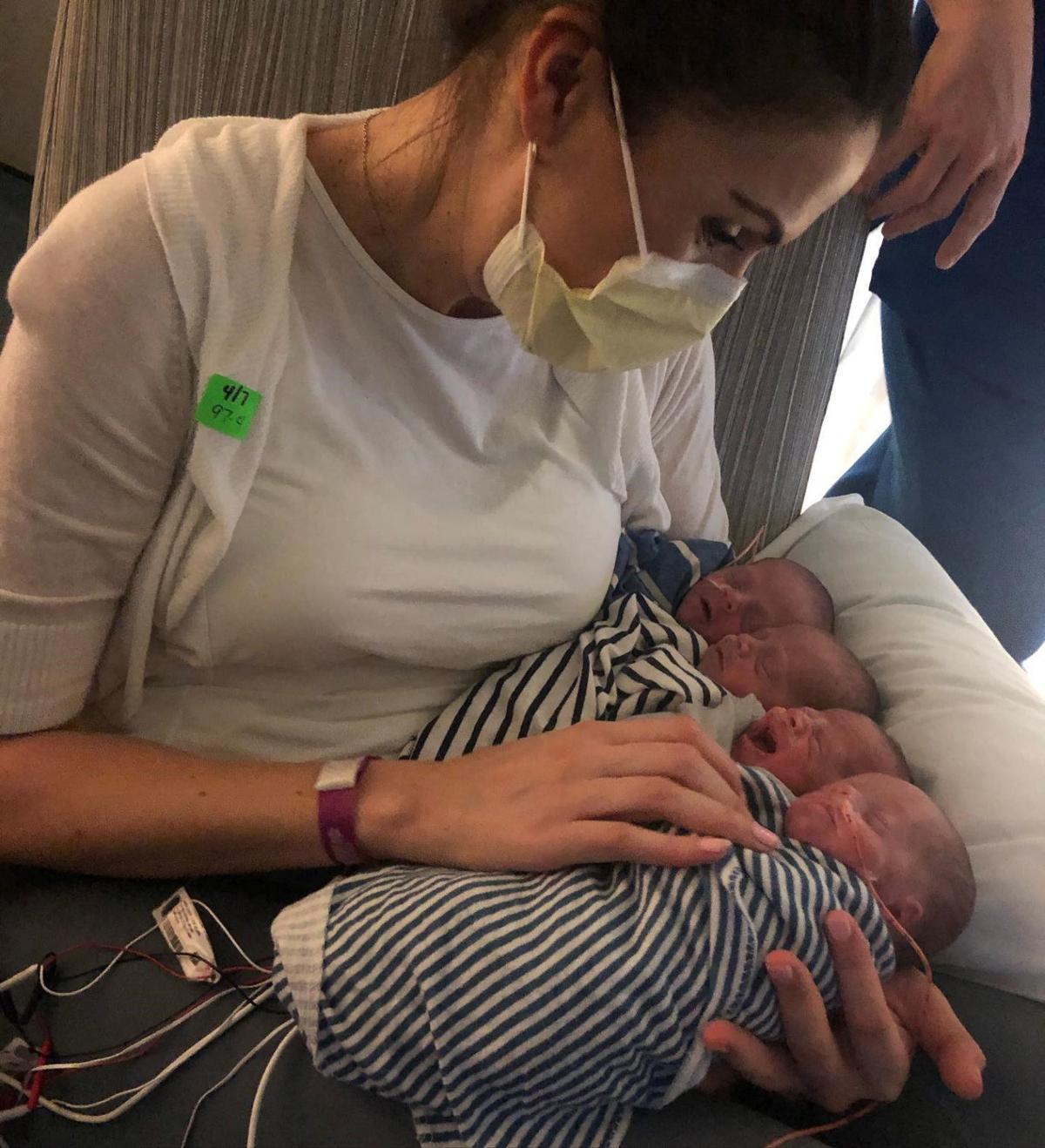 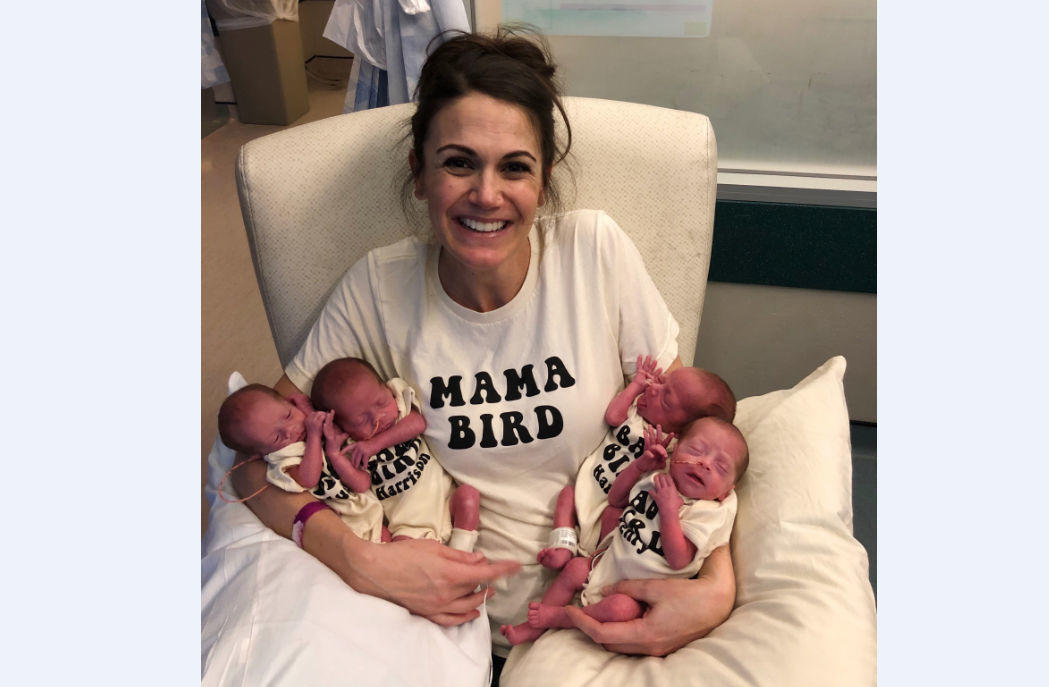 Jenny Marr with her 1-month-old sons at the Texas Health Presbyterian Hospital Dallas, where the quadruplets stayed for two months in the neonatal intensive care unit after their birth on March 15. MUST CREDIT: Family photo. 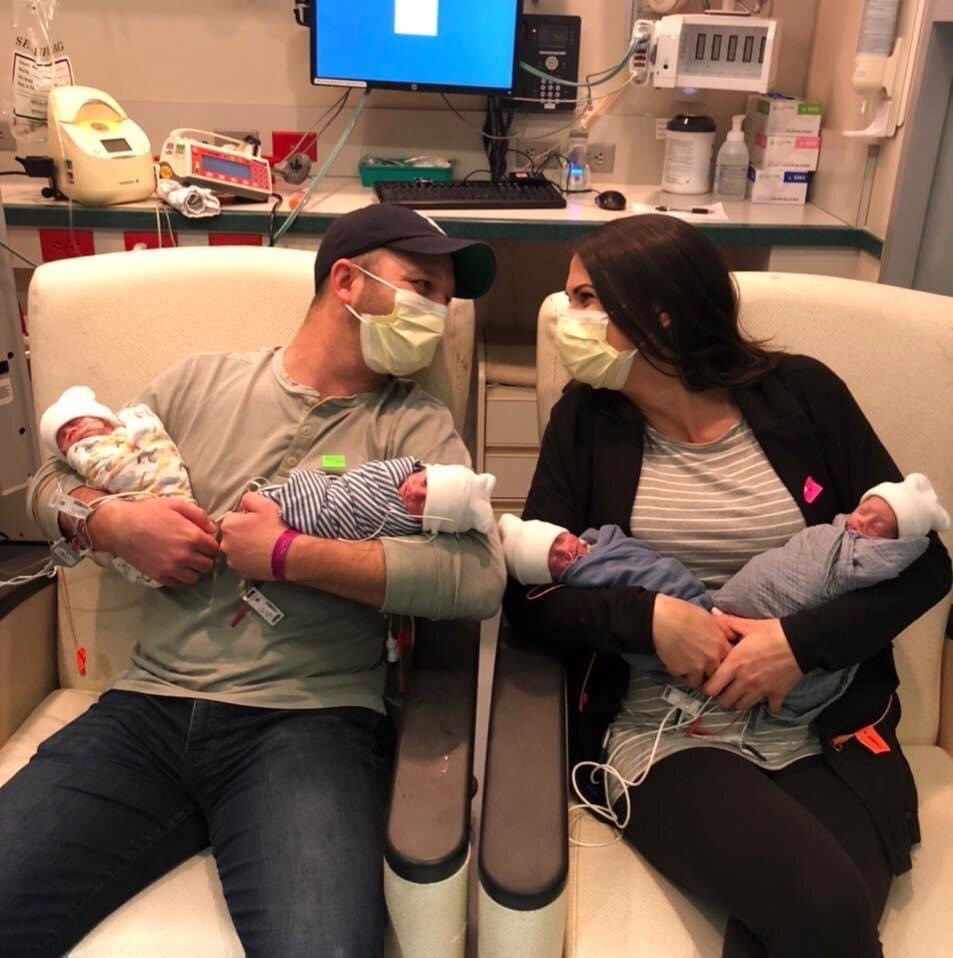 The first time Chris Marr and his wife, Jenny Marr, were able to hold all four of their sons at the same time. (Family photo)

On Jenny Marr’s 34th birthday, she and her husband decided it was time to start trying for a baby.

Both only children, Jenny Marr, 35, and her husband, Chris Marr, 35, live in Dallas. They would have been happy with just one child — a compact family of four, including their dog, Zeke.

On Oct. 6, she took a pregnancy test: It was positive.

The couple, yearning to hear the sound of a steady heartbeat, began counting down until they would finally see their baby on a sonogram screen.

Little did they know, though, that they had not one, not two, not three, but four heartbeats to hear and four sonogram images to study.

Jenny Marr was carrying a quartet of medical marvels: identical monochorionic quadruplets, of which there are only 72 cases recorded in medical literature, according to her obstetrician, Lauren Murray.

Naturally, the first ultrasound was far from what the Marrs had anticipated.

At just over 10 weeks pregnant, Marr went in for her first OB appointment. Her husband sat next to her as Murray spread gel over Marr’s still-small baby bump.

“Dr. Murray began doing the sonogram, and all of a sudden she got this funny look on her face and turned the screen away from us,” said Jenny Marr. “I immediately started thinking something was wrong with the heartbeat. I told her it was OK and that she could tell me if there was a problem.”

“Oh, no, there’s definitely a heartbeat,” Murray responded. “Actually, there are three babies in there.”

Murray turned the screen toward the couple. At that moment, Chris Marr’s face went ghost white and he passed out, said Jenny Marr.

After about six minutes of shock and silence, the tears started streaming for both parents-to-be.

“It sounds horrible to say, but I don’t know if it was necessarily tears of joy. We were completely overwhelmed and frankly, terrified,” said Chris Marr.

“The fact that we didn’t have any medical intervention, and no history of multiples in either of our families, made the news a total shock,” said Jenny Marr.

Still, they had another surprise in store.

One week later, after the Marrs had somewhat digested the new reality that they were having three babies instead of one, they went to see a high-risk-pregnancy specialist, Brian Rinehart, who practices maternal fetal medicine at Texas Health Presbyterian Hospital Dallas.

“Yet again, the sonographer got this weird look on her face,” said Jenny Marr. “We asked her what was taking so long, and she told us that she wasn’t supposed to say since she’s not a doctor. But she ended up blurting it out anyway, something along the lines of: ‘Y’all, there are 100 percent four babies in there.’”

“That’s when three became four,” said Chris Marr. “I told Jenny we shouldn’t go to our next appointment because they’ll just keep multiplying,” he added, laughing.

The couple had somewhere in the range of a 1-in-11 million to 1-in-15 million chance of conceiving these babies, Rinehart said.

“Twins, triplets and even quads have gone way up with assisted reproductive technologies. But naturally conceived, identical monochorionic quadruplets is something we just don’t really see,” Rinehart said.

Identical monochorionic quadruplets occur when a fertilized egg splits in two, and both cells split again. Unlike fraternal twins, which come from separate eggs and implant independently, identical multiples are lumped together, sharing one placenta.

Any pregnancy is risky, he said, but in this case, the risks are multiplied by four.

“Pregnancy, even with one baby, is hard on the body. Four is just ridiculous,” Rinehart said. “The body is simply not made to do that.”

For the mother, carrying multiple babies comes with the increased risk of high blood pressure, gestational diabetes and other health issues.

For the babies who share a placenta, there is an increased risk of uneven distribution of blood flow, resulting in one or more of them not receiving adequate oxygen and nutrients.

“It’s kind of like survival of the fittest,” said Murray. “The babies need to share the placenta evenly in order for all of them to survive.”

Chris Marr was riddled with fear and worry for the majority of his wife’s pregnancy, he said.

“When you Google ‘monochorionic spontaneous quadruplets,’ there’s not very much data, and the data that’s there doesn’t point to many good outcomes,” said Chris Marr, who works in the real estate investment industry.

His wife, however, remained optimistic the entire time.

“I just decided from the beginning that I was going to stay positive and roll with the punches,” said Jenny Marr, who was manager at a dental practice before she had the babies.

“Her attitude and emotional bandwidth to deal with the situation was exceptional,” Murray said. “It’s overwhelming enough to have one baby.”

Fortunately for her, the pregnancy was smooth, and the babies grew equally, until the final curveball came: the coronavirus pandemic.

On March 15, at 28 weeks into her pregnancy, Jenny Marr went into early labor, just when covid-19 protocols were being put into place and hospitals across the country were preparing for the worst.

That was the first time she really let herself worry.

But the C-section was successful, and within three minutes — Harrison, Hardy, Henry and Hudson — came into the world.

“It’s exhilarating every time I deliver a baby,” Murray said. “But to deliver identical quads was just incredible.”

All four boys came out strong and healthy, and even the tiniest baby — weighing 1 pound, 15 ounces — didn’t require oxygen support.

All four stayed in the neonatal intensive care unit for several weeks to be monitored, until the last Marr boy arrived home last week.

The Marr parents said they’re relishing every moment with their boys, watching as they grow and change every day.

“They all have such different personalities already,” said Chris Marr. “It’s incredible to watch.”

Even so, “we confuse them from time to time,” said Chris Marr.

On a recent afternoon, the couple sat in their living room, looking over their squirming babies.

“I still can’t believe we created these tiny humans,” said Jenny Marr. “All in one shot.”