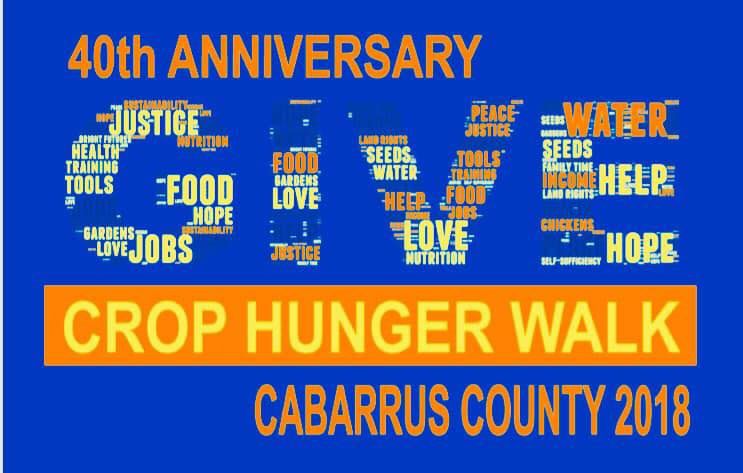 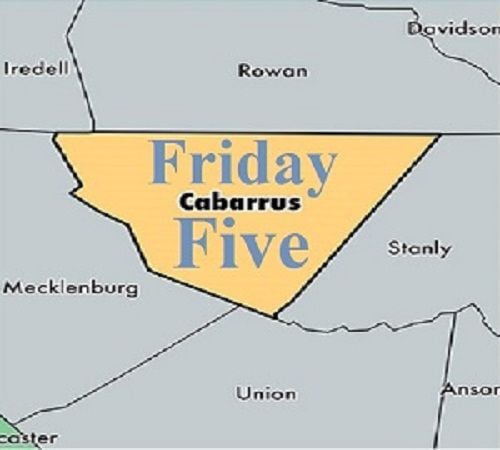 Today’s Friday Five will be pretty random, ranging from Sunday’s CROP Walk in Kannapolis to a personal rant against telemarketers.

Several thousand dollars will be raised and a lot of canned food items will be collected for local food pantries.

It’s not a race, but occasionally some people will run. There are two lengths, one mile and three miles. Registration begins at 1 p.m. and the walk begins at 2 p.m.

I like to keep score so here is how the teams are stacking up so far (as of 1 p.m. Thursday):

My team, McGill Baptist, is way back at $50. We’re sandbagging. Look out Methodists and UCCers, the Cooperative Baptists are charging from the back.

You can get more information by calling Lorie Williams at 704-490-4245 or email lwilliams@cooperativeministry.com.

To donate on-line or to see how the teams are ranked currently you can go to www.crophungerwalk.org/cabarrusnc.

It’s a small world after all. Now it’s stuck in your head too. You meet some interesting people in the hospital and that was the case this week as we sat with Kim’s mother at St. Joseph’s Hospital in Asheville.

My wife Kim, as many of you know, is the program chair for the Associate Degree Nursing Program at Cabarrus College of Health Sciences. She has lots of experience in nursing, having worked at Memorial Mission, Presbyterian and University hospitals after studying nursing at UNC-Chapel Hill and UNC-Charlotte (I keep the hyphen to annoy the 49ers fans) before coming to Cabarrus.

An AB Tech nursing student and his instructor came into the room. Turns out the nursing instructor (didn’t get her name, sorry) grew up in Cabarrus County and now teaches at AB Tech. Guess where she was a candy-striper? Cabarrus Memorial Hospital (before NorthEast Medical Center).

I thought it was a funny twist.

For those not familiar with AB Tech. It is Asheville Buncombe Technical Community College. It’s like Rowan-Cabarrus Community College, or as I like to call it R-C cubed or Harvard by the Highway.

Nicknames. Sometimes nicknames are good and sometimes we don’t like them. I’ve had several hung on me over the years. Marcus Welby MD. Mark Flye. Marty. Plemmonade.

The first is from the TV show. My mom hated people calling me Marcus or spelling Mark with a C. “It’s not what we named you and it’s not the way they spell it in the Bible.”

My brother Luke used to get called Lucas McCain (played by Chuck Connors) from The Rifleman. Mom didn’t like that either.

Mark Flye came from a Richmond Spiders basketball player. Former IT sports editor Donnie Biggers saw Flye the basketball player at the old Charlotte Coliseum (Independence Arena, Bojangles Coliseum or whatever they’re calling it now). Donnie said he looked like me except a lot taller, so he and former IT editor Dale Cline started calling me “Mark Flye” and sometimes just “Flye.”

Plemmonade comes from Avery dorm in Chapel Hill. My suitemates hung that one on me the first week I got to UNC.

Someone slipped a baggy of white powder under our door with a note attached, “When life gives you Plemmons, make Plemmonade.”

I didn’t understand. I thought it was drugs. All the folks at church kept telling me what evil was out in the world and I thought they were trying to suck me into the vortex of evil.

A couple of weeks later I realized it was lemonade mix. Duh!

My dad always called me “Marty.” His nickname was Bird or Wiley Bird. I don’t know where that came from.

Another group of his friends we knew call Daddy “Lightning.”

They were putting hay in the loft of the barn and lightning struck the tin roof near where Dad stacking the hay. Needless to say it scared him pretty bad and he was “Lightning” from then on.

The devils they call telemarketers. File this under hypocrite.  I actually have done telemarketing before and made decent money at it. I really didn’t like the work, nor do I like telemarketers calling me now.

My cell phone labels some of the incoming calls as “Likely Scam.” I appreciate that.

The ones I hate are the ones that don’t have the courtesy to be on their end when I answer. It goes something like this:

“Hello this is Mark Plemmons.”

These calls ought to be illegal.

The real devils are the telemarketers who prey on the elderly. They call Mom all the time. I tell her just hang up unless it’s someone you know.

But she listens to them and then tells them she will have to talk to me first. She then calls me and tells me all about it.

She explains it again.

It goes on like this for a while until she finally agrees with me. “Well that’s what I thought but I wanted to be sure.”

Need a job? Search for “call center” or “telemarketing” and you will come up with lots of job offerings.

Two in Concord popped right up: Lionel, LLC and TTEC.

One job posting says, “Consult customers…” Another says, “Answer in-bound calls and make outbound sales calls.” I like model trains but I don’t want anybody calling me on the phone to ask me buy one.

They have to find their customers somewhere I guess.

At least if you have to call, please be on the line instead of the “beep.”

If you have a Friday Five or a story idea email mplemmons@independenttribune.com.

The biggest perk in working for a newspaper is all the wonderful people you meet. I met a bunch of folks this week backstage at the NorthEast …

Relief may be on the way for one traffic headache in Concord; the messy intersection of Cabarrus Avenue/Union Cemetery Road/Concord Parkway (U…

It might be hard to imagine what traffic is going to look like when all the projects currently underway are completed.