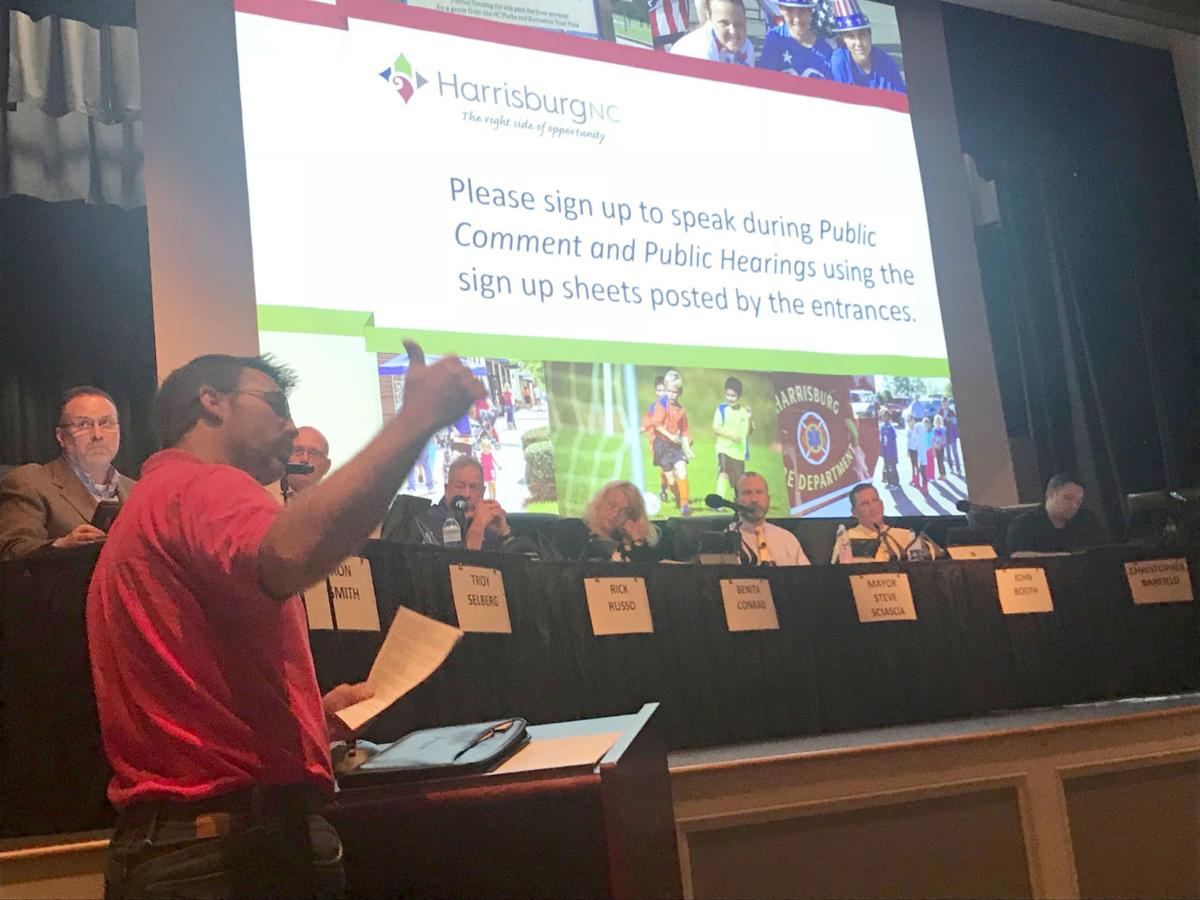 Neighbors were given a chance to speak their minds about the proposed development during the public hearing portion of the meeting. Most wore red and were opposed to the development. 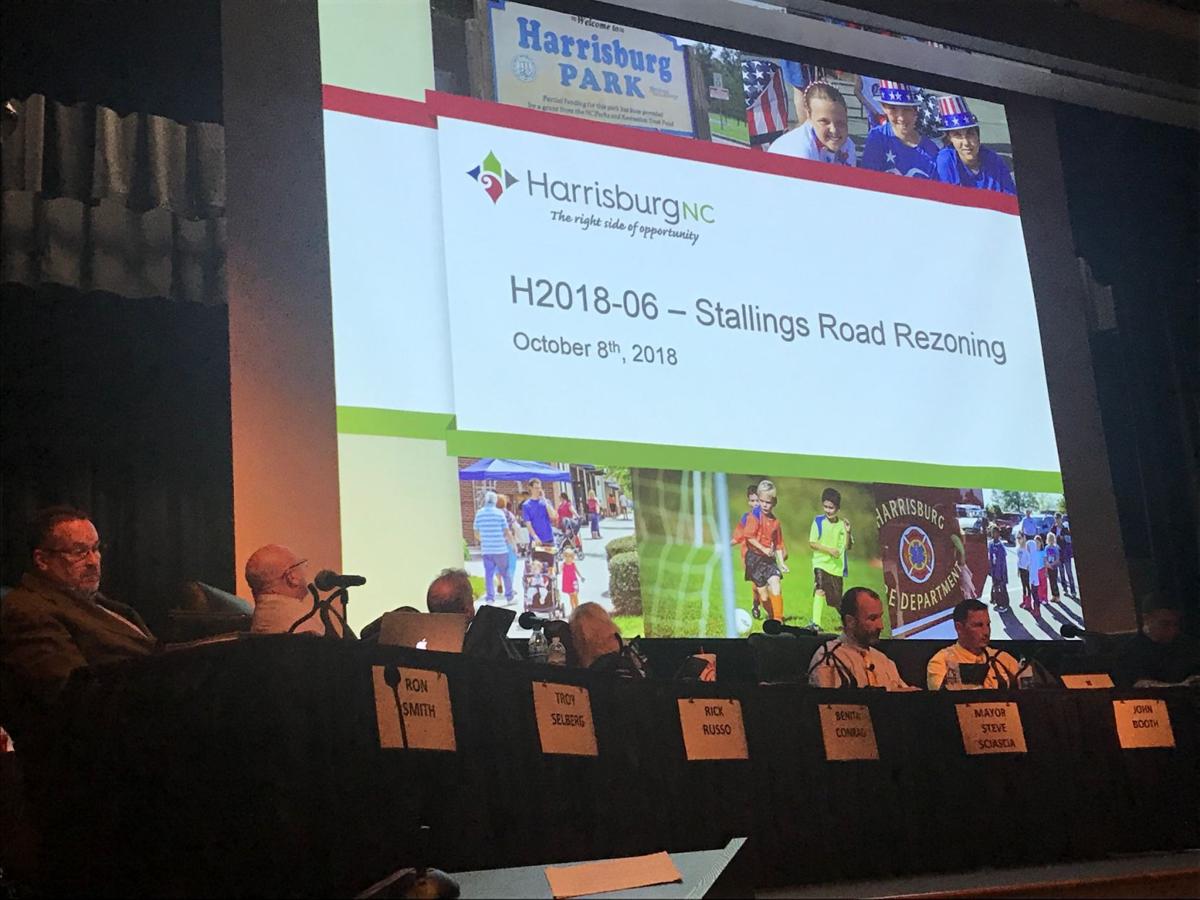 Harrisburg Town Council approved a rezoning request for over 82 acres on Stallings Road and to move forward with a new subdivision project.

Neighbors were given a chance to speak their minds about the proposed development during the public hearing portion of the meeting. Most wore red and were opposed to the development.

Harrisburg Town Council approved a rezoning request for over 82 acres on Stallings Road and to move forward with a new subdivision project.

HARRISBURG- After passionate arguments from neighbors, yelling and an audience member being escorted out of the meeting by a deputy, Harrisburg Town Council voted 4-3 to move forward with a proposed development project on Stallings Road.

Community members wearing red and stickers that had the words “High density” crossed out packed the auditorium of Hickory Ridge High School on Monday, Oct. 8 to express their concerns over the development and await council’s decision. The meeting was moved to the high school because of the anticipated number of attendees.

Residents of Stallings Farm and Flowers Farm have been fighting the proposal that would put 191 single-family homes with 2.33 of those homes per acre next to their neighborhoods.

Since they became aware of the proposal, the citizens have expressed concerns saying it is “high density housing” and will add more traffic, put stress on already overcrowded schools and diminish property values.

Overview of the project

A public hearing on the proposal was originally scheduled for the council’s September meeting, but was moved to the October meeting because council was waiting on two pieces of missing information; summary notes from neighborhood meetings and an updated Traffic Impact Analysis (TIA).

During the Monday meeting, Town Manager Haynes Brigman gave an overview of the project to council and the audience.

The request from the developer was to rezone 82.05 acres located at 3550 Stallings Road and to permit the development of the 191 single-family dwellings with 97 lots to be age-restricted for 55 and older.

Zoning within 500 feet of the property is zoned RL, Cabarrus County LDR, RE, RM-1 and OI (Office and Institutional).

Brigman said the Future Land Use Plan lists the area in question as Medium Density Residential with a density range of three to four dwelling units per acre. The plan recommends the area be zoned RV and RM-1.

After discussions with staff and the town’s Planning and Zoning Board, Brigman said the developer agreed to change the RC (Residential Compact) area of the proposed development to RM-1 (Residential Medium Density) to meet the Future Land Use standards.

He also said that through various studies, the town determined that it has adequate police, fire and sanitation services available for the additional neighbors and that the Cabarrus County Schools district has new schools planned over the next five years that will help with the overcrowding.

Comments from the public

During the public hearing portion of the meeting neighbors made their case against the development. Many said they don’t believe the subdivision meets the town’s Unified Development Ordinance (UDO) requirements.

Many accused council of already having their minds made up before the meeting, and questioned if they were correctly following the town’s laws and procedures.

Two speakers asked council members to vote by raising their hands, so the audience could see who was for and who was against.

“It comes down to are we trying to put the wrong product at the wrong spot? I think that’s what everybody’s frustration is. Why are we forcing the issue?” speaker Patrick Rhyne said. “This is a everybody issue. This effects everybody in here. We simply ask you to take the information and input of people who have come here to say, ‘Listen to our voices.’ Please do the right thing.”

Speaker Robert Dellinger also told council that the right thing for them to do was to vote down the project. He then asked them if they could lay their heads down each night knowing they have followed the governing laws of the town.

“Please don’t get me wrong. The residents of Harrisburg are still very concerned about the number of homes that are placed on an acre lot and will continue to do so,” Dellinger said. “However, we are just as concerned that the protocols and procedures have been met.”

Dellinger then turned toward the audience and talked to his “neighbors in red.” He told them that whatever the outcome of the vote, they should not get mad.

“Our case has been presented. It is strong,” he said. “We have done our research. You have supported with your attendance, emails and finances in saving Harrisburg, and I have no doubt you will continue to do this in the future.”

He then told the citizens of Harrisburg what they could do to continue to stand against future developments like this one. He encouraged them to attend council meetings, Planning and Zoning Board meetings and neighborhood meetings.

Then he went a little further.

“Will you stay or will you go? Just think if 500 people put their homes on sale in Harrisburg. What impact would that have on this town? What would it say to people trying to come to this town? What would it say to builders and the homes that they’re trying to build now?” Dellinger said. “Then finally those of us that continue to stay can spend our dollars in Charlotte or Concord. So in closing, what will Harrisburg be? You can help make that decision.”

After listening to the public comments— which one man tried to continue by walking up the podium and talking over council after the public hearing was complete before being escorted out by deputies— council voted 4-3 to rezone the land and move forward with the project.

After the decision was made, each council member took a moment to share some thoughts on the development and the public hearing process.

As audience members yelled back at her in response and some walked out, council member Benita Conrad told the audience this was not an easy decision. She said before the vote Monday she reread all of the emails she received concerning the project and while some were thoughtful and considerate, others were offensive and disrespectful.

She said some of the emails suggested the council was committing illegal acts.

“I know this is the direction that the national media and the rest of the nation is taking on national politics, but this is not Harrisburg. I’d like to say if this is, then we’ve already lost that small town feel,” Conrad said. “And to imply or even come right out and say that to live in a good neighborhood with good neighbors you must live in an all brick house on a half-acre lot; that’s extremely prejudice and many of the folks making those suggestions don’t live on a half-acre lot in an all brick house. So I don’t really understand where they are coming from.”

Conrad said her family moved here 40 years ago and even at that time Harrisburg was growing. She added that many people in the audience also moved there to be close to Charlotte but to reap the benefits of the smaller town with great schools.

She said they were all able to move to Harrisburg because of farmers selling their land to be developed and it is unrealistic to think that the town will stay small.

'Small town' is about how you treat people, not about size

I think I speak for all Councilmembers in saying we ran for Council in order to serve and we all take that responsibility very seriously. In o…

I am a Harrisburg resident whose lot adjoins the Stallings property recently rezoned by the town council. I don’t doubt Benita Conrad’s love f…