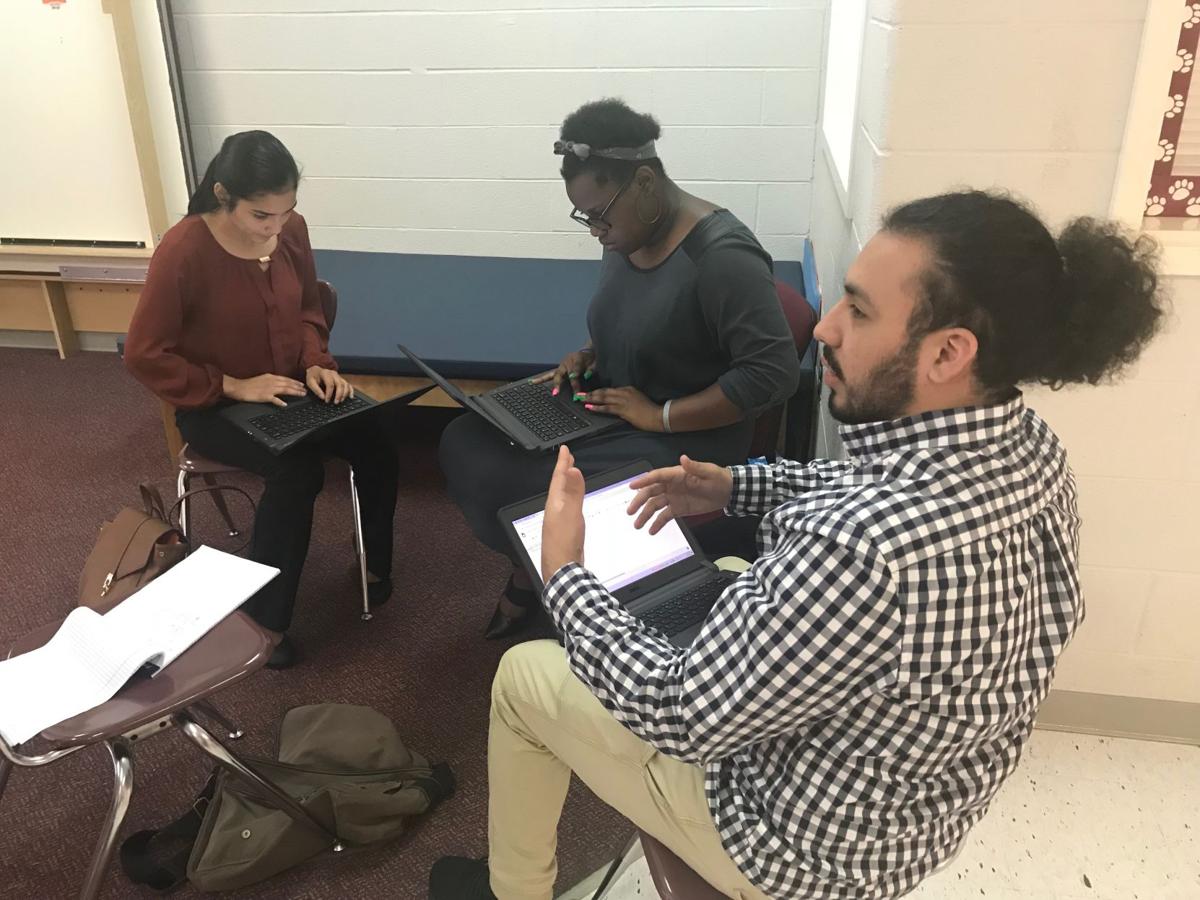 Interns from schools across the county are working together to find solutions for need seekers, mostly people with disabilities and special needs. 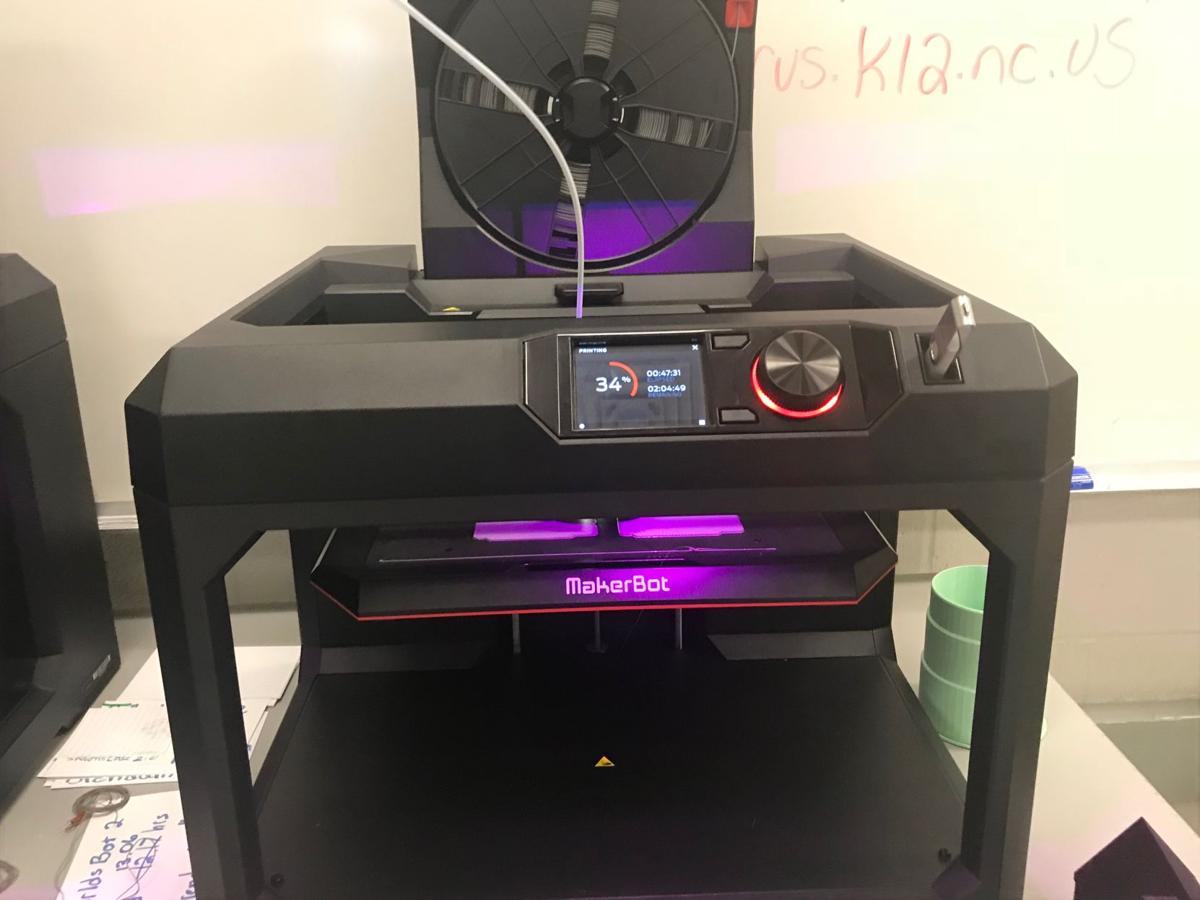 The students will use 3D printers at Jay M. Robinson High School to print the solution devices. The printers were purchased by the school's Academy of Engineering and Automation thanks to a grant from the Jimmie Johnson Foundation. 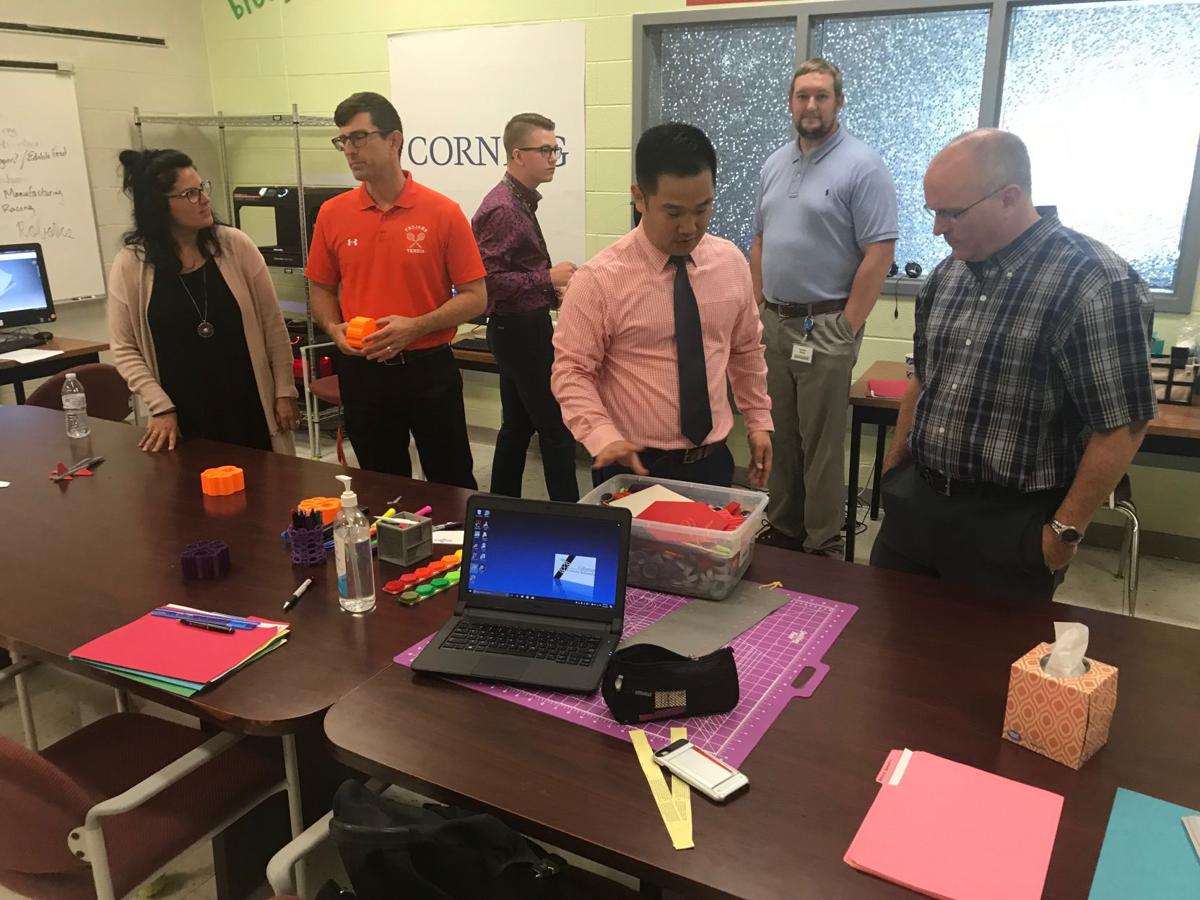 Stakeholders get a tour of the Fab Lab on the internship's launch day last week.

Interns from schools across the county are working together to find solutions for need seekers, mostly people with disabilities and special needs.

The students will use 3D printers at Jay M. Robinson High School to print the solution devices. The printers were purchased by the school's Academy of Engineering and Automation thanks to a grant from the Jimmie Johnson Foundation.

Stakeholders get a tour of the Fab Lab on the internship's launch day last week.

Plenty of students use the summer months to pursue internship opportunities. Internships are the best way for students to learn about careers they might be interested pursuing in the future, and to get college and high school credit.

Every student that is part of one of Cabarrus County Schools National Academy Foundation (NAF) academies is required to complete an internship as part of their curriculum.

Internship opportunities run the gamut, but academy coordinators decided to give students a special one this summer; the Fab Lab.

What is the Fab Lab?

The Fab Lab internship launched last week and 22 students from across the county are spending part of their summer at Jay M. Robinson High School developing solutions for people with disabilities.

“Over the next three weeks, we are going to try to be a driving force in the community for change and positivity,” Robert Machado, coordinator of the Hickory Ridge Academy of Hospitality and Tourism, said at the Fab Lab kick off last week. “We were trying to find a way we could reach out to our partners we already have on our advisory boards. How could we get these students in some real world situations where they can go out there and impose some change? So we came up with this idea of the Fab Lab.”

It all started with a grant from the Jimmie Johnson Foundation. Jay M. Robinson’s Academy of Engineering and Automation received a grant from the foundation to the tune of over $51,000 that allowed staff to purchase 10 3D printers.

Academy coordinator Kristi Parlier said they wanted to use the 3D printers to create something meaningful, so they came up with the idea of the Fab Lab to get students their internship hours, teach them about the business world and give them interactions with a different segment of the population.

Through a donation of $3,500 from S&D Coffee and Tea, Parlier said she was going to be able to hire about eight students from Jay M. Robinson to participate since the internships are required to be paid.

But then the academy received a $10,000 donation from Corning, Inc. that allowed staff to open the applications to students from other schools.

Students applied for the opportunity and 10 seats were offered to Jay M. Robinson students and two seats from each of the other schools with academies. At the end of the required 120 hours, the students will receive certifications through NAF.

Volunteers from DecisionPathHR are also volunteering their time to help the students learn how to clock on and off, and conduct personnel reviews just like a business would in the real world.

But even with all of the new technology the students are using and the professional environment, the focus of Fab Lab is simple; help those in need.

On the day of the launch, the students met their need seekers. They interviewed them and talked about what they need to help enhance their lives.

“It’s called the Fab Lab, or fabrication lab, because of the 3D printing. With the Engineering and Automation Academy here, that’s what they do by nature. We said how can we use what we already have and how can we got out and do some positive things?” Machado said. “We Came up with this idea, let’s try to partner with some people who might need some help , and have something made for them. There’s nothing on the marketplace today to help them get where they need to be, so what can our students do to help them do that? So we have people coming in, engineers from Corning and professors, here to help students out and talk to those folks and try to figure out a solution.”

Testimony from the students

On the day of the launch, students from each of the academy spoke to stakeholders about their experience so far and what they hoped to get from the internship. Since they are working with people with special needs, the students attended sensitivity training the day before the launch.

“Yesterday we did sensitivity training activities and when I was in their shoes or asked to participate, I did feel frustrated at some points and I realized that these kids go through a lot of different things throughout our day that seem so basic but isn’t,” Paula Torres, a Hickory Ridge student, said. “And I’m really proud of them, because I don’t think I personally could handle all that stress put onto me every single day.”

Allison Ward, who is vice president and communication’s lead at Northwest Cabarrus High School’s Academy of Health Sciences, said she and her fellow Trojans have learned how to use new technology through this process.

“For this internship, my colleagues and I are all gaining a better understanding of the technology that goes into design and operation of the 3D printers,” she said. “We also hope to learn how to apply this technology and work together as a team in order to improve the lives of others, specifically those with disabilities.”

Jay M. Robinson student Trinity Martin talked about her experience in the Academy of Engineering and Automation and the fun she and her fellow students have when using the 3D printers.

She said at first they just wanted to use them because they were cool to play with.

“But then most of us realized, while we are doing this for fun we can impact other people’s lives. I didn’t know so much on a daily basis isn’t as normal as it is for everybody else,” she said. “I realized people have things going on that we don’t even notice and if we can create something to help them, then we should because at the end of the day we are not only impacting our lives we are impacting others.”

To wrap up the presentation, Mackey Burke from the Mount Pleasant Academy of Energy and Sustainability shared that his experiences in the classroom have given him a direction.

“This is probably for the first time in most of our lives, at least from what I’ve seen, that we’ve had an opportunity. We’ve been able to come together using our different skills sets thanks to NAF to make something great for these people in need and actually help them,” Burke said. “Before any of NAF even started, I really never really had a certain direction. I never knew what I wanted to do in life. But now thanks to NAF I’ve come through and I’ve found what I kind of want to accomplish. I think all of us are kind of getting a general feel for what we want in the fact that we can help people.”

Tori Brasher, assistant principal at Rocky River Elementary School, brought her children Liam and Chloe to the launch of Fab Lab. She hopes the high school students can create and print items that will make her children’s lives easier.

Brasher said Liam suffered severe malnutrition as a baby so his body is disproportionate. Because of this, he can’t wash his hands on his own.

“He can’t wash his hands and he fusses every time. They are actually going to create attachments for our sink so he can wash his hands,” she said. “We are really excited. He’s grown up a lot but he didn’t start walking until he was 20 months old so he’s trying to catch up. I have an older son who I adopted as well, and he can’t do what the older brother does. So I’m very excited about him being able to wash his hands by himself and turn on the water and turn it off and reach the sink.”

Chloe, who Brasher also adopted, was born very premature and has issues with her fine motor skills. The students are going to use the Fab Lab to design custom-made blocks so she can work on gripping.

The need seekers have a variety of disabilities, such as issues gripping things like pens and pencils. Christopher Illiano, a student in Cox Mill High School’s Academy of Information Technology, said for that person they came up with an idea for a device that straps to his hand and uses a magnet to connect with the items.

Illiano said he has worked with people with special needs before, but this internship is completely different.

“The sensitivity training was really nice, we learned a lot. I’ve worked with disabled children before, but never gone into that deep of sensitivity training. I’ve realized I have to do different things than what I normally do,” he said. “I‘m not in a casual basis anymore. I’m in a business perspective. They are my clients. I have to make something for them. It changes the perspective on it but it’s still a really nice experience to know that I’m doing something to change someone’s life.”

The students plan to reveal and give their devices and inventions to the need seekers on Thursday, June 28.

The room at Jay M. Robinson was buzzing with excitement and some nervous jitters last week as students waited to present their creations to st…