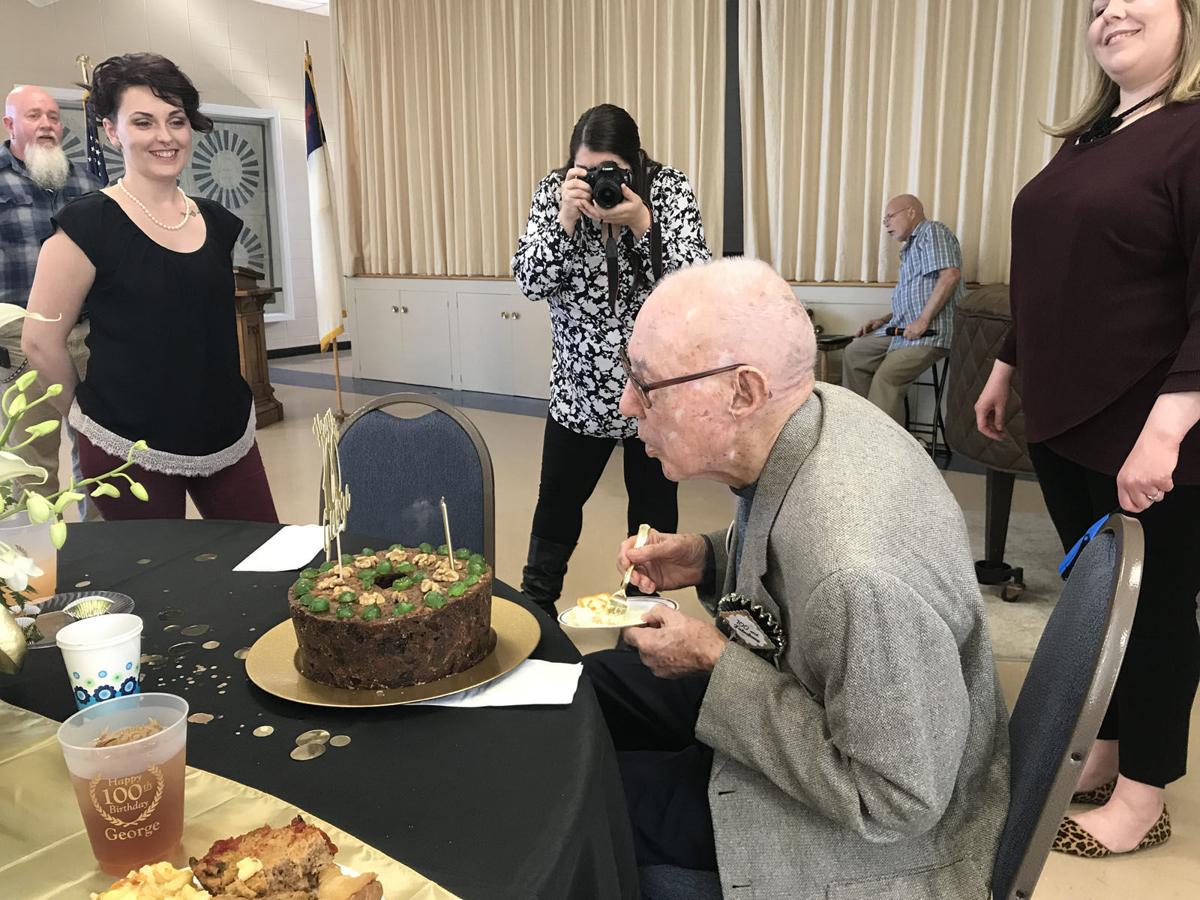 George "Buck" Perry blows out his candles at his 100th birthday party Saturday. 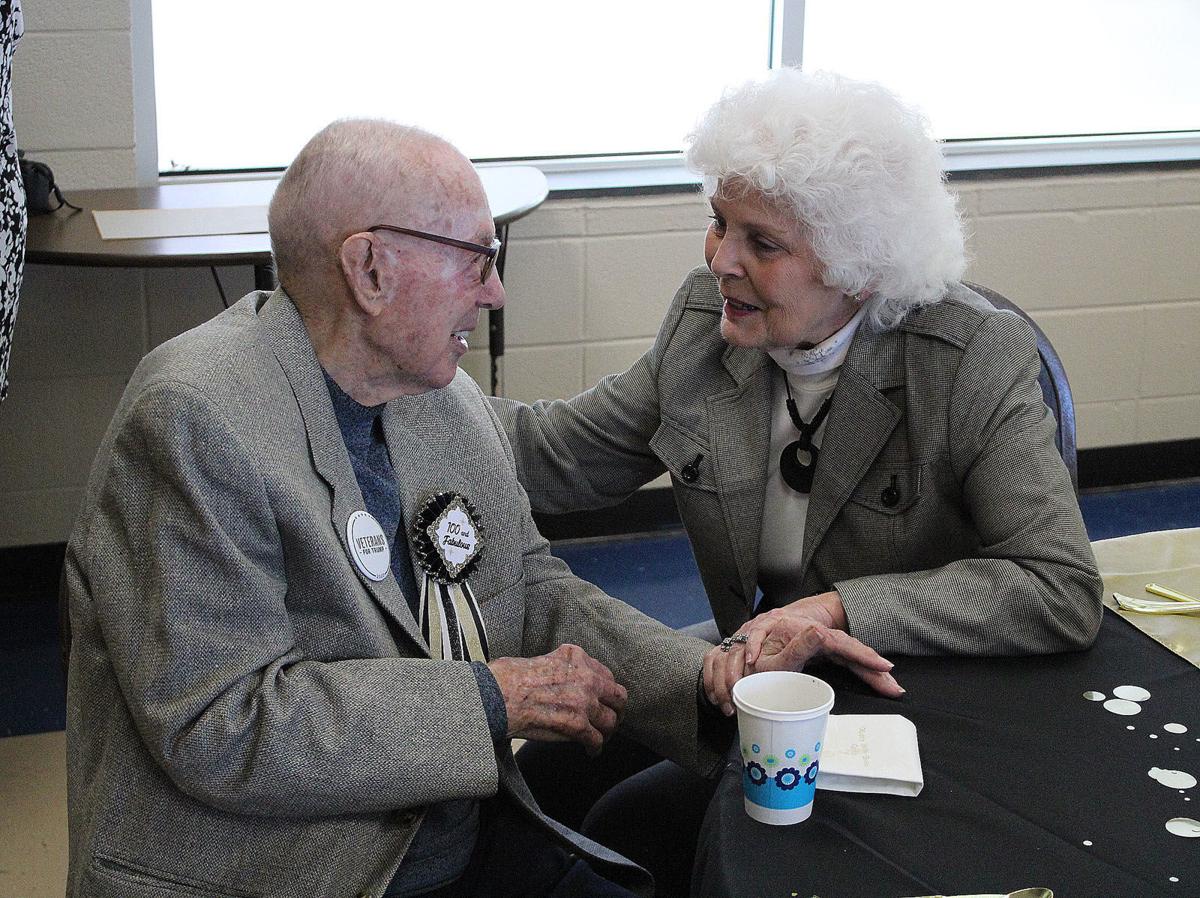 George (left) sits and talks at his party on Saturday. 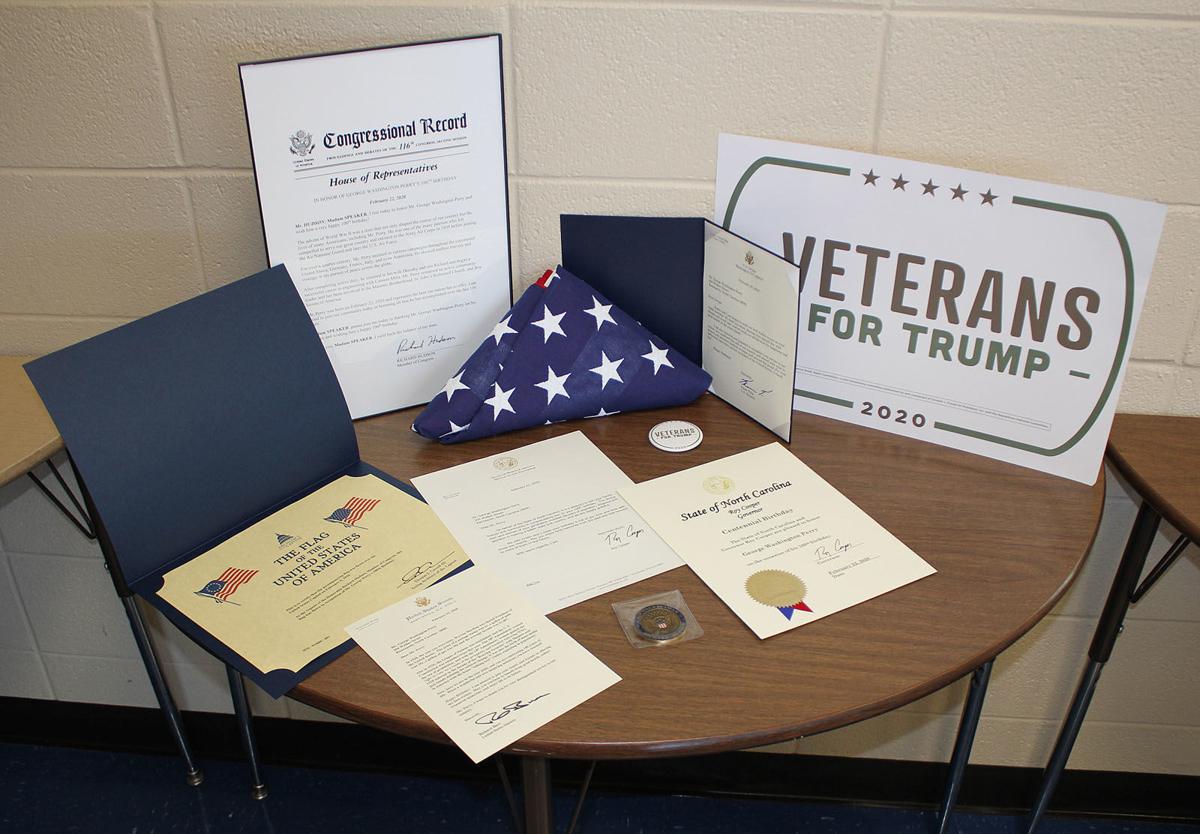 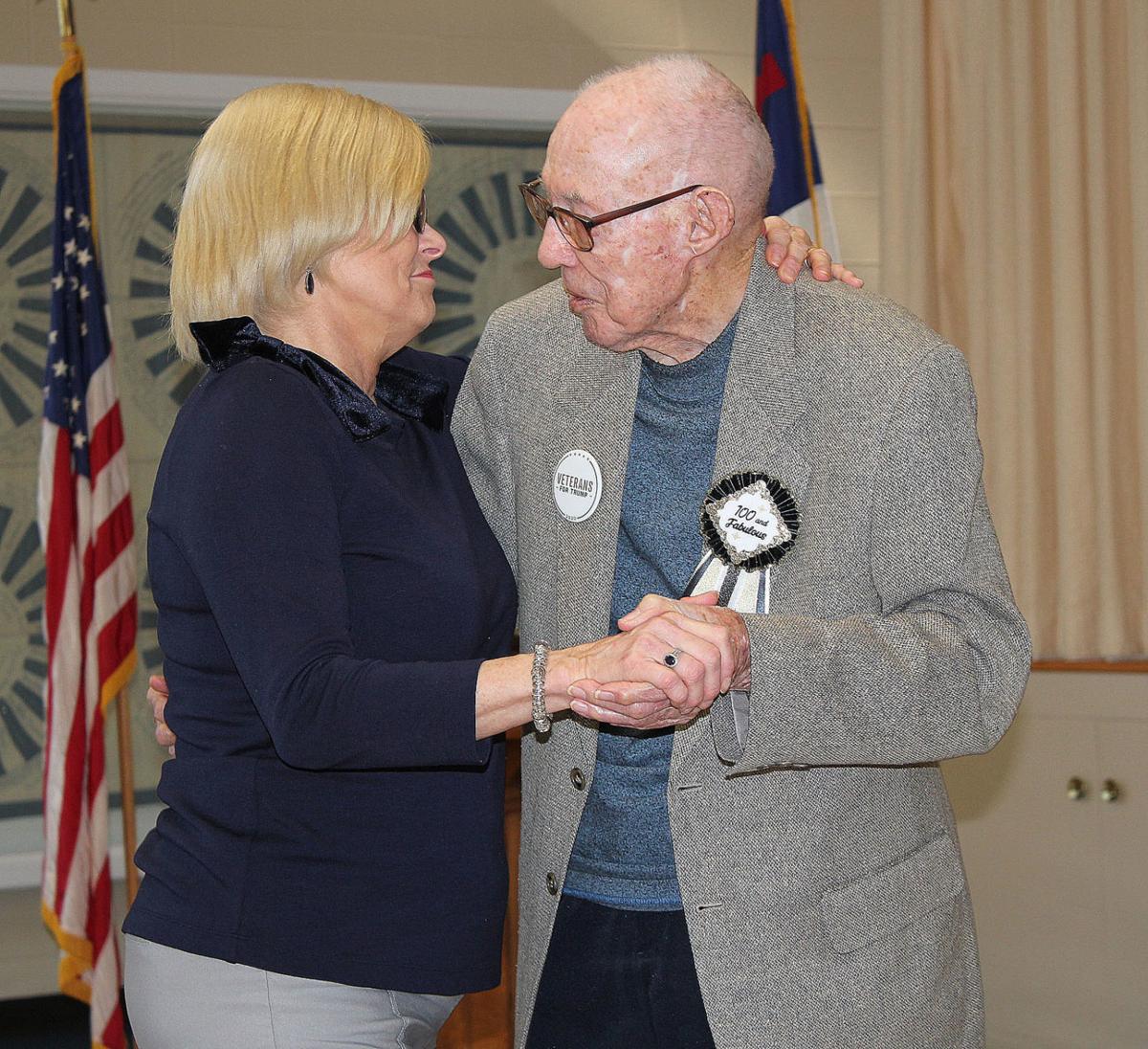 George dances at his party. He still takes time on Wednesdays every week to go out dancing.

If there’s a secret to living for 100 years, George Washington Perry isn’t giving it out. But if there’s anything to learn from him, it’s that a sense of humor certainly can’t hurt when living a long, happy life.

Perry, a veteran of World War II, who was a gunner as part of the 31st Interceptor Squadron, celebrated his 100{sup}th{/sup} birthday Saturday in Kannapolis, receiving honors from U.S. Rep. Richard Hudson, Gov. Roy Cooper and Sens. Richard Burr and Thom Tillis, while surrounded by generations of his family, which includes great-great-grandchildren.

The man they affectionately refer to as “Buck” isn’t moving as fast as he used to, but he is still a bundle of energy as Friday he was rifling through old photos, looking for images of his past showing trips to both World War II and the Korean War, and 30 years of military service. He doesn’t act like his life has been any more special than anyone else’s, but he does believe God was trying to show others that someone from humble beginnings can live a long, healthy and happy life.

“Really no secret to how long you’re going to live; it’s up to the Lord,” he said. “In other words, he can take you any time, and I don’t know what he uses, but I never could figure out why he was keeping me around so long.

“See, I started out small at 2½ pounds, and I guess he just wanted to show me that a baby that was starting out at 2½ pounds could make it to 100 just like anybody else.”

Perry lives by himself at a house in Kannapolis, but that hasn’t taken away anything from his energy. He still goes out Wednesdays for dancing, and he even went to get his driver’s license renewed this week.

He said he has to live another five years now because that’s when he has to renew his license again.

That is George Perry. He is constantly cracking jokes and giving a glimpse into who he was as a younger man. He was married to his first wife, Dorothy “Dot,” for 55 years. After she died in 2000, he remarried soon after and then hit the road. He and his second wife, Betty, whom he met in a support group for widows and widowers, almost immediately started traveling after they were married in 2001.

Perry is a man who traveled from very early on in his life and clearly still has an adventurous side to him. He even considered walking down the steps on his back porch on Friday after it had snowed and iced over the day before.

His great-granddaughter, Ruth Bollinger, and great-niece, Melannie Tyson, made sure to reel him in to make sure he didn’t hurt himself, but he still wants to do everything on his own. He still drives, he doesn’t use a walker or a cane, and he was up and dancing at his birthday party Saturday.

He truly has lived a remarkable life and remains a remarkable man who fought for his country in two wars. He spent years as a gunner on a B-17 bomber in World War II and flew in 35 missions, every single one of which saw his plane take damage.

His squadron would go out with 600 to 1,000 planes in formation, with about 60 or so getting shot down on each mission. His bomber was once so damaged it wasn’t able to make it back to England and had to touch down at a landing strip in France.

It was a harrowing experience, but as Perry seemingly does with everything in his life, he found a way to make the best out of his situation.

“The Germans, I’m sure they had somebody watching that little airbase there, so they come over and strafed where he had the airplane parked, and they put that on fire, so we didn’t get that airplane back,” he said. “But we had a pretty good time over there for three or four days.

“They fed us good; we could sleep as long as we wanted to, because when we had a mission, we usually had a get-up call at 2 or 3 o’clock in the morning.”

Perry’s time as a gunner saw a lot of action. One mission resulted in 44 holes in the right main fuel tank, and another saw them abort due to the turbo chargers failing midway through a 10-hour flight. They had to turn around and come back on their own, with no protection. It was a nail-biting mission, but one they did make it back from.

He eventually left the war after five years, seven months and two days. A month after he returned home, he met Dot. Four months after that, he was married. He then went back into the Air Force, spending time all over the nation as well as several years stationed in Turkey.

Finally, after 30 years and 30 days in the Air Force, he retired at the age of 50 and came back to Kannapolis. He then did what so many in the city did during that time. He went to work at Cannon Mills, where he got a job in the engineering department. He went to school at Rowan Tech and received an electrician certificate.

At that point, he was spending a lot of time with Dot and took care of her as she battled Alzheimer’s disease until her death in 2000. He then married Betty and was with her for another 17 years, until she died in 2018.

He had one son, Richard, who served in the Air Force for 20 years as well. Richard died in 2005 after a battle with ALS.

Perry is alive to see his great-great-grandchildren and has been helped out a lot recently by Bollinger and Tyson, who were at his home Friday helping him search for old photos. They helped set up his 100{sup}th{/sup} birthday and contacted many of the representatives around the state so he could be honored. The opportunity to help out with something like this is not lost on them.

“It’s priceless,” Bollinger said. “He doesn’t think anything grandiose of it, but for anybody that knows anything about World War II at this point, or who has heard stories from uncles who are children of soldiers that fought or whatever it is, a lot of people don’t understand the gravity of it anymore, and so to personally have somebody to hear the stories from who created the stories and went through it, fought for us (is amazing).”

Before Perry’s 99{sup}th birthday, Tyson took the time to write a biography of the man. George joked he didn’t think he’d make it to 100, so he was happy to tell her about his past. She found many of the stories and put them in writing for the family to see and was pivotal in helping tell the story here. (We have attached that story as well).

She didn’t want anything from Perry’s time to be lost and wanted to share what a special life this man has lived.

“I’ve enjoyed it,” she said. “I feel like, not only am I honoring him, I’m honoring my grandmother and my parents as well, and you know, I think he’s part of the greatest generation, and there’s very few of them left.

“And also with my job, we work on quality of life, and it’s just amazing because I think he takes one medicine, and he takes a bunch of supplements, and so it’s just been amazing to watch him. He took care of both of his wives. I mean, I remember when he was taking care of Dot, and he would pick her up, never had a bed sore, she stayed at home … and it was just amazing the care that he took for her. And the same thing with Betty, she started declining about a year before she died, and he took care of her … but it’s just amazing, his life and what he’s accomplished.”

Perry only has one more goal in his life. He wants to meet President Donald Trump. He hasn’t heard anything back yet, but if anyone knows a way to help, this is the one last thing he wants.

Well, he probably wouldn’t mind renewing his license one last time, but this would certainly be the icing on the cake for what has truly been an extraordinary life.