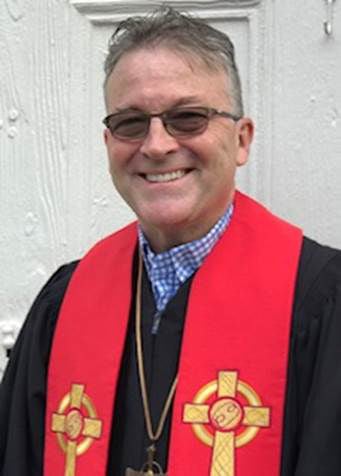 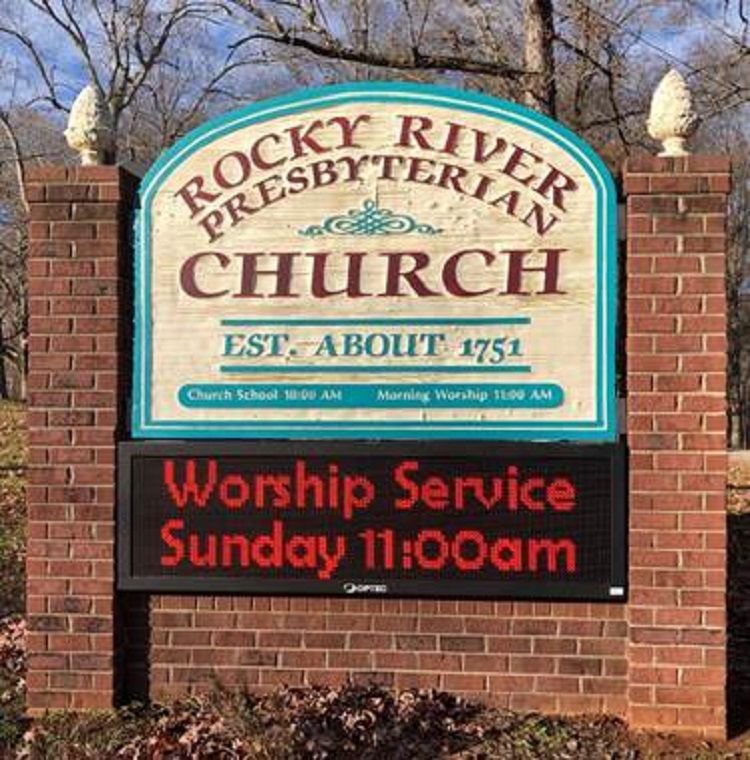 In 1751, Presbyterian pastor John Thompson from Philadelphia began preaching to people in what we now call Cabarrus County. In the west, under the shade of a poplar tree, Poplar Tent Presbyterian Church was founded. Further south, Rocky River Presbyterian Church also organized. These Colonial congregations, second only in age to St. John’s Lutheran Church near Mount Pleasant, remain active and vital. Rocky River is an historic congregation with its better days ahead.

The current brick and wood sanctuary dates to 1860. The simple, rectangular building includes a balcony, which originally seated slaves. The sanctuary pews and furniture are well-preserved antiques.

Reflecting its rural heritage, the congregation also hosts an annual barbecue and a farmers market.

About 150 multi-generational and diverse worshipers gather in the sanctuary at 11 a.m. on Sundays. The traditional worship comes with many smiles. Visitors receive a loaf of bread. Some men wear coats and ties, while others khakis and sports shirts. Most people sit on the main floor, but a few in the balcony. Guests often attend.

The service begins simply with a child chiming the hour. The pastor and choir wear robes and stoles. A lively piano accompanies the music. The congregation sings out of the 1990 Presbyterian hymnal.

Strong laity help lead the service, including the reading of Scripture and the children’s time. The congregation follows the lectionary, a series of Scriptures coordinated with the Christian year. The worship service is recorded and shared weekly via podcast.

The congregation has active ministries with both children and youths. Sharon Vanpelt, the Christian educator, leads the ministries with children. A nursery each week is staffed by volunteers, while elementary-age children engage in godly Play, an interactive curriculum that links hands-on activities with biblical topics.

Youths, led by J.D. McNutt, gather on Sunday mornings and Sunday and Wednesday nights. The youths occupy a large space on the ground floor that they are remodeling in youth fashion. Youth mission trips regularly include over 20 people.

Pastor Carter arrived at Rocky River in 2016. Carter grew up off South Union Street in Concord and attended Concord First Assembly Church, where he met his wife. The opportunity to come home to Cabarrus County was a major part of his decision to accept the call to Rocky River.

During college, Carter moved to the Presbyterian Church, U.S., and attended Duke Divinity School and Princeton Seminary. He has served as a pastor for over 20 years, primarily in eastern North Carolina. His experience as a worship leader and preacher shines through. The15-minute sermons clearly sync the Scripture of the day to the needs of the congregation.

Engaged throughout our growing community, Carter is a frequent acoustic guitarist at local open-mic nights from Charlotte to Concord. A national Presbyterian publication recently wrote about Carter building guitars with one of the church’s youth. Carter also leads a Bible study, Theology on Tap, each month at the Percent Tap House in Harrisburg. In December, he opened a Carolina Panther football game with a prayer.

The congregation is vitally engaged in missions to their community. They regularly host suppers at The Salvation Army Night Shelter in Concord, ring bells for the Army at Christmas, have an Angel Tree for veterans, and work closely with Rocky River Elementary School to assist with children in poverty. The weekly food pantry serving many people is modeled on a grocery store complete with shopping carts.

Thanks to Neal Carter for assistance with this article. For more information, go to www.RockyRiver.org.

Andy Langford is a newly elected member of the Concord City Council. He is the former pastor at Central United Methodist Church and has been visiting many local congregations to discover the richness of Cabarrus County’s places of faith.